This article or excerpt is included in the GLP’s daily curated selection of ideologically diverse news, opinion and analysis of biotechnology innovation.
When futurist entrepreneur Elon Musk discusses his vision for Mars colonization, he speaks about delivering 80,000 settlers initially, and eventually millions to the Red Planet. That’s very different from most other well-publicized Mars colonization advocacy groups, like those of the Mars Society, or Mars One, whose plans are for transporting much smaller populations to the Martian surface with the idea that this will eventually stimulate a gradual increase in colonists from Earth.

Whether any of these plans come to fruition is somewhat doubtful—Mars One has been criticized as being nothing more than a reality TV show. But its overall strategy of sending just a few pioneers sounds somewhat feasible at least compared to Musk’s given the hardware and fuel requirements of sending anything (or anyone) across interplanetary space.

Sending a handful of people certainly could serve as a proof of concept analogous to America’s Spanish and Portuguese outposts in the early 1500’s, or the English and Dutch settlements in the early 1600’s. In these instances the populations measured in the dozens and would not have amounted to a lasting European presence had they not been followed by thousands of new settlers over the next few decades. But, given our more advanced technology, our level of medicine, the idea that humans could have equipment that will utilize the Martian environment to produce food, air, and other consumables, and the certainty that settlers will not be at war with the Martian equivalent of the Aztecs or Incas—couldn’t a Martian settlement survive long term with just a low number of colonists?

The answer is no—not if the goal is a permanent human presence. Not if the goal is to provide our species with some kind of extinction insurance against planetary disaster on Earth, such as a mega-volcanic eruption, nuclear war, or some other existential threat. Mars setters can use technology to get air and food from the Mars environment, but early European explorers in the New World had access to one natural resource that mid-21st century Mars colonists will not be able to manufacture: a human gene pool.

If we really want Martian colonies, we can’t send just a few Adams and Eves. We can’t set-up a Martian Jamestown of 100 people. Long-term survival will depend on the genetic diversity of a large gene pool, and this means the Elon Musk plan of sending thousands might be the only colonization plan that could work. 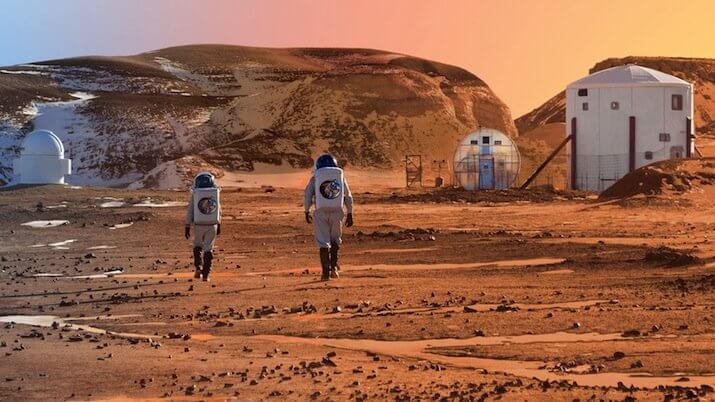 A gene pool is exactly what it sounds like. It’s a collection of all the genes of a population, meaning all of the alleles—different forms of genes that children inherit from their parents. A well established principle in population genetics states that a population’s ability to survive over the long term, depends on its adaptability, which depends in the diversity of genes and alleles in the gene pool. Among humans that interbreed on Earth, there is tremendous diversity, but if we pluck out just a small sample of that population and place it on Mars, the genetic diversity of a population descending from those people will be extremely low. It’s called the founder effect, it’s thought to be the reason for the emergence of certain genetic diseases, such as Tay-Sachs and Gaucher disease in Ashkenazi Jews and Ellis–van Creveld syndrome in Amish people, and is one of the main sub-types of a genetic sampling error, called genetic drift, that acts as a force of evolution.

Related article:  Have humans reached the end of evolution? Not under these 3 scenarios

In human history, there have been many founder and bottleneck events. They have helped to shape evolution of the gene pool of different groups of humans, but they’ve also wiped out populations.

How to keep gene pools healthy

Along with a large starting population with genetic diversity, another phenomenon from population genetics that would be beneficial to a Martian population is gene flow. This is kind of the opposite of genetic drift; it means adding new diversity to the gene pool, which in this case means new immigrants from Earth. This sounds intuitive, and certainly either in the Musk scenario, or in a more modest Mars colony plan, new settlers would be arriving generation after generation. But we’d want to avoid starting off with a low population and reproducing with that even for the first couple of generation. Most people today know that it’s bad to reproduce with one’s cousin.

To take a more extreme example, imagine a scenario like the 1970’s TV comedy, Gilligan’s Island; seven people are marooned on an island. If they never get rescued, suppose two characters—Ginger and the professor, Gilligan and Maryanne—get together and have children. After a couple of generations, everyone will be homozygous for multiple genes (have two copies of the same allele) as opposed to heterozygous (two different copies). That might lead to a surprisingly high number of redheads (if Ginger’s red hair was natural). But when it comes to recessive (need two copies of disease causing allele) diseases, decreasing the level heterozygosity in a population is also a very serious thing. With a small enough population in just a few generations, diseases would appear that were never even known before, and in studies using non-human animals with short generation times, it’s been demonstrated that low rates of heterozygosity correspond to robustness of the population as a whole. This totally dovetails with the idea that small population size and low genetic diversity put populations at risk.

While all of this may sound speculative, it’s not. It’s based on hard genetics that have been quantified, not specifically for Mars colonization, but for the scenario of humans settling across interstellar space. Portland State University anthropologist Cameron Smith has calculated that for the gene pool of human colony on a planet of another star to be healthy enough to enable long-term survival, a minimum of 10,000 colonists, preferably 40,000, will be needed.

To be sure, Smith’s interstellar scenario doesn’t match perfectly with a Mars colonization setting, in which continuing waves of settlement from Earth can be the norm. Still, the settlement cannot be dragged out too much. From the beginning, the gene pool will have to be large and diverse enough to make the first settlements worthwhile. Otherwise, the settlers will either be returning to Earth and it will be a false start, or the early generations will be on shaky genetic ground and will need to be replenished with new immigrants from Earth anyway. So, along with breathable air, food, our culture, ambition, and technology, human genes will be among the most valued commodity of early Martians.

One strategy that appears to sway vaccine reluctants: Appeals to faith