This article or excerpt is included in the GLP’s daily curated selection of ideologically diverse news, opinion and analysis of biotechnology innovation.
Finally, the FDA weighed in on Golden Rice, with its May 24 announcement approving it for use in the United States. This approval, just a few months after Canada, Australia and New Zealand’s agencies issued theirs, is largely symbolic, since the International Rice Research Institute, now the makers of Golden Rice, have no intention of selling the product in the United States.

However, an FDA approval carries a lot of gravitas worldwide, and the decision is being met with attempts by anti-GM groups to discredit the nutritional value and usefulness of Golden Rice.

Just after the FDA’s approval, Independent Science News, a website known for its opposition to genetic engineering and recombinant technologies, published an article headlined “GMO Golden Rice Offers no Nutritional Benefits Says FDA.” Sustainable Pulse, another anti-GM organization reprinted the article, focusing on a misleading nutritional fact that both groups (among others) have perpetuated:

But, in a surprising twist, the US Food and Drug Administration (FDA) has concluded its consultation process on Golden Rice by informing its current developers, the International Rice Research Institute (IRRI), that Golden Rice does not meet the nutritional requirements to make a health claim.

This has been a common criticism of golden rice from groups like ISN and Greenpeace, which argue the approved version of Golden Rice doesn’t have enough beta-carotene, the precursor to Vitamin A, to make a nutritional difference. Instead, these groups advocate planting bananas, carrots, spinach or sweet potatoes, none of which are as affordable or even practical in places suffering from Vitamin A deficiency.

The article, written by ISN Executive Director Jonathan Latham and Assistant Editor Allison Wilson, pointed to a line in the FDA approval letter that observed that “the version of Golden Rice approved, called GR2E, contains very little of the key ingredient, beta-carotene. Worse, even the little that it does contain rapidly degrades during storage. For the reasons, FDA has told its developed…that no health claims may be based on it.”

The FDA did state that. Also, Health Canada wrote that “Replacement of all rice and rice products in Canada with GR2E rice would result in a very small 0.8-8% (34 µg-239 µg per day) increase in ß-carotene intake.” But a health claim is not the same thing as a nutrition statement. So the FDA and Health Canada statements don’t translate into “no nutritional value,” nor does it mean that, as Latham and Wilson wrote, “the tradeoff experienced by the Golden Rice project between beta-carotene production and yield in its various GMO rices has not been resolved.”

The FDA also has since rebutted Latham and Wilson’s article, saying the claim of “no value” is misleading. In the comments section of the ISN website, this response was posted from Marianna Naum, communications team lead from the FDA’s Office of Food and Veterinary Medicine:

It is unfortunate that the statement you reference in our letter responding to BNF 158 has been misconstrued to suggest that there would be no value of the pro-vitamin A in golden rice for its use in the countries where it is intended for distribution.

Our statement applies only to labeling considerations in the United States, in that golden rice contains insufficient pro-vitamin A to warrant differential labeling for nutrient content based on the low levels of rice consumption in the U.S. Requirements for nutrient content claims on labels in the United States take two factors into account, the amount of the nutrient needed as well as it’s concentration in the food and the typical or average level of that food consumed in the U.S. For the rice to be labeled in the United States with a claim containing provitamin A, our regulations stipulate that the food must contain 10-19 percent of the RDI or DRV for the substance per reference amount customarily consumed (essentially a measure of consumption).

Additionally, U.S. consumers eat rice at very low levels compared to consumers in the specific Asian countries with vitamin A deficiency for which golden rice was developed. IRRI reports that consumption of rice by children in Bangladesh is 12.5 g/kg body weight/day, compared to about 0.5 g/kg bw/d for U.S. consumers). Rice is the major staple in those countries and levels of rice consumption are many-fold higher than they are in the U.S. While a U.S Consumer would be unlikely to eat enough of the rice to achieve that value (10-19 % of the NDI or RDA), that does not mean that the level of consumption of golden rice in the targeted countries would be insufficient to accomplish the intended effect of supplementing their very low consumption of vitamin A-containing foods. Consuming rice containing the levels of pro-vitamin A in GR2E rice as a staple of the diet could have a significant public health impact in populations that suffer from vitamin A deficiency.

The FDA, Health Canada and even Australia and New Zealand were looking at overall safety, and applying nutritional claims to their own, healthy populations. The Vitamin A/beta-carotene deficiency targeted by Golden Rice do no exist in those nations. That’s why IRRI has no intention of introducing Golden Rice to these industrialized countries—it does want to introduce it to countries, especially in Asia, that are experiencing high levels of Vitamin A deficiency among children and infants, killing up to two million children every year and making hundreds of thousands of them go blind. 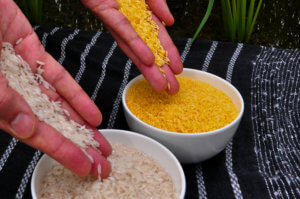 In a letter to Latham that was obtained by the Genetic Literacy Project, Golden Rice Humanitarian Board Executive Secretary Adrian Dubock pointed out that these “first world” agencies did not access the nutritional benefit of added beta-carotene in developing countries. That’s because no recommended daily allowances exist for developing countries. So, the FDA considers a “nutrition claim” to address any food that has more than 10 percent of the daily RDA in a 45 gram serving. And golden rice doesn’t have that much carotene, but, as Dubock points out, it has enough:

Nutritionists calculate that 30-40% of the EAR (estimated average requirement) for a source of Vitamin A, consumed daily is sufficient to prevent the two separate morbidities of Vitamin A deficiency, blindness and the loss of a functional immune system,” Dubock wrote. “Only a few tens of grams of dry Golden Rice, when cooked and consumed daily, is expected to combat vitamin A deficiency and save life and site.

In countries throughout Asia that consume up to 300 grams of rice every day, this means a lot more beta-carotene could be consumed than in the United States, where even 45 grams might be a high figure. Rice is a much cheaper stape, and also much more affordable than meat and other animal products, and colored fruits and vegetables like bananas and carrots (the latter which was bred to enhance beta-carotene content, incidentally, in the 14th century).

Latham and Wilson’s article states that:

But, as Michigan State University plant biologist Chad Niederhuth wrote in a response to the article, these are comparing apples and oranges:

It is obvious in the FDA letter than beta carotene levels are considerably higher than that of normal rice. The FDA letter states that beta carotene in the non-Golden Rice controls was below the limit of quantification of 0.07 mg/kg, in Golden Rice it was 0.504 to 2.35 mg/kg…many times higher. Wilson and Latham never actually tell you how much higher Golden Rice’s beta carotene levels compared to equivalent consumed rice varieties. Instead they compare it to older versions of Golden Rrice or other crops like carrots.