“Civilization has been built on genetically modified plants.”
— Nina V. Fedoroff, Mendel in the Kitchen: A Scientists View of Genetically Modified Plants

Brilliant disruptor Michael B. Eisen has a provocative essay out recently titled “How GMOs Can Save Civilization and Probably Already Have.” While reasonable people may quibble with some of his minor points (specifically, his argument that we must all shift to plant-based diets), the paper is well worth a read, and his opening premise is indisputable: “It is safe to say that, without systemic genetic modification of crops and livestock, civilization would not exist.”

Ideological opponents to “genetic modification” are seemingly impervious to data and experience, and perhaps unaware of biological reality, but those interested in the facts of the matter are obliged to consider and weigh the evidence as we make decisions about, for example, the most environmentally friendly way to grow the food we eat. Some argue passionately for organic farming, claiming that “chemical/GM” agriculture (which they wrongly conflate) is despoiling the planet and consuming our children’s futures. Scientists have moved beyond this false dichotomy, finding that innovations in agriculture over the past 50-plus years, including some derived from organic farming but especially those based on genetic modification, have dramatically increased yields, improved safety, and reduced the ecological footprint of farming. There are those who continue to deny these realities, but their house is built on sand and the “ash heap of history” awaits. And settled as these issues are for those who respect data and experience, it is still possible for new work to reaffirm and extend these findings in ways that deserve attention.

Respected entomologist Galen Dively from the University of Maryland, together with nine colleagues from Maryland, Delaware, New Jersey, Virginia and Minnesota, has published such a paper. With the riveting title “Regional Pest Suppression Associated With Widespread Bt Maize Adoption Benefits Vegetable Growers,” these researchers describe positive environmental impacts from biotech-improved seeds that extend far beyond what most of us expected. 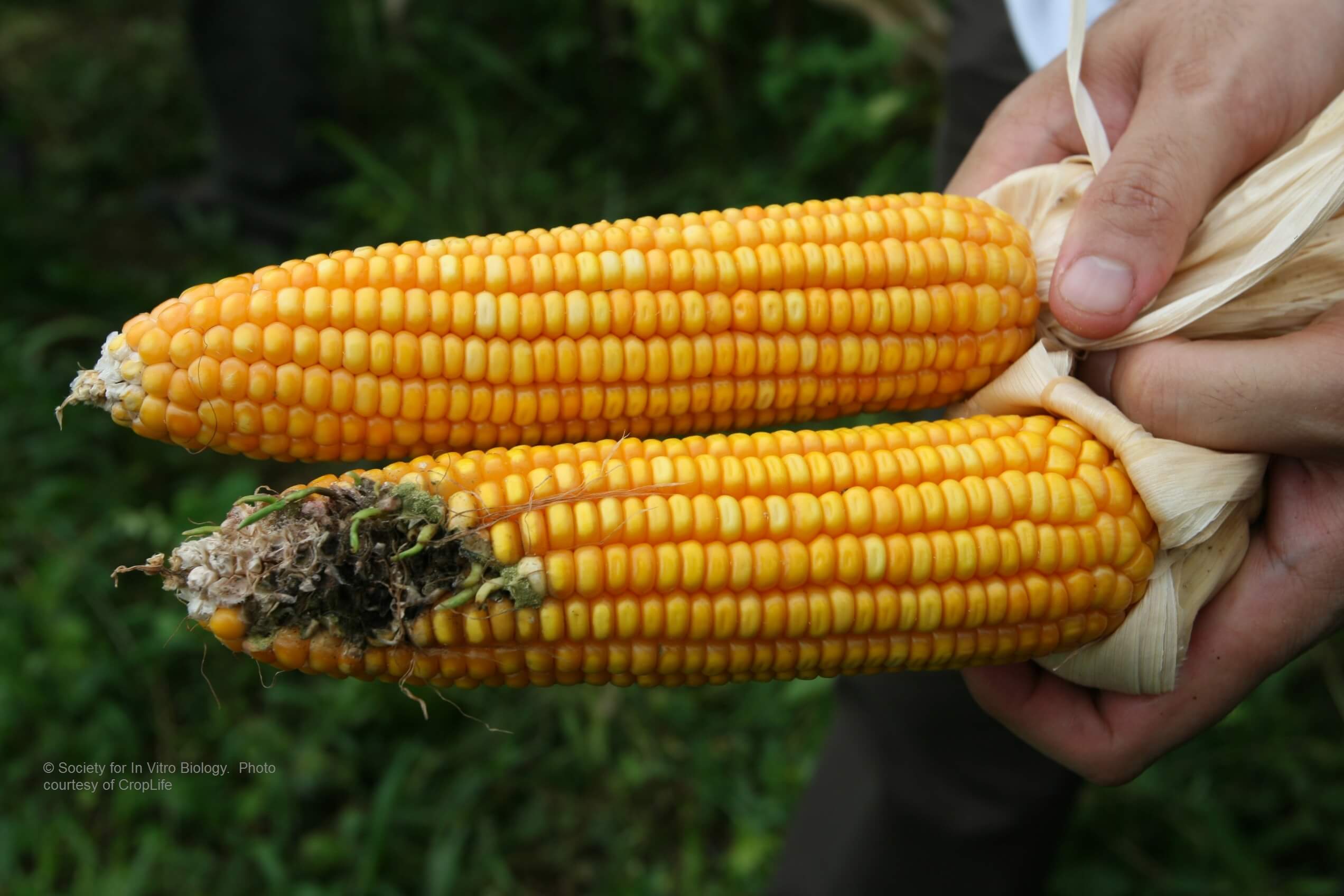 Like humans, certain insect species find corn to be an attractive food. Two such pests (among many others) are widespread and serious in North America: the European corn borer (Ostrinia nubilalis) and the corn earworm (Helicoverpa zea). Historically these plagues have been difficult to control, largely because they burrow into the corn ear, under the husk, where they are substantially protected from pesticide sprays or predators, as many of us who have shucked corn for a summer feast have discovered to our unpleasant surprise. But the incidence of such surprises has declined of late, as biotech improved corn varieties with inbred resistance to these pests entered and dominated the market between 1996 and 2016. Farmers love these biotech-improved varieties, because the pest resistance is packaged with the seed in the form of a protein that is lethal to the pest, but nothing more than demonstrably safe, added nutrition to humans. That protein is known as “Bt,” from the bacterial source, Bacillus thuringiensis. It has been a popular pesticide that has been permitted for organic farmers to use because it is derived from a common soil microbe, targets specific insect pests in a way that is safe for non-target insects and other organisms, and degrades quickly in the environment, lacking any potentially problematic persistence.

Farmer enthusiasm for this innovation has propelled the seeds to market dominance more rapidly than any other innovation in the history of agriculture, reaching over 90 percent market share in less than 20 years. The benefits to farmers are obvious: less pest damage, higher quality and quantity harvests, lower input costs (yes, the biotech-improved seeds cost more, but the savings from reduced pesticide spraying are greater), and less time managing the crop in the field. The benefits to consumers are similarly obvious—fewer unpleasant surprises, and substantial reduction in the presence of cancer-causing contaminants often found in pest-infested corn. This is an open and shut case. But these benefits, dramatic though they are, do not tell the whole story.

Those corn pests, the European corn borer and the corn earworm, are not just plagues on corn: They are serious pests for a host of other food crops as well, including most of the vegetables grown in the mid-Atlantic region. And this is where it gets really interesting.

“Moth populations of both species significantly declined in association with widespread Bt maize (field corn) adoption, even as increased temperatures buffered the population reduction. We show marked decreases in the number of recommended insecticidal applications, insecticides applied, and O. nubilalis damage in vegetable crops in association with widespread Bt maize adoption. These offsite benefits to vegetable growers in the agricultural landscape have not been previously documented, and the positive impacts identified here expand on the reported ecological effects of Bt adoption. Our results also underscore the need to account for offsite economic benefits of pest suppression, in addition to the direct economic benefits of Bt crops.” 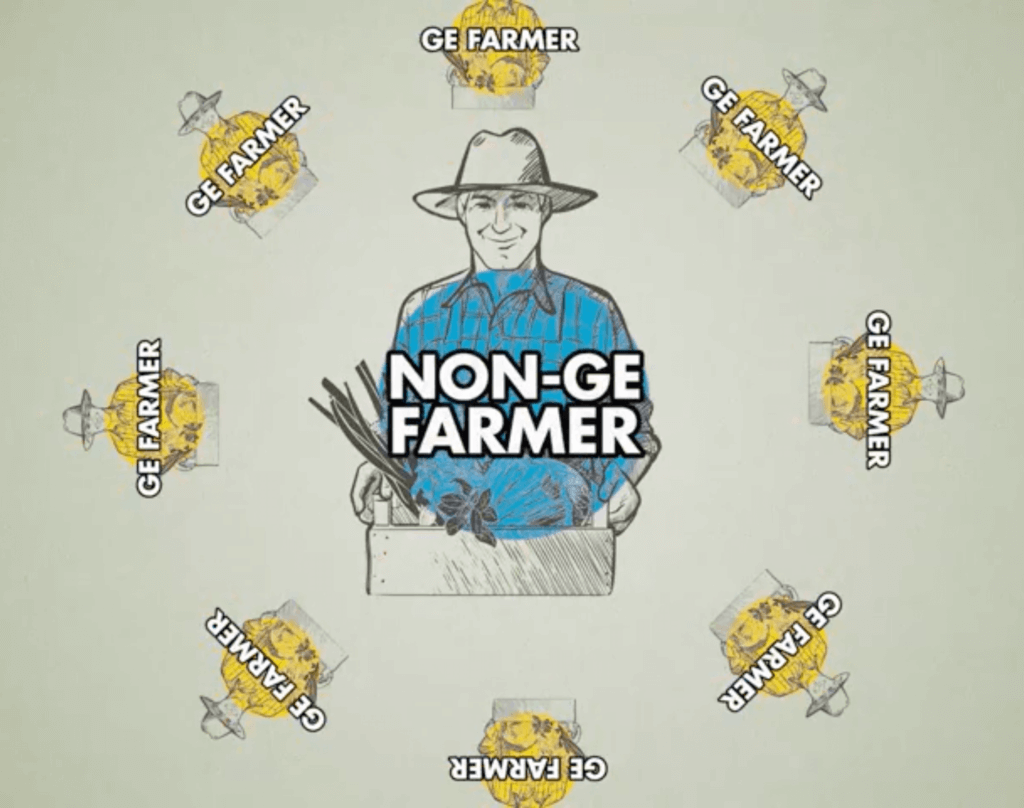 In other words, the “Halo Effect” from Bt corn adoption reduces the numbers of a major pest throughout the mid-Atlantic region, decreasing the need for pest control by other vegetable growers including the organic farmers who are prohibited from knowingly planting “GM” seeds!  So, the organic marketers who have staked their brands on vilifying safe and green competing products benefit directly from the wider use of the products they denigrate. Ironic.

As we have noted before, the United Nations Food and Agriculture Organization estimates global population will stabilize around 10 billion humans by 2050. Increased demand stemming from both population and economic growth means that between now and then farmers will have to produce as much food again as they have from the dawn of civilization to the present day. How can we avoid mass starvation in the future? Countless studies have shown that to do this with organic farming methods is simply impossible; the nitrogen needs alone would require perhaps twice as much land in cultivation as there is on the planet, leaving little for wilderness, biodiversity, or the “lungs of the world.” On the other hand, seeds improved through biotechnology have spared nearly 50 million acres/year from being converted to agriculture, reduced CO2 emissions by 59 billion pounds/year, reduced farmers’ pesticide use by 37 percent, increased yields by 22 percent, and cut the environmental impact of farming by more than 18 percent.

Some in the organic community see these things as they really are. Daily reports spotlight new ways in which biotech can be harnessed to produce novel biofuels, increase carbon sequestration, and further to improve agriculture and help it “tread more gently on the land.” Those interested in the facts of the matter can see the future, and it cannot arrive soon enough.

Val Giddings is Senior Fellow at the Information Technology and Innovation Foundation. He previously served as vice president for Food & Agriculture of the Biotechnology Industry Organization (BIO) and at the Congressional Office of Technology Assessment and as an expert consultant to the United Nations Environment Programme, the World Bank, USDA, USAID, and companies, organizations and governments around the world. Follow him on twitter @prometheusgreen.

This article originally appeared on the Information Technology and Innovation Foundation’s website as “How GMOs Can Save Civilization” and has been republished with permission.