Is the key to treating or preventing autism hiding in the gut microbiome?

This article or excerpt is included in the GLP’s daily curated selection of ideologically diverse news, opinion and analysis of biotechnology innovation.
What causes autism?

For the parents of 1 in 68 Americans who will be diagnosed with autism, this is a gut-wrenching question. And so far, there’s no satisfying answer, even as the rate of prevalence continues to rise (it’s increased 5 to 10 times in the past two decades).

The genetic basis of autism is complex, to say the least. As this 2010 study from the University of Utah showed, many children with autism may have their own “private mutations,” which are not shared with other autism patients and are not inherited but likely contributed in some way to their autism. This just added another layer to the more than 100 genes that are already commonly linked to autism. 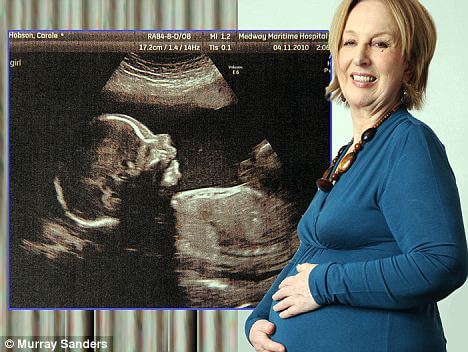 Many environmental factors have also been implicated as potential causes of autism. The National Institutes of Health (NIH) list advanced parental age at the time of conception, maternal obesity or diabetes, and extreme prematurity and very low birth weight among the potential non-genetic causes of autism. But each factor only raises a child’s risk a certain degree. Anomalies exist. Many older parents have non-autistic children and many younger couples have autistic children.

The long-since debunked study by Andrew Wakefield made the (false and fraudulent) connection between mercury in MMR shots and autism. Even though it was retracted and Wakefield discredited, and subsequent studies have shown no connection between any vaccine and autism, the fears his fabricated research generated are still promoted by many anti-vaccine activists.

There is also a belief that, at least as regards the rise in autism recently, that may be an artifact of changing medical language. A study by researchers at Penn State found that between 2000 and 2010, as the diagnosis ‘intellectual disability’ decreased, autism diagnoses increased at about the same rate. Another study by public health researchers at the University of Aarhus, Denmark, suggested that much of the increase in autism is due to changes in how the disease is diagnosed (at least in Denmark). They concluded that 60% of the increase in autism diagnoses between 1980 and 1991 was due to reporting practices—but even the Danish team points out that at least 40% of that increase wasn’t. 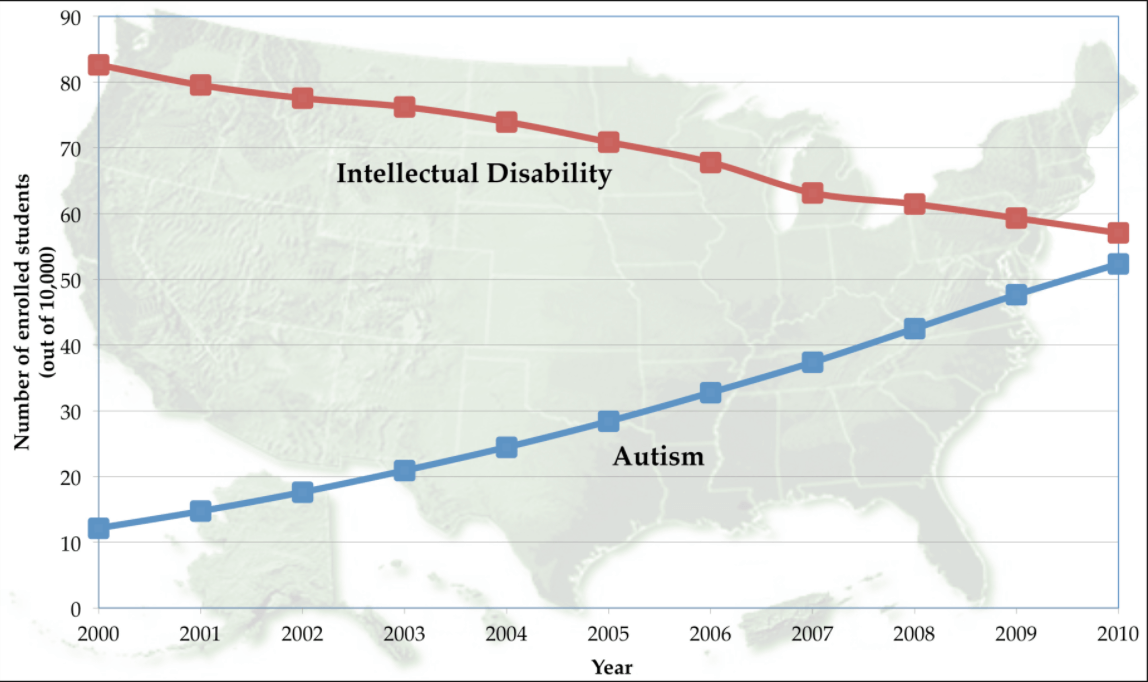 Which brings us back to the question, what causes autism?

How your gut talks to your brain

Numerous researchers are starting to focus their research on the immune system. They are looking at the role of the gut microbiomes—the billions of bacteria, fungi and other microbes that populate our intestines. The microbiome in humans is created shortly after birth—fetuses grow in a sterile environment and vaginal births help contribute to the creation of the microbial environments for the first time in a newborn human’s intestines.

The human microbiome is home to just a few bacterial groups. Just two, Firmicutes and Baceroidetes, represent 90 percent of the population. But the human population has thousands of species of bacteria, and the average person has about 160 species. And these can change quickly over time or due to environmental or individual change.

Studies also have connected the brain and the microbiome through what’s becoming known as the “gut-brain-axis.” Certain proteins, immune signals and neurotransmitters can move from the brain into the gut, impacting the activity and makeup of the microbiome. At the same time, the opposite happens: messenger molecules make their way from the gut and across the blood-brain barrier and influence brain activity. It is here that stresses and neurological disorders like autism could be linked to to gut bacteria. 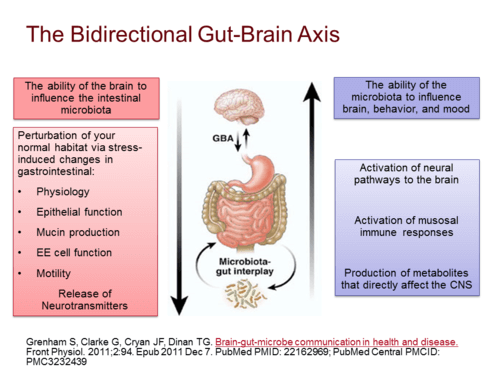 But the reaction may be overdone. A number of organizations are recommending that “getting your children good and dirty” will help stave off autism. Brett Finlay, a microbiologist at the University of British Columbia and Marie-Claire Arrieta, a researcher at the University of C 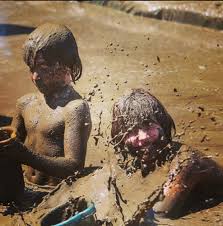 algary, have published several studies (and a book) showing that infants with four specific types of microbes in their feces were less likely to get asthma. Finlay and Arrieta pointed to a number of other diseases, such as allergies and autism, that may be linked to the “use of antibiotics in early childhood. Never before have babies and children grown up so cleanly, and our diets have lost many of the elements most crucial to the health of our guts.” Some of these issues have arisen from moving diets away from high-protein, high-fiber foods like lentils, beans and peas, but also from antibiotics. Finlay and Arrieta:

With the scientific information now available, parents can make informed choices about helping their children to develop a thriving microbiota. We are still years away from learning the whole story of how microbes contribute to our physical well-being, but what we know today is pretty convincing evidence that they are crucial, especially early in life.

So, what has this microbiota research shown us? Do we really know enough about our microbiome to prevent—or cure—autism? And just because the microbiota are mostly bacteria, does that mean that getting dirty affects our guts and our brains?

If the immune system had been created by a single human being and the data presented at a conference, it would be considered a work of genius. It is a dizzying complex of defenses, exploiting just about every part of the body that comes into contact with the environment (and a few, like the central nervous system, that don’t). In addition, its reactions with the environment are precisely choreographed to reduce damage to us—unless something goes wrong.

A review paper in Nature showed that the immune connections between maternal pregnancy and autism have a huge range—gestational diabetes, maternal age, obesity, autoimmunity, a gene called MET that is connected to the nervous system, growth factors, and autism, and infection.

The interplay between our intestines, epidermis, blood, antibodies, cytokines and nerve cells is just being unraveled. What still remains to be seen is how these finding fit in with the genetic causes of autism.

A version of this story originally ran on the GLP in November 2016.