‘Clean meat’: How lab-grown foods can feed us in the future

For long enough, I have been fascinated with the idea of growing stuff in the lab whether it’s milk, egg whites, leather or meat. In 2013, when I heard about the success of a Dutch researcher, Mark Post, on growing a burger in the lab I was excited to imagine what more the future holds for us. Prof. Post is also CSO and co-founder of Mosa Meat, a Dutch company. The cost of their burger has dropped down to $11 already from a sharp $300,000 in 2013.

In my recent binge watching of the Netflix series, Crown I came closer to these words that seem to be insanely true today.

“Fifty years hence we shall escape the absurdity of growing a whole chicken in order to eat the breast or wing by growing these parts separately under a suitable medium.” Winston Churchill said it back in 1930’s.

And here we are after a few decades, with the lab-grown meat.

Recently, I had a chance to have a small interaction with Uma Valeti, CEO and co-founder of Memphis Meats. I was elated to meet him. And as we spoke about Memphis’ recent series of successes, he was delighted and enthusiastically said,

“We are expanding our team. There is a long way to go”

Lab-Grown Meat or Clean Meat is very different from fake meat. While it’s incredible that companies are making plant-based meat delicious and imitating the same texture as that of meat but let’s not confuse these two different proteins.

What is Clean meat?

“Clean meat” describes the environment where the meat is produced. It refers to the surroundings that don’t require doses of antibiotics and chemicals for keeping the meat free from bacterial contamination such as E.coli, salmonella. These strains are usually present in the conventional meat cuts.

Clean meat is grown in the lab as opposed to the meat produced in brutal animal factories that poses harm to our health as well as our environment.

Leveraging the tissue engineering techniques, the meat is grown by taking a small sample of animal cells that are replicated in a culture medium inside a bioreactor. The culture media or growth media is a mixture of sugars, minerals, amino acids and vitamins.

As consumers are getting aware of the consequences of the way the food supply chain works, they want their food to be healthier in the sense that it contains lesser chemicals and leaves a smaller environmental footprint.

Here’s how clean meat can help us…..

Eliminating the harm to animals

Besides animal abuse, the conventional animal farming is unsustainable and harmful for both the animal health as well as human health. Pandemics like swine flu, bird flu, mad cow disease are prevalent because of the conditions that exist in the Livestock farms. Clean meat companies grow muscle cells and fat cells inside a bioreactor eliminating animals to a huge extent from this equation.

Reducing the burden on our environment 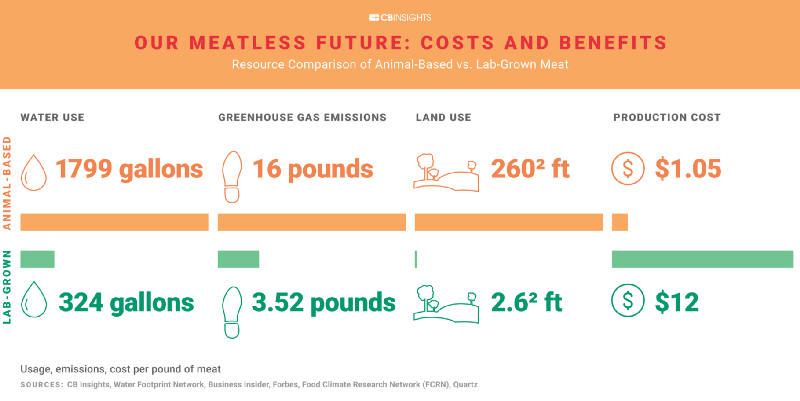 Addressing the challenges of growing population.. Do we have enough resources to feed 10 billion people by 2050?

Raising animals for food and other products requires to grow crops for their feed. If huge amounts of land are only growing grains for cattle, would we have sufficient crop growth for humans? By 2050, there would be 2 billion more meat-consuming people. Given the current situation, the land would disappear and we won’t have enough water to process meat.
Lab-grown meat offers an efficient alternative way of dealing with problem as it utilizes lesser space and doesn’t need fertile lands to grow grains for animals also.

Antibiotic resistance is one of the major challenges in front of us today around the globe. Livestock farms fail to follow the hygiene guidelines and are one of the major contributors towards this problem as the farm animals are force-fed with the same antibiotics as us making the bacterial strains resistant to existing doses. Companies growing meat in the labs do not require to give doses of hormones, antibiotics or chemicals to keep their meat safe from surrounding conditions. Growing meat would be as easy as brewing beer in a few years.

Since the first successful lab-grown meat in 2013 many companies have ventured into this area. Memphis Meats has successfully launched beef, duck, chicken and have some more amazing products lined up. SuperMeat, a company based in Israel promises vegans to have their share of real meat but not from animals. Some of the other companies like Future Meat Technologies says that the cost of a pound of meat could drop down to $2.5-$4.5 by 2020.

New Wave Foods have perfected the texture of lab-grown shrimps. These shrimps are plant-based. Essentially, made out of Red Algae. They are completely vegan and fish-free.

In 2017, Finless food produced their first clean-fish and the company is working on bringing sustainable seafood to our tables.

With the technology advancements, companies are eliminating the use of animal serum and other animal ingredients to make their products vegan-friendly yet full of flavour. These companies have their own secret ingredient to give meat the right kinda flavour.

A few decades ago this was science and today the leaders of these companies have translated that science into a reality.

We need renewable sources for producing our food. We no longer have easy access to acres of lands to grow crops neither do we have enough water to sustain livestock farming to meet the rising demand for meat and other animal-based products, sustainably and ethically. The clean meat factories would be like breweries making and selling meat instead.

Are you ready to join this movement in revolutionizing agriculture and farming for a better tomorrow?

Eshna Gogia works as a Business Developer at Helixworks Technologies, a Biotech startup based in Ireland. She actively blogs on Synthetic Biology and Biotechnology. Follow her on Twitter @eshna_gogia

This article was originally published at Medium as “Meating the needs of future” and has been republished here with permission.