This article or excerpt is included in the GLP’s daily curated selection of ideologically diverse news, opinion and analysis of biotechnology innovation.
Humans are unique in the degree to which they can manipulate their surroundings. And agriculture is one enormous way to do that manipulating — triggering fierce arguments over the impact on the planet. So, when an Oxford University study was published in Science looking at the sustainability of farming and ranching practices, it was heralded with curious reactions.

Poore’s study did indeed study GHGs, acidification, eutrophication, land and water use. But the paper does not conclude a recommendation of veganism. Instead, it calls for producers to monitor impacts, and find different ways to produce foods.

The study was a meta-analysis, a review of 570 studies of 38,700 farms and 1,600 processors, packagers and retailers. It found that agriculture has a massive impact on the planet—meat and dairy provide 18 percent of calories and 37 percent of protein, while using 83 percent of all farmland and generating 60 percent of agriculture’s greenhouse gas emissions. And it did look at the impacts on five environmental criteria according to production methods. But oddly, the paper’s conclusions—and the media pickup—focused on greenhouse gas emissions.

One method was grass-fed beef, introduced because it was considered more humane and ecological sustainable than other methods of feeding livestock.

And people who have long opposed eating meat picked up on the story. George Monbiot, a writer and environmental activist in the UK, tweeted that “the food campaigners meant well but got it wrong: switching from intensive meat to free range meat means less cruelty but even greater environmental destruction. The switch should be to a plant-based diet.” In a video, Monbiot expands on his case:

So, is all meat not only murder but murderous to the planet? Is veganism the only path to ecological sustainability?

Not so fast, according to UC Davis animal geneticist Alison Van Eenennaam. “Sustainability” will depend on what variable you are optimizing—is it greenhouse gas? Land use? Acidification? Cruelty? Productivity? They don’t always point in the same direction, she warned.

“The best solution is always a more efficient production system like the US,” Van Eenennaam said in an email interview with the Genetic Literacy Project. “And the use of technologies like implants and ionophores, which of course everyone freaks out about.” These technologies involve:

So far, technologies like genetic engineering have not yet been approved in cattle and nearly all livestock and may be unlikely to play a role given opposition from powerful non-governmental organizations.

A chart of productivity among different countries livestock from a “Dietitians’ Handout” by Van Eenennaam does point to a great deal of variability. Countries like the United States — and to a lesser degree, China — do show greater tonnage of meat from a given number of cattle. Others, like India, Ethiopia and Sudan, show dramatically less productivity. 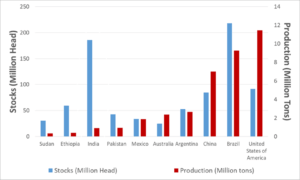 Another study, by Ray Hilborn of the University of Washington, and his colleagues, compared the environmental cost of animal foods in more detail and found wild, wide variations:

“There are striking differences in terms of the environmental impacts of different animal source food production methods,” Hilborn and his colleagues wrote. “Because the range of variability is quite high, any proposed policy must consider the specific species and production system.”

Another point Van Eenennaam makes is that removing cows from fields does not necessarily result in improved sustainability. Instead, it leaves a fallow field, full of plant matter that is inedible to us, that must be re-sown. Even some plants do not get off the hook. Asparagus, for example, consumes a dramatic amount of fossil fuels, and therefore emits far more carbon dioxide, because of requirements to transport the vegetable to markets.

Instead of veganism, looking at the best way to get a gram of protein might point to true sustainability. Protein—especially animal protein—is the easiest way for developing countries to raise living standards, by providing enough to eat more cheaply. However, a cow raised one way can be more sustainable than a cow raised another way. All food production involves tradeoffs; optimizing product quality and safety, improving animal welfare, and decreasing impact on the environment and using natural resources efficiency all require reducing one in favor of another.