[L]ook out into the future to the year 2050.  Do you think our future food conversations will be more or less divisive than they are today?  As much as I hope the opposite, I suspect that we’re likely to have more disagreement, not less, as we go forward.

Other’s have posited a similar phenomenon in the domain of food.  For example, see Ellyn Satter in this 2007 academic article where she lays out a hierarchy of food needs …. 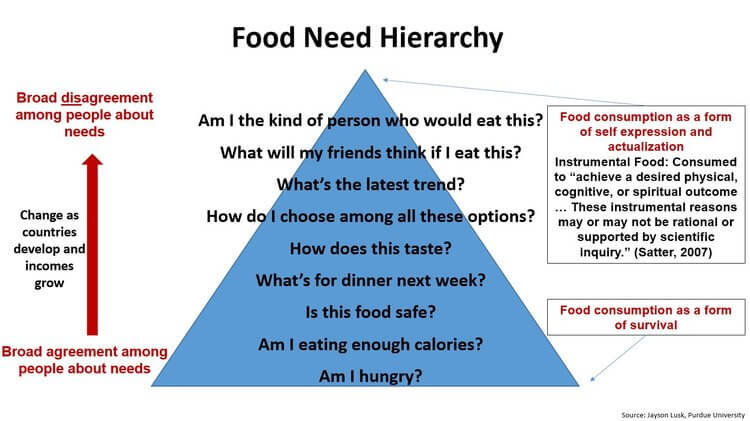 [W]hen people are highly income and resource constrained, people are asking questions like, “how do I get enough calories to eat?”  Once that question is answered, they can then [ask]: “Is this food safe?”  As a person (or country) develops and gains more income, they move from food being primarily consumed to survive to food consumption eventually serving as a form of self expression ….

[T]he Pew Foundation found that the widest gap between the general public and scientists was on the topic of the safety of GMOs.  Clearly, something other than peer-reviewed science is driving many people’s food beliefs and consumption patterns.

[P]sychology research shows that we …. think others are more like us than they actually are.  For those of us who have had the opportunity to “move up” the pyramid, we might forget the more foundational challenges many food consumers’ face.