The Food and Drug Administration recently approved the first drug based on RNA interference (RNAi). Unlike media darlings gene therapy and gene editing, RNAi silences genes. The first approval is a milestone two decades in the making.

The new drug, Onpattro (patisiran), treats the tingling, tickling, and burning sensations from the rare condition hereditary transthyretin-mediated amyloidosis, aka hATTR. About 3,000 people have it in the US. Alnylam Pharmaceuticals provides this “first-of-its-kind RNA interference (RNAi) therapeutic.” Like other new nucleic-acid based treatments, it’s pricey. The cost per year for the every-third-week intravenous infusion is $450,000. 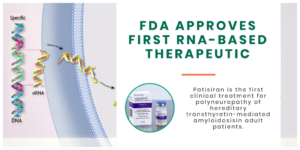 A Disease of amyloid deposition

The protein that is abnormal in hATTR is transthyretin, aka prealbumin. Made in the liver, transthyretin molecules normally gather into quartets that carry vitamin A. But when a person has a mutation in one of the two copies of the gene, the resulting differently-shaped versions of transthyretin can’t form quartets. Instead, they become spiky fibrils that collect as sheets that are deposited as a gummy mess, called amyloid, in various tissues — the GI tract, liver, heart, and peripheral nerves.

“Amyloid” may sound familiar because of its link to Alzheimer’s disease — it’s actually a general term that refers to 25+ types of proteins that become sticky if genetic changes disrupt their normal aggregation. Amyloids plug up vital structures. Build-up of amyloid-β peptide lies behind Alzheimer’s disease, islet amyloid polypeptide is in type 2 diabetes, and prion protein buildup causes mad cow disease. The first amyloid protein was discovered in poached egg whites in 1935.

The amyloid version of transthyretin in hATTR shortens lifespan, to 2 to 5 years after onset of neuropathy if the heart is involved, and up to 15 years if not. More than 120 mutations are known in the gene. Diagnosis requires genetic testing and liver biopsy to identify excess transthyretin.

This new drug may provide a more lasting effect than current treatment, which is liver transplant or drugs that keep the protein quartets together.

Two decades in the making

Andrew Fire and Craig Mello discovered and described RNAi in 1998, for which they received the Nobel Prize in Physiology or Medicine in 2006. Among an initial flurry of companies formed around the discovery and big pharma interest was Alnylam, founded in 2002. They stuck it out. But the long development time isn’t unusual. Two decades is a more typical timeline from discovery to regulatory approval for a drug than what’s been touted for CRISPR gene editing, first described in late 2011.

Gene silencing technologies target mRNAs, which are the go-betweens that carry a gene’s sequence information out of the nucleus and into the cytoplasm, where the encoded amino acids are strung together to form the corresponding proteins. FDA Commissioner Scott Gottlieb oversimplified when he dubbed the new treatment “targeting the root cause” of the disease, because RNAi isn’t a forever fix like gene therapy and gene editing can be. That’s why regular infusions of Onpattro are necessary — RNAs are short-lived intermediaries, compared to the permanence of genes.

Technical aside: RNAi follows a complex biochemical choreography. First an enzyme called Dicer cuts long RNA molecules into shorter ones that fold into hairpin shapes as some of its bases attract, A and U pairing and G and C pairing. Then a complex of proteins (called RISC, for “RNA-induced silencing complex”) recognizes and teases apart the hairpins and snips them down to 21 to 24 bases. These smaller pieces locate their complements among the mRNAs in the cell, bind them, and then a part of RISC called argonaute degrades the targeted RNA. Protein levels plunge.

The RNAi drug helps more than half of patients

Onpattro is a double-stranded siRNA with 21 bases on each side of the classic hairpin.

Related article:  Viewpoint: Consumer genetic testing plagued by inaccuracies that can be misleading, or even harmful

A multinational team reported phase 3 clinical trial results in the July 5, 2018 New England Journal of Medicine that led to the FDA approval. In the double-blinded study, 148 patients received the drug and 77 received placebo. When assessed for neuropathy 18 months later — motor strength, reflexes, sensation, nerve conduction and dizziness on standing — as well as walking ability, 56 percent of treated patients improved in polyneuropathy, mobility and quality of life, compared to 4 percent in the placebo group.

Onpattro targets a part of the gene that’s unchanged by any mutation, so it blocks production of both normal and abnormal transthyretin in liver cells —  patients make both because one copy of the gene is mutant and the other is not (the inheritance pattern is autosomal dominant). The clinical trial participants had 39 distinct mutations, but it didn’t matter because any mutation disrupts the aggregation, triggering amyloid formation. The specifics of the mutations aren’t as important as they are for a disease like cystic fibrosis, in which both copies of the gene are mutant and so no normal protein forms (the inheritance pattern is autosomal recessive). That’s why the drug Kalydeco treats only patients with certain CF mutations.

The hATTR community is thrilled. “For years I have witnessed the tragic impact of hATTR amyloidosis on generations of families. It’s extremely gratifying to see promising science translate into a treatment option that will allow patients to potentially experience an improvement in their disease and an improvement in their overall quality of life,” said Muriel Finkel, President of Amyloidosis Support Groups.

Although priced at $450,000 per year, the company will help by refunding insurance companies if the drug doesn’t work, as described in this Forbes article.

A second RNA-based drug is in development to treat hATTR, called Tegsedi. Phase 3 clinical trial results are published in the same issue of the NEJM as for Onpattro. Tegsedi hails from Ionis (formerly Isis) Pharmaceuticals’ affiliate Akcea Therapeutics and was approved in the European Union July 11. In late 2016 FDA approved a similar Ionis antisense drug, Spinraza, to treat spinal muscular atrophy.

Tegsedi uses another variation on gene silencing, a 25-base molecule similar to RNA but with a different chemical backbone. It’s an “antisense oligonucleotide.” (“Antisense” means a complementary nucleic acid sequence and “oligonucleotide” means a short DNA or RNA-like molecule.) The drug binds target mRNAs much in the way of RNAi, even using some of the same helper proteins.

In the Tegsedi clinical trial, 112 patients received the drug as a weekly injection under the skin and 60 received placebo, although only 139 participated until the end, 15 months later. Treated patients improved, but 16 had adverse effects (kidney problems and poor clotting) and five died, compared to none dying in the placebo group. Four of the deaths were due to disease progression and the fifth had a brain bleed following plummeting platelets.

Both new RNA-based drugs to treat hATTR lowered levels of the gummy protein in the blood. An editorial concludes that the investigations represent a landmark in treating this rare disease.

Nucleic-acid based treatments and interventions are still in their infancy. The first FDA approval came nearly a year ago, August 30, 2017, for Kymriah, created using chimeric antigen receptor T cell (CAR-T) technology. It delivers a novel dual DNA sequence that encodes bits of an antibody and a T cell receptor, acting like an armed drone veering to targeted cells.

Although hailed by some as a form of gene therapy, Kymriah treats a form of leukemia, not a classic genetic disease, for which gene therapy was initially envisioned. The first gene therapy approval for a single-gene disease, for a type of retinal blindness, was December 18, 2017. The first regulatory approvals for treatments using CRISPR are likely years out, although approaches using older gene editing techniques, like zinc finger proteins, may come sooner because they’ve been investigated for longer.

The bigger picture is that new ways of treating disease take time to nurture and optimize. Still, a decade or so from now, physicians will be able to choose from a new type of pharmacopeia borrowed from the ways that cells naturally control their protein production.