Recent genetic research suggests that Aboriginal Australians have lived on their island continent for at least 50,000 years (with some archaeological evidence pushing this back as far as 65,000 years). But what do such dates actually mean?

While we can readily grasp the half-dozen centuries or so separating us from the English king Richard III, whose remains were genetically identified in 2014, the incredible depth of the Aboriginals’ millennia-long connection to their land is almost inconceivable. Nonetheless, it is worthwhile to try and comprehend the vastness of time that indigenous Australians have resided in a single place. Not only can this provide a more profound understanding of what it is to be human, but it also allows – in this age of rising nationalism – a richer perspective on the very idea of national identity.

One way to appreciate the Aboriginal time scale is to imagine that each of the 52 weeks of a year represents 1,000 years. According to such a calendar, New Year’s Day would mark the point at which the first Aboriginals indisputably settled in Australia. The earliest European explorers, by contrast, arrived much later in the year – on the morning of December 28.This was followed by the major influx of new ‘Australians’ on December 30, only a day before year’s end.

Or, to capture this immensity of time another way, just hop across the Tasman Sea to Australia’s near neighbour, New Zealand (the last major landmass to be discovered by human beings). The sunken valleys of this country’s famed Fiordland – described by writer Rudyard Kipling as ‘the Eighth Wonder of the World’ – were carved by glaciers a mere 20,000 years ago.  That’s thirty millennia after the Aboriginals settled their present-day homeland. Here, we are talking of a human presence in Australia that can be measured in geological time.

How, then, does this compare with other peoples’ perceived place of origin or belonging? Staying in New Zealand, the indigenous Maori people’s powerful associations with their homeland are captured in their title tangata whenua (‘people of the land’). Yet on the year-long Aboriginal ‘calendar’ described above, the Maori likely arrived in New Zealand late on Christmas Day. 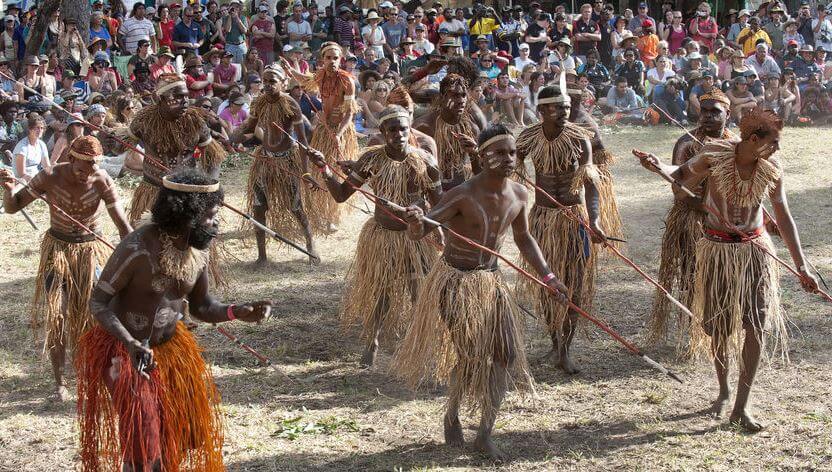 The ancestral origins of modern ‘English’ New Zealanders (and Australians), meanwhile, is even more recent, with the Anglo-Saxons settling in modern-day England around December 22 – roughly the same time that the Gaelic ‘Scots’ arrived, from Ireland, in the land that now bears their name. Further east, the intrusion of Germanic tribes into western Europe and the initial Slavic migrations into the Balkans occurred only ‘hours’ earlier. In terms of time, therefore, the ‘blood and soil’ ideologies of modern-day European nationalists are mere pinpricks compared with Aboriginal blood-ties to Australia.

Alternatively, we could turn our gaze to the future, to Europe and its inhabitants a thousand years from now (that is, a single ‘week’ on the Aboriginal time scale above). By then, the migrant crisis currently embroiling the continent will likely just linger as a faint genetic signature, the cursory DNA evidence that peoples from North Africa and the Middle East had migrated into Europe, just as countless others had done since Neanderthal times.

Indeed, on our imaginary year-long Aboriginal calendar, Neanderthals themselves were still the dominant human species in Europe well into April; with another branch of the hominin family – the newly discovered Denisovans – similarly flourishing in east Asia at this time. (Meanwhile, yet another hominin – the hobbit-sized H. floresiensis – was likely still living on the Indonesian island of Flores when the ancestors of the Aboriginals passed by, en-route to Australia.)

And it is here, with our hominin cousins, that modern genetic techniques are causing chaos to prevailing notions of human evolution and migration. In the past decade alone, for example, human interbreeding with both Neanderthals and Denisovans has been confirmed, with the latest breaking news being the discovery of a ‘hybrid’ human – a young girl with a Neanderthal mother and Denisovan father – amongst the fossils found in a Siberian cave. In contrast, then, to widely-accepted ‘replacement theories’ of a modern human exodus from Africa sweeping aside all existing archaic hominins, it now seems likely that we supplanted our near-relatives as much through mating as through competition.

One theoretical consequence of this new genetic understanding, therefore, involves re-defining the idea of a distinctly modern human race – after all, if our ancestors and Neanderthals and Denisovans could all interbreed, can we really talk about them as separate species? (And who knows what other early humans we may have mated with in those vast areas of the Earth as yet barely surveyed by geneticists and paleoarchaeologists?)

A more concrete consideration of our new found genetic knowledge, however, is whether different human groups in different places acquired different traits through interbreeding with any long-established human-like locals. This is possibly the case, for example, with the modern peoples of the Tibetan Plateau, whose ancestors may have inherited genetic adaptations for high altitude living from Denisovans, 40,000 years or so ago.

And this brings us back to the Aboriginal Australians themselves. They, too, seem to have acquired genes from the Denisovans (and, potentially, another as-yet mysterious hominin species) en-route to what is now Australia. At the time, it was still a single landmass, Sahul, including modern-day Papua New Guinea and Tasmania.

Interbreeding, founder effects, genetic drift and natural selection itself – all may have had a unique effect on the Aboriginal genome in the 50,000+ years since their ancestors first ventured forth from Africa. And here again, as with the people of Tibet and the Himalayas, recent genetic research reveals evidence of Aboriginals’ physical adaptation to the distinctive Australian environment (such as the temperature extremes of the central desert).

Yet if, over such vast distances of place and time, the interplay between biology and environment could have sculpted the human body in different ways, what about the human mind? Given the odious racism of the recent past, the very idea of possible cognitive differences between different peoples is something to be discussed with the utmost caution; yet, as biologist E.O. Wilson opined in his seminal On Human Nature (1978), “We are not compelled to believe in biological uniformity in order to affirm human freedom and dignity”. The question, then, still stands: Why should our brains be immune from the evolutionary processes that have so evidently affected our physical forms? And in the case of Aboriginals, surely it is not egregious to ask whether their 50 millennia connection to Australia has molded their very perception of the land? (Else, what does it even mean to claim a deep affinity for the land?)

The idea that different human beings perceive the world in different ways has – yet again – been bolstered by genetics; those ‘tetrachromat’ women who carry two different versions of genes for color perception on their X chromosomes, for instance, can see colors that are mere shades to those of us with more typical ‘trichromat’ vision. If nothing else, this example lends some support to the speculation with which aesthetician Denis Dutton concludes his evolutionary account of human creativity, The Art Instinct (2009) – that Aboriginal art shows a uniqueness of perception perhaps brought about by their long isolation in Australia.

And art, of course – like language and cuisine – is one of the most salient features distinguishing one human culture from another. Yet today, while the richness and sheer variety of human cultural practice is increasingly valued and respected, the same cannot be said about humanity’s seemingly equally rich and varied genetic inheritance. Perhaps, though, a greater appreciation of truly human stories like that of the Aboriginal Australians will, through time, bring about a change – one in which we can both marvel at and celebrate our species’ incredible cultural and genetic diversity.