Opposition to “high-yield” agriculture has taken many forms: Accusations of corporate takeover of the idealized family farm; preference for organic systems which don’t produce as much per acre but don’t allow certain pesticides and fertilizers; and of course, avoidance of genetic modifications such as pest-repelling Bt corn or glyphosate-resistant crops.

The assumption behind this opposition is that alternatives to high-yield farming are somehow better for the environment, reducing greenhouse gas emissions, soil erosion, as well as fertilizer inputs. Some activists, like Claire Kremen of the Berkeley Food Institute, even equate organic farming directly with biodiversity:

Increasing the proportion of agriculture that uses sustainable, organic methods of farming is not a choice, it’s a necessity. We simply can’t continue to produce food far into the future without taking care of our soils, water and biodiversity.

However, a new study published in Nature Sustainability turns that assumption on its ear—mostly.

Instead of what was expected—the higher the yield, the more impact from these five effects—the researchers found that a number of high-yield practices were quite positive, reducing greenhouse gases, water use, soil loss and nitrogen and phosphorus levels. But—and this was a very important “but”—these benefits only worked if the higher yields resulted in land being set aside for nature.

“Agriculture already covers around 40 percent of Earth’s ice- and desert-free land,” the authors wrote. “How we cope with very marked increases in demand for farm products will have profound consequences for the future of global biodiversity.”

But, the researchers also warned, “Pursuing promising high-yield systems is clearly not the same as encouraging business-as-usual industrial agriculture.” Using higher yields to extract greater profit from the same area of land will not help preserve biodiversity and natural areas, they said.

Other biologists, notably the renowned Edward O. Wilson of Harvard, have stated that in order to truly preserve planetary biodiversity, about half of the planet’s surface must be set aside for pure nature. To help get there, researchers cite two key needs:

Not a lot of numbers

One major finding the researchers made was that precious little data exists comparing yields with what they call “externalities” (greenhouse gases, water use, and other side effects of farming). In addition, many studies didn’t report levels of these effects completely enough to use and compare with other studies. So, sample sizes were far less than ideal. 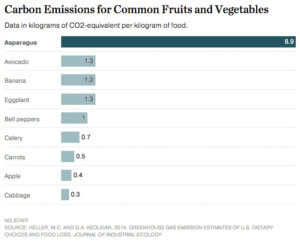 The research, while on the surface countering anti-GMO advocates and supporters of supposedly “natural” and organic farming techniques, is backed by other scientists’ work. Alison van Eenennaam, an animal geneticist at University of California, Davis, has long criticized studies for only weighing comparisons with greenhouse gases. The Nature Sustainability study also addressed gases and noted that the dearth of data forced a gas-only comparison in certain areas, like European dairy.

Van Eenennaam also has maintained that “sustainability” means making choices—compromises—among three pillars: animal welfare and “natural” environments, product safety, and decreased environmental impact. This study did not measure other variables, such as energy use or carbon dioxide production, which can come from transporting seemingly innocuous products like asparagus, which under current techniques creates a great deal of carbon dioxide.

So, what technique is the most sustainable of all? The answer is, it’ll depend. And yes, it is a lot about yield. Green and greed may not mix, but high-yield isn’t inherently evil if it results in less use of arable land and protecting existing forestry.

False security: Many schools and businesses rely on temperature tests but COVID often not linked to fever

Reports of COVID reinfection are becoming more common. How does that impact immunity?