The Guardian published an article by Sam Levin and Carey Gillam [on October 7] about the “new era of cancer lawsuits that threaten Monsanto.” To readers who know little about the subject, the article might appear to make a convincing case that glyphosate, the active ingredient in the widely-used herbicide Roundup, is a known cause of cancer.

After all, they describe four different cases of the rare cancer NHL (non-Hodgkin’s lymphoma) in people who used Roundup, either on a farm, on the grounds of a school district, or in their gardens, and they detail the suffering and death from the cancer. Further, they refer to the recent verdict of a San Francisco court against Monsanto (the maker of Roundup) and in favor of the plaintiff. Finally, they refer in passing to science indicting glyphosate and cite the opinion of the International Agency for Research on Cancer (IARC) that glyphosate is a “probable carcinogen.”

Levin is a writer for the Guardian based in San Francisco, and Gillam is the “research director” for US Right to Know, a not-for-profit food industry research group. [Read GLP profile of USRTK] She is the author a book entitled Whitewash: The Story of a Weed Killer, Cancer and the Corruption of Science. In reality, Gillam is an extreme anti-pesticide, anti-GMO activist, who shows no interest or ability in evaluating what is known about the science bearing on this question. She portrays herself as a champion of the victims who have been exposed to a known carcinogen due to the deceit of a greedy, all-powerful corporation. Although the authors do not make this point, we would also have to assume that regulatory agencies around the world must also be responsible (either due to incompetence or corruption) for the failure to recognize the dangers of glyphosate and regulate its use appropriately.

For someone who actually knows something about the relevant facts and context, the piece by Levin and Gillam trades on fear and ignorance to raise the specter of an epidemic of cancer caused by glyphosate and to cash in on the tsunami of litigation involving patients who believe that exposure to Roundup caused their cancer.

Here are some key facts that they leave out, and that convey a very different picture.

Roundup has been in use since the 1970s and is the most widely-used herbicide worldwide. It is popular with farmers because it is environmentally benign and has low toxicity. The acute toxicity of glyphosate is lower than that of table salt. Furthermore, over the past forty years, farmers and regulators have learned a great deal about pesticides and their optimal use. 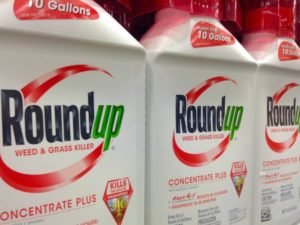 Both national and international health and regulatory agencies have evaluated glyphosate – in some cases repeatedly – and all but one (IARC) have found that the chemical does not cause cancer at the levels to which people are exposed in everyday life. These agencies include: the U.S. Environmental Protection Agency, the European Food Safety Authority, the Food and Agriculture Organization, Germany’s Federal Institute for Risk Assessment (BfR), Health Canada, Australia’s Pesticides and Veterinary Medicines Authority, and others.

IARC is an outlier among health/regulatory agencies. In March 2015, IARC concluded that glyphosate was a “probable carcinogen.” But, unlike the agencies mentioned above, IARC assesses “hazard,” rather than “risk.” Hazard refers to the possibility that an exposure might cause cancer under some possible condition, but ignores the degree of exposure in real-world situations. Furthermore, IARC made its determination based on the animal studies. However, most studies in rats and mice showed no evidence of carcinogenicity. IARC had to cherry-pick the results from two mouse studies in order to make its tortured case that the animal evidence supported a conclusion of carcinogenicity.

Importantly, it has come to light that the individual who urged IARC to assess glyphosate, the American statistician Chris Portier, became a litigation consultant to a law firm engaged in two lawsuits against Monsanto within several weeks following the IARC decision. This is just the tip of the iceberg. Tort litigation firms are flocking to take advantage of the huge bonanza from thousands of tort cases involving claims against Monsanto and Bayer, which recently acquired Monsanto.

Related article:  Cause for concern over claims of "dangerous" glyphosate in wine, breast milk, cereal, etc.?

Currently there are 8,700 cases and the number is certain to grow. And some scientists are only too willing to point to blips in the data that seem to indicate a risk, while ignoring the totality of the evidence and what are, by far, the strongest studies (see below). In this modern-day “gold rush,” the near unanimity of a large number of independent regulatory agencies that have found glyphosate to be safe should be taken seriously.

Finally, we now have the results of a large, well-executed prospective study of over 54,000 pesticide applicators in the U.S. conducted by the National Cancer Institute. Eighty-two percent of applicators used glyphosate. Participants were followed for nearly two decades, and over this period 5,779 cancers developed. Use of glyphosate was not linked to NHL, other lymphoid cancers, or any other type of cancer. Due to the size of this study and its careful methods, these results are by far the most informative about the risks of glyphosate. (These results were not published at the time of the IARC review.)

The high-stakes and highly emotional controversy surrounding glyphosate is emblematic of a more general phenomenon. Our life in advanced societies has become so safe that people are outraged at any hint of a theoretical risk. We have lost the ability to distinguish between substantial, known threats to our welfare (such as smoking, heavy alcohol intake, excessive sun exposure, and obesity) and much less certain and possibly trivial risks. In fact, due to a bizarre psychology, it is the latter category that gets by far the most attention. These theoretical risks get trumpeted by activists with their own powerful agendas (anti-pesticide, anti-GMO, pro-organic) and the media and become the stakes in high-profile court cases. Other examples involve cell phones, talc, BPA, and even coffee.

We seem to have forgotten that life inevitably involves risk. We need to begin to make basic distinctions and to pay attention to the degree of risk involved. Air travel involves a risk, but it has been reduced to a near-infinitesimal risk. Compared to air travel, driving a car involves a substantially higher risk. Nevertheless, most people willingly accept this level of risk in order to obtain the benefits of mobility.

Postscript: The Guardian did not respond to an email from me urging them to publish a corrective to the Levin-Gillam article.

Geoffrey Kabat, Ph.D., is a cancer epidemiologist and the author, most recently, of Getting Risk Right: Understanding the Science of Elusive Health Risks. Follow me at @GeoKabat

This article was originally published at Forbes as The Guardian’s Scare Piece On Glyphosate And Cancer Is Designed To Fuel A Tsunami of Lawsuits and has been republished here with permission.