This article or excerpt is included in the GLP’s daily curated selection of ideologically diverse news, opinion and analysis of biotechnology innovation.
Brazilians love their beef. Actually, they love our beef. US raised Angus beef is better marbled and more tender than the local Nelore beef, so it sells for a premium. Angus beef sells for about 50 percent more in Brazil than cuts from the native Nelore herds. Brazilian ranchers would love to charge that premium as well, but Angus cattle don’t thrive in the Brazilian heat. They slow down and stop eating enough to gain weight.

In the US, Angus beef put on weight and are ready for market much faster than Nelore in Brazil, leaving a much smaller land and greenhouse gas footprint. 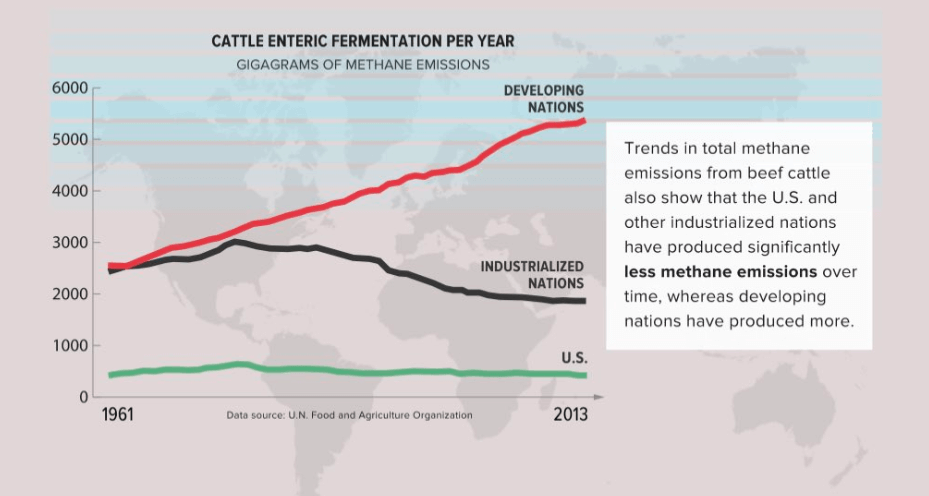 The Nelore cattle breed was brought to Brazil from India in the 1950’s. The cattle are distinguished by large hump over the top of the shoulder and neck and long legs which help them to walk in water and when grazing. The Nelore adapt well to all except very cold climates. In Brazil they are were prized for their tolerance to high temperatures and natural resistance to various parasites and diseases. They account for 80% of the national cattle herd.

Per capita consumption of beef and veal in Brazil was 38 kg in 2017. That compares to 26 kg per capita for the US. As incomes in Brazil have risen, the lower efficiency of Nelore beef is putting greater pressure on the food system and the environment, leading to deforestation of the rain forest. Seventy percent of formerly forested land in the Amazon, and 91 percent of land deforested since 1970, is used for livestock pasture [PDF].

Research in 2014 found Brazil to be the world’s largest exporter of meat related emissions impact, with beef accounting for triple the amount coming from poultry exports. Brazil maintains a cattle herd more than twice as large as the US cattle herd, but they produce slightly less beef than the US does. It would be a boon for Brazilian ranchers and the environment if Angus cattle thrived in Brazil.

Enter the biotech company Recombinetics which specializes in breeding cattle through gene-editing techniques. They are better known for the hornless gene edited dairy cows they have in development, but in terms of environmental impact, the heat-tolerant Angus cow that was cloned earlier this year in Brazil could be a much bigger deal.

When Tad Sonstegard, the chief scientific officer, was at the USDA, they were looking at Senepol cattle – a Caribbean breed, to discover the keys to heat tolerance in cattle. In 2008, through genomics and resequencing, they discovered the chromosomal location and a one base pair difference in the prolactin receptor gene. Known as the “Slick Gene”, that is largely responsible for heat tolerance. It produces shorter, slicker hair as well as other metabolic change. Studies have shown that slick-haired animals have internal temperatures about 1° F. lower during the summer months than other cattle with normal hair coats.

At Recombinetics, using the TALENS gene-editing tool, they duplicated the gene by a single base pair in a cell-line for a Red Angus cow in Minnesota. Then cells from that animal were frozen and taken down to Brazil where they were cloned. The cloned Red Angus calf, know as Genzel, was featured in the Wall Street Journal’s excellent Moving Upstream mini-documentary series. Reports are that Genzel is healthy and the new trait is working as expected.

Luciana Regitano of the Brazilian Agricultural Research Corporation is coming at the problem from the opposite direction. Last year her team identified regions of the Nelore genome that control muscle quality, hoping to find openings to improve tenderness and marbling in local Nelore cattle. Specifically, they looked at co-gene expression networks associated with the ribeye and backfat areas and the MiRNA associated with regulating beef tenderness.  To do this, they sequenced all the messenger RNA and muscle miRNAs of 200 animals, of which they already had information on meat quality.

The potential for gene editing to facilitate major breeding breakthroughs in animals is mammoth. Speaking to the Washington Post, Charles Long, a biologist at Texas A&M University said, “The technology challenges of producing genetically engineered animals are gone. What we have to do is really start producing the animals that have these traits.” Long works with various livestock animals to improve disease resistance. He has grown discouraged with the regulatory morass for livestock breeding in the US and now plans to move some of his work to Brazil, seeing a more favorable regulatory environment there. “I’m angry as hell 90 percent of the time. It’s been a 20-year fight.”

What remains to be seen is whether Brazil will treat Genzel’s breeding innovation as genetic engineering or in the company’s parlance, as a product of precision breeding. According to Fernando Flores, Assistant Director of Research for the Brazilian government’s agricultural research division, the outlook in Brazil for gene-edited meat is good.