This article or excerpt is included in the GLP’s daily curated selection of ideologically diverse news, opinion and analysis of biotechnology innovation.
Nigeria’s recent decision to sanction the growing of genetically engineered Bt cotton and Bt cowpeas could prove to be a watershed moment for the adoption of biotech breeding innovations across Africa.

The nation has the largest economy in Africa and is the most populous nation on the continent. So, its decision in this arena is almost certain to influence the actions of other African nations. In addition, Nigeria’s borders are notoriously porous, making it likely that its commercialized GM seeds will be smuggled to the neighboring countries of Niger, Cameroon, Benin and Chad. All four of these countries grow cotton.

[Editor’s note: This is part three of a series on the potential benefits of genetic engineering technology for Africa. Part one looks at climate change. Part two examines the fight against malnutrition. Part four explores the fight against pests and disease.]

Nigeria’s adoption of GM crops could encourage other African governments to stand up to the vocal anti-GMO forces that make unsubstantial and unscientific allegations about the supposed dangers posed by GMOs to human and animal health and the environment.

The African Center for Biodiversity (ACB) and the Alliance for Food Sovereignty in Africa (AFSA) are among the most vocal opponents of GMOs on the continent. According to the ACB website, it works “in civil society networks in Africa and globally to resist the pressures being placed on Africa to adopt commercial GM crops, and more recently second generation GM technologies.” The AFSA adamantly opposes the introduction of GMOs in Africa.  AFSA Secretary General Faustin Vuningima has said, the introduction of GMOs “should never be accepted.” 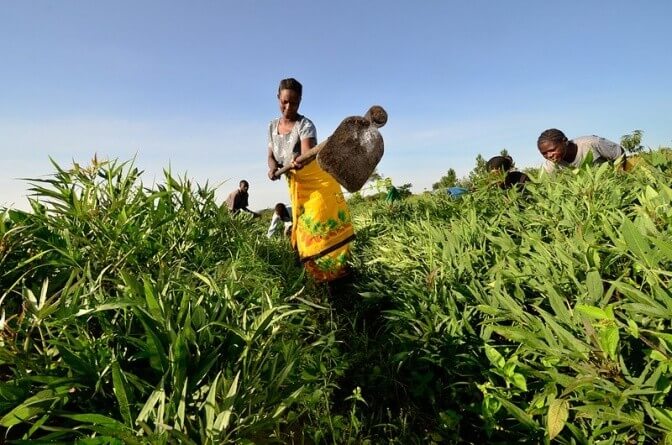 The scientific community in Africa though has long favored the introduction of GMOs as a means of boosting food production and improving the nutritional content of food. Among the notable supporters:

It appears that many African nations are increasingly listening to the scientific community rather than the vocal opponents of GMOs in the NGO community. Among the most recent encouraging developments that indicate Africa is more receptive to GM technology are the following:

Ethiopia, the second most populous African nation, approved Bt cotton in 2018.  The regulatory report that was released following two years of trials said: “GM cotton is safe for the environment and human health.”  Confined trials of Water Efficient GM corn are being conducted. And researchers are collaborating with the International Institute of Tropical Agriculture on a project using genetic engineering to develop varieties of enset (a banana) resistant to bacterial wilt disease.

Kenya is expected to sanction the commercialization of Bt cotton by 2020. The decision to grow Bt cotton follows successful trials by the National Environmental Management Authority. Dr. Charles Waturu, the Director of the Horticulture Research Institute, which conducted one of the trials noted, “Compared with the conventional cotton seeds that produce about 2,500 kg per acre, Bt cotton yields are double.”

It is hoped that Bt cotton will help to revive the morbid textile industry.  At present, Kenya produces about 20,000 bales of cotton a year (a bale weighs 184kg).  This is well below the demand of 140,000 bales.  The difference is met via imports.  Dr. Waturu believes that Bt cotton could potential boost cotton output to as much as 260,000 bales.

Ghana has completed field testing of Bt insect resistant cowpeas and commercialization could begin this year, if approved by the government. The field tested Bt cowpeas have demonstrated a high level of resistance to the maruca pod borer, which can destroy up to 80% of the crop.

Malawi has been field testing Bt cotton. In June, the lead scientist conducting the trials, Jessie Mvula, said, “We are evaluating the Bt cotton varieties across the country and so far so good in terms of preliminary findings…I can confirm that the gene is really efficient in controlling the bollworm.” Field trials began in December 2016 and if they prove successful, commercialization of GM cotton is expected by late 2019 or early 2020.

Uganda, which has one of the most extensive field testing of GM crops in Africa has approved a Bio-safety Law which should open the door to the commercialization of GM crops, if it can gain approval from the nation’s president. The bill was originally passed by parliament in October 2017 but President Yoweri Museveni declined to sign it citing a variety of concerns. In November 2018, a second measure – the Genetic Engineering Regulatory Bill – was passed to address many of those concerns.

Researchers, however, have expressed concerns over a liability provision of the law, which would make the owner of any patent legally responsible for any effects resulting from its creation and use. Dr. Andrew Kiggundu, a plant biotechnologist who started a laboratory to develop a GM banana, said the clauses regarding strict liability, labelling GMOs and the distances required between GM field tested crops and conventional crops to ensure there is no contamination of convention crops could inhibit research and development of GM crops and would also deter small farm owners from cultivating GM crops.

Clet Wandui, the Director of Tropical Institute of Development Innovations, criticized the clauses that would imprison anyone including farmers and scientists for any unintended adverse impact.

It is hoped that the new bill will finally allow the commercialization of many of the crops  already field tested. Among them are a vitamin A-enriched banana; a bacterial wilt resistant banana; cassava resistant to brown streak and mosaic diseases; potato resistant to late blight disease; nitrogen efficient rice; and soybeans resistant to leaf and stripe rust disease.

Rwanda in January 2018 took its first steps towards cultivation of GM crops when the Rwanda Environment Management Authority drafted a law governing GMOs. The objective of the draft bill was to ensure an “adequate level of protection in the field for the safe transfer, handling and use of GMOs.”  Dr. Patrick Karangwa, the Head of Research Department at the Rwanda Agriculture Board, said, “Rwanda is building capacities in research and biotechnology” to make the most of GMOs.

It seems likely that many African nations in the near-future will join the ranks of the countries that cultivate GM crops. Growing GM crops will help Africa feed its growing population and to boost agricultural production and farm income thus helping to spur economic growth.