Viewpoint: Anti-GMO forces in Nigeria have abandoned reason and the nation’s best interests

This article or excerpt is included in the GLP’s daily curated selection of ideologically diverse news, opinion and analysis of biotechnology innovation.
Anti-GMO forces in Nigeria are ratcheting up their opposition to the commercial release of the nation’s first two genetically engineered crops – versions of cotton and cowpea designed to resist a devastating pest.

The nation released the new cotton variety in the summer of 2018 and is in the final stages of releasing the new cowpea seeds to farmers. Breeders are hopeful these new GMO options will help farmers deal with yield-crippling insects like the cotton-hungry bollworm.

Cotton was once a driver of the nation’s textile industry. In the 1970s, it was Nigeria’s second largest employer with about 350,000 jobs. Today the sector is comatose because of low yields, caused by climate change and pests that have reduced yields by about 60 percent. Employment is around 20,000.

The GM cotton variety was developed using proteins from soil bacteria Bacillus thuringensis to confer resistance to the bollworm. This improved variety is projected to offer a significant yield increase over versions previously available to farmers.

Cowpea is an indigenous food crop and major source of protein to both rural and urban poor, Nigeria is the world’s largest world producer, but still experiences a consumption deficit of 0.5 percent. 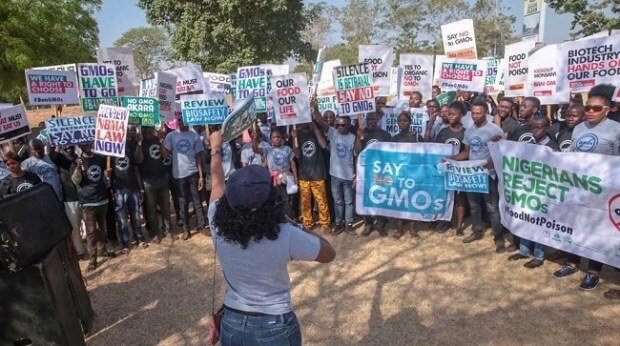 Nigerian researchers at the Institute of Agricultural Research developed a variety resistant to pod boring pests. They turned to genetic engineering after several years of unsuccessful research using traditional breeding methods. This new GM cowpea promises a 20 percent yield increase, while also reducing pesticide sprays from about eight times to two times in a planting season.

The two new seeds have taken different routes toward commercialization – the cowpea was developed by the nation’s own scientists – yet they have each been greeted by fierce opposition from anti-GMO forces.

Those opponents have formed coalitions led by the Health of Mother Earth Foundation (HOMEF). As GM crops head toward commercial release, the coalitions have called for the federal government to withdraw their permits. They’ve alleged a range of safety issues for human health and the environment, while also raising fears of western control of the African food economy.

They organize press conferences, training workshops supported by their local and international partners – mostly NGOs from Europe –  and street rallies. They have mobilized farmer groups and civil society organizations with no background in biotechnology, while building alliances with specific media organisations, and lobbying policy makers and those with links to government.

They’ve used messages based on fear and misinformation to discourage government officials and the public from adopting these new products. And they have used the courts to slow the process, with the ultimate goal of generating negative attention for the crops.

Among their leaders is Philip Njemanze (see GLP profile here), a physician and entrepreneur who opposes GMOs. He was arrested in 2016 for falsely accusing the Imo state Government of human organ trafficking. He also faces several credibility questions relating to his claims on GMOs, western alliance with African nations, and claims that Nigeria will cease to exist in 2014.

During the approval process for the GMO cowpea, he threatened to sue all promoters of GMOs in Nigeria. Later, he wrote an opinion piece arguing that the militant Islamic group Boko Haram is a puppet of biotech firms looking to gain control of Nigeria’s food supply.

Yet the actions of Njemanze and others have dampened the public’s enthusiasm for these new crop offerings. This has prompted other organizations to step forward to offer another viewpoint to consumers, farmers and policymakers.

The Catholic Medical Practitioners of Nigeria, for example, have applauded the ingenuity of Nigerian scientists responsible for the new cowpea.

A coalition of civil society organizations and farmers – led by Prof. Celestine Aguoro, a plant biotechnologist and president of the National Biotechnology and Biosafety Consortium (NBBC) – said in a press conference that activists are enemies of the country. They argue that opposition to new GMO crops risks opening the country to unregulated GMOs and chemicals, and that it will make farming unattractive and prevent Nigerians from their rights to food.

They called on the federal government to ignore calls by activists to ban GM cowpea because it is safe and poses no harm to humans or animals. Aguoro assured Nigerians that they followed various stages of the research and that there is nothing to worry about. They also encouraged government agencies to get activists involved in the process of developing GMOs.

The National Biotechnology Development Agency, remains committed to educating Nigerians on the technology and the products through the Open Forum on Agricultural Biotechnology (OFAB) unit, a knowledge sharing initiative of the African Agriculture Technology Foundation (AATF).

The forum has developed a network of stakeholders including scientists, political leaders, academia, religious groups, professional scientific associations, media and farmers. The goal is to explore and explain the real science behind the new crops and to educate Nigerians through the media. The effort has experienced some success, yet many Nigerians remain uneducated about the technology.

Responsible civil society organizations and groups work with the government for the common good of the masses. But many of these organizations have never taken the time to understand how various government agencies make their decisions, said Dr. Rufus Ebegba, director general of the National Biosafety Management Agency (NBMA). Such an approach raises questions about the true intent of critics and whether they have the nation’s interest at heart.

If they are truly worried about safety to human health and environment, and food security, then it should be done through constructive dialogue, education and objective assessment of risks, and not threats and smear campaigns. With such a rational approach we can bridge the divide and achieve lasting solutions to our common challenge of hunger, poverty and malnutrition.

Opuah Abeikwen is a co-initiator of Science Cafe Nigeria and a 2016 Cornell Alliance for Science Global Fellow. Follow him on Twitter @Opuahabeikwen