This article or excerpt is included in the GLP’s daily curated selection of ideologically diverse news, opinion and analysis of biotechnology innovation.
Social media in general, and Twitter in particular, is an absolute sewer pipe. While its role in sharing news is useful, the rumors and lies that it spreads, as well as the mob-like behavior that it encourages, has turned social media into a dangerous weapon.

In October 2015, I wrote an article for RealClearScience that detailed how activists were abusing the Freedom of Information Act (FOIA) by requesting that universities turn over private e-mail correspondence from professors. FOIA is meant to uncover wrongdoing by elected officials and bureaucrats, but activists use it to selectively extract quotes out of context in order to create controversy where none exists.

Nobody knows that better than plant geneticist Dr. Kevin Folta, who has had hundreds of pages of private e-mails published online for all to see (shockingly, by a group of anti-biotech activists who work for UCSF). For years, he has been viciously targeted in a coordinated cyberbullying campaign aimed at destroying him personally and professionally. His crime? He supports GMOs and once accepted money from Monsanto. Quelle horreur!

It doesn’t matter that Dr. Folta never acted illegally or unethically. The only thing that matters is Monsanto. In the minds of activists, Monsanto = bad, therefore anyone who has ever worked for, supported, received funding from, or merely said anything nice about the company is also bad. In the midst of the FOIA controversy, Nature Biotechnology wrote an editorial in support of Dr. Folta. Ominously, it warned:

“This is how demagogues and anti-science zealots succeed: they extract a high cost for free speech; they coerce the informed into silence; they create hostile environments that threaten vibrant rare species [i.e., gifted communicators] with extinction.

Things only got worse. Social media mobs continued to harass not only Dr. Folta but anyone who voiced support for biotechnology. Stephan Neidenbach is a middle school science teacher who runs a popular Facebook page called “We Love GMOs and Vaccines.” The activist mob disapproves, so they tried to get him fired. As I wrote at the time:

Their most recent tactic is to try to get Mr. Neidenbach fired from his school, so they have accused him of stealing from his students and mocking people with intellectual disabilities. Of course, neither of these are true, but that hardly matters… Then, the trolls took it to another level: They targeted his family.

Such abuse, by the way, is not limited to those who support biotechnology. Any researcher who publishes information with which activists disagree is ruthlessly targeted. Reuters details the story of Michael Sharpe, who has been harassed because of data he published on chronic fatigue syndrome that the patient-activist community disliked.

Believe it or not, things have gotten worse yet again.

Doxxing: The Newest Strategy To Destroy a Scientist

Having failed to destroy Dr. Folta professionally, the activist mob is now going after him personally in a particularly twisted away. Michael Balter, a journalist who was essentially fired by Science Magazine due to a “breakdown of trust,” just published incredibly private information about Kevin Folta, including Dr. Folta’s address and bank account information. (I refuse to link to the blog post. Dr. Folta confirmed in an e-mail to ACSH that Balter must have received hacked or stolen documents.)

Publishing someone’s private information is known as “doxxing,” and there is one and only one reason to do it: To encourage the mob to engage in intimidation, identity theft, violence, or worse. 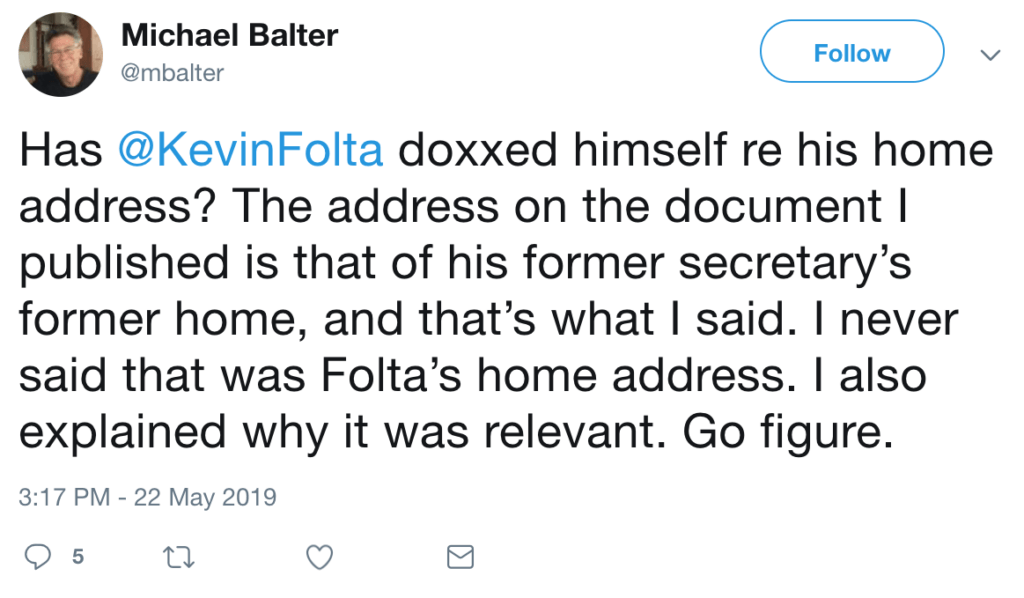 Balter’s justification for his actions is that the information is old and no longer used, but Dr. Folta denies this. Even if Balter is telling the truth, disclosing somebody’s personal data without their consent is outrageously unethical. Credit checks and other systems used to verify a person’s identity often use older private information, such as the addresses of former residences. And what if some deranged person shows up to that address? What Balter did was a gratuitous act of pure malice.

Related article:  Party drug 'ecstasy' could be the answer to years of searching for a PTSD treatment

Unsurprisingly, Dr. Folta announced that he intends to close his Twitter account. He says Twitter is not a safe place for scientists. Having personally received death threats on Twitter, I can verify that he is correct.

Update (May 23, 2019 @ 4:34 pm PT): Michael Balter was found to have violated Twitter’s rules. Yet, he’s still tweeting because apparently there are no consequences for bad behavior. 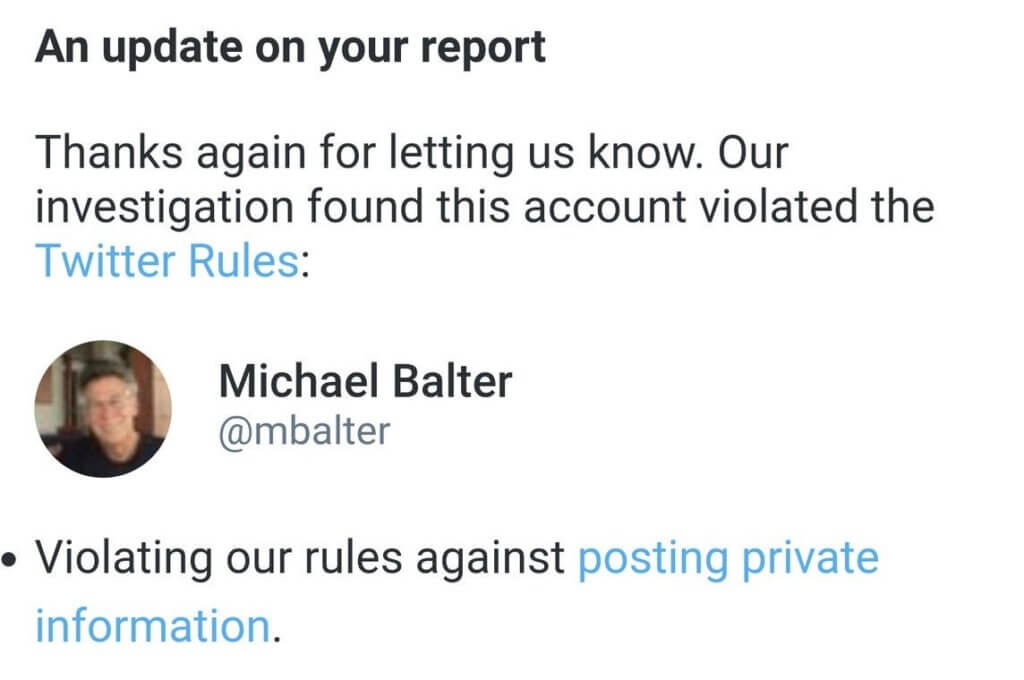 Alex Berezow is a microbiologist and Senior Fellow of Biomedical Science at the American Council on Science and Health. Follow him on Twitter @alexberezow

This article originally ran at the American Council on Science and Health as Doxxing: The Newest Strategy to Destroy Scientists and has been republished here with permission.