Education, politics, religion may have no impact on our acceptance of GMOs

This article or excerpt is included in the GLP’s daily curated selection of ideologically diverse news, opinion and analysis of biotechnology innovation.
Today, there’s a fierce debate about whether GMOs are safe to eat or a benefit to the environment. But this debate may not have permeated the US public (Europe’s another story) as much as other issues—so far. But how will the GMO debate evolve? Will it become a societal wedge issue like human evolution or climate change? Or will it evolve into something like the acceptance of genetics in healthcare, and the overall embrace of genetic editing to treat disease?

A study by two Carnegie Mellon University researchers, published in the Proceedings of the National Academy of Sciences, showed that public opinion of four issues — human evolution, the Big Bang theory of the university’s origin, research using stem cells, and climate change – varied according to conservative/liberal political leanings, and religion. Surprisingly, higher education levels  seemed to further galvanize people’s opinions towards these scientific and societal issues, which was antithetical to conventional wisdom suggesting that educated people are more likely to believe the science.

So, the researchers learned, political conservatives were more likely to reject consensus about climate change if they had more education, while educated liberals had more concern about the issue. Likewise, divisions of accepting stem cell research or human evolution were more dramatic among those who considered themselves very religious, and were more educated. 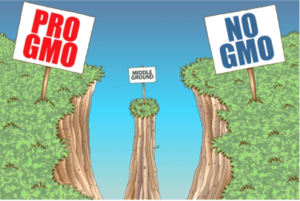 Equally surprising was the public reactions to GMOs. Here, unlike the other four issues, educational level, political leanings and religious beliefs had no bearing on public opinion of GMOs. Why would this be so?

One reason, said Caitlin Drummond, one of the study’s authors, is that the data used to analyze GMO attitudes was from a survey taken in 2006. This was well before the start of the energetic and well-funded fight by anti-GMO groups like Natural News, the Food Babe, or Joseph Mercola. Even groups like Greenpeace and Friends of the Earth had not organized their anti-GMO efforts in the US, although anti-genetic engineering sentiment in Europe was quite advanced (and this survey did not question Europeans).

The researchers showed that acceptance of GM foods tended to increase with scientific literacy (knowledge of techniques and the overall ways that scientists work and think), but did not vary much with either science education, or educational attainment in general.

Could the public attitude toward GMOs be intrinsically different than opinions about stem cells or climate change? Or, could the Carnegie Mellon team have come across the beginnings of a movement of thinking about GMOs, where we witness an evolution into entrenched thinking about genetics and food?

Related article:  'Drink like there is tomorrow': Inside the quest to prevent hangovers with a GMO probiotic

It’s certainly possible that attitudes toward GMOs have changed since 2006, and unfortunately we can’t observe that change with our data because the GMO items were only included on the 2006 General Social Survey. This brings up one of the important avenues for future research that is suggested by our paper: better understanding the processes that cause science to be caught up in larger social conflicts.

One issue here might be what’s called the “Dunning-Kruger” effect, in which a wealth of “data” and other sources of information create the false sense of expertise:

An ignorant mind is precisely not a spotless, empty vessel, but one that’s filled with the clutter of irrelevant or misleading life experiences, theories, facts, intuitions, strategies, algorithms, heuristics, metaphors, and hunches that regrettably have the look and feel of useful and accurate knowledge.

What’s curious is that, in many cases, incompetence does not leave people disoriented, perplexed, or cautious. Instead, the incompetent are often blessed with an inappropriate confidence, buoyed by something that feels to them like knowledge. 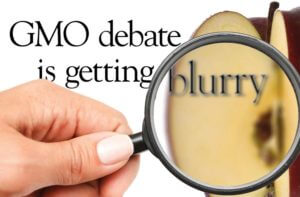 The paper also notes that what people think they know doesn’t necessarily jive with what they actually know.

“Perceived knowledge may not be related to actual knowledge,” Drummond and her collaborators wrote, noting that “imperfect judgement…involves miscalibration, whereby individuals’ confidence in their knowledge is only weakly correlated with its actual extent, emerging as overconfidence when knowledge is limited.”

This overconfidence isn’t limited to anti-GMO activists, or promoters of the technology. Scientists have committed this sin, too, including James Watson, known for the co-discovery of DNA’s structure but also famous for a variety of quotes, including a dramatic declaration nearly 20 years ago that a certain blood-vessel constricting anti-cancer technology “will cure cancer in two years.”

It remains to be seen how the differences over GMOs will evolve.

A version of this article previously ran on November 1, 2017.