Despite the endless stream of dramatic headlines and warnings from environmental activist groups, an overwhelming number of studies indicate that glyphosate, the active ingredient in Bayer’s herbicide Roundup, probably doesn’t cause cancer. This body of consensus science includes hundreds of independent papers and dozens of safety assessments conducted by 15 regulatory agencies worldwide. So comprehensive is this research, according to cancer epidemiologist Geoffrey Kabat, scientists are running out of ways to confirm the relative safety of glyphosate.

But several experiments conducted in recent years have challenged the mainstream view on Roundup safety, indicating that the controversial weed killer may increase your risk for certain cancers. A study published in July 2019 offers a typical example. The researchers exposed mutant lab mice to glyphosate for up to 72 weeks and reported at the end of their study:

These data support glyphosate as an environmental risk factor for [multiple myeloma] MM and potentially [non-Hodgkin’s Lymphoma] NHL and implicate a mechanism underlying the B cell-specificity of glyphosate-induced carcinogenesis observed epidemiologically.

The research was promoted by anti-GMO activists, including Gary Ruskin, co-founder of U.S. Right to Know. The organic industry-funded outfit has played a pivotal role in the ongoing glyphosate-cancer lawsuits against Bayer, supplying evidence to the plaintiffs and providing favorable PR for every case that goes to trial. 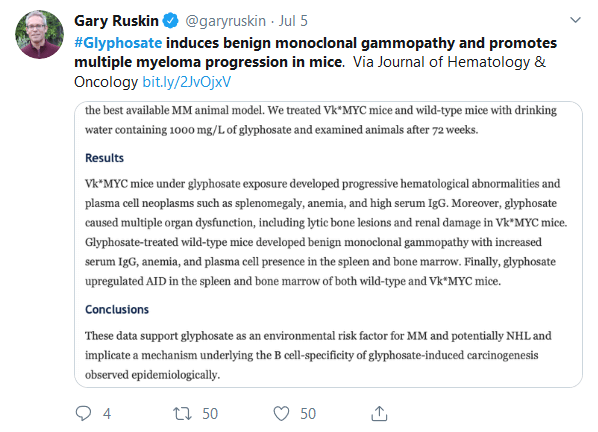 There was nothing inherently wrong with the research, but Ruskin failed to mention dozens of serious limitations in the study. For example, mice were given massive doses of glyphosate—enough weed killer to treat 31 square meters of farmland—for a year and a half. This is, needless to say, far more herbicide than any animal or human is actually exposed to in the real world. The study authors acknowledged this in their paper, noting that “an individual would unlikely consume such an excessive dose of glyphosate ….” They nonetheless concluded that “the [acceptable daily intake] for glyphosate should be reassessed ….”

But feeding mice enormous amounts of weed killer was just one of several important issues with this research that need to be addressed. University of Florida plant geneticist Kevin Folta joins GLP editor Cameron English to take a detailed look at the study. What did the researchers really find, and how should we interpret their results? Folta’s analysis underscores the importance of approaching news reports and scientific research skeptically, carefully examining the evidence before jumping to conclusions.