David Warmflash | November 15, 2019
This article or excerpt is included in the GLP’s daily curated selection of ideologically diverse news, opinion and analysis of biotechnology innovation.

Throughout human history, the military has lacked a reliable way to predict which soldiers could recover from the disturbing experiences of battle and which soldiers would likely suffer life-long emotional distress.

But our growing understanding of genetics may change this. Soon, with the confidence of an internist using cholesterol and triglyceride values to assess one’s cardiovascular risk, psychiatrists and psychologists may be able to screen soldiers to determine who might be more likely to cope with the stresses of a dangerous mission — and who might be better off behind a desk. At the same time, new insight on the molecular changes occurring in the brain as the symptoms of trauma manifest open the door to targeted drug treatments.

One of the things that makes assessment of risks to mental health so challenging is that social factors always come into play. But rapid advancement in our understanding of genetics in recent years has shed light on various markers affecting a range of psychiatric conditions, including post-traumatic stress disorder (PTSD). For decades, mental health researchers have known that tolerance for experiencing or witnessing potentially traumatic events varies greatly throughout the human population. What traumatizes one person for life may be just a minor, transient blip for somebody else. But only after such an event did one’s susceptibility reveal itself.

But comprehensive work by the Psychiatric Genomics Consortium published recently in the journal Molecular Psychiatry suggests that genetic factors account for as much as 30 percent of the PTSD risk. Social factors are still important, but we may soon reach a point where genetic testing can help the military — and other high-risk employers — figure out which soldiers would be at particularly high risk during battle, or in its aftermath.

That’s only part of the new good news, because neuroscience is also progressing on the matter of what changes in the brain as a result of trauma, and therefore how to mitigate the effects. An example of such progress is a recent study of the Department of Psychiatry at Yale University, the VA National Center for PTSD (NCPTSD), and the National PTSD Brain Bank. Using a technology called Positron emission tomography (PET) for a study published in the prestigious journal Proceedings of the National Academy of Science, this group of researchers has demonstrated a change in brain cells that could be easily exploited: over production of a certain protein, a subtype of what’s called the glutamate receptor. Like all proteins, this receptor is the product of a gene. What’s happening here is that some small part of the genome is switched to overdrive in PTSD, but since it’s a receptor its effects could be dampened by new drugs –drugs designed specifically to find that over-abundant receptor and stop it from doing what it usually does. As in many other mental disorders, the changes in PTSD come ultimately from the environment, but their effects come down to simple chemistry.

Along the way, we can expect that some discussions on gender will get a spotlight, because the genomic studies suggest that women have roughly double the genetic susceptibility of men for PTSD. This could make some people uncomfortable in the coming years, even though the implication of the research is that there is plenty of gender overlap. As with physical disease risk, sports injuries, or anything else, “double the risk” shows up at the population and tells you little about a particular individual. Thus, some women should be able to bounce back from a potentially traumatic better than some men.

Up to the early 1950s, the chronic trauma that we now call PTSD was though to be a purely military issue. This is because doctors had been noticing the problem in the context of battle scenarios going back to ancient times. Classic literature — from Homer to Shakespeare — offers hints that people have been aware of PTSD-like symptoms for man centuries. But serious efforts to document a specific condition began during military campaigns of the 18th and 19th centuries.

During the US Civil War, psychological trauma was often referred to as “soldier’s heart,” based on the premise that the psychological stress from battle affected mostly cardiac function. During World War I, physicians realized that the brain must be the focal point, and referred to it as “shell shock.” In World War II, the condition was called “combat stress reaction” or “battle fatigue.”

The first effort to broaden the terminology of psychological trauma to include non-battlefield triggers came in 1952 with publication of the first edition of the Diagnostic and Statistical Manual of Mental Disorders (DSM-I). In the DSM-I, it called it “Gross Stress Reaction”, a term that stuck through much of the Vietnam War period, but, as you might guess from the name, need not be applied only a soldier traumatized in battle.

The modern name, PTSD, was adopted in 1980. And while combat is still considered the most likely cause of the disorder, other contributing factors — Holocaust survivors and victims of rape and other violent crimes, for example — come into play, as well. 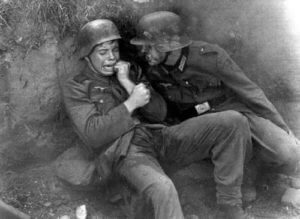 The disorder can take many forms, but generally it manifests as a reliving of traumatic events. This is built into the diagnostic criteria for the condition. Current clinical thinking is that even learning about an event, for instance the attacks of September 11, 2001, can be enough to trigger the condition. However, what really sets PTSD apart from other reactions to traumatic events is that it endures. Researchers now know that most people are susceptible to strong mental reactions to trauma, but that most people also recover easily. But some people appear to have more difficulty achieving a rebound, and there may be genetic reasons for that.

Risk for developing the disorder correlates with a kind of hyper-functional state in a part of the brain called the amygdala, which serves as a kind of alarm system for danger and also has a role in memory and emotions. Risk for the condition also correlates with reduced activity in the anterior cingulate cortex (ACC), which helps calm the amygdala and other emotional regions. This goes along with increased activity in the posterior cingulate gyrus (PCC) and an area of the parietal lobe called the precuneus.

There also are associations between PTSD and certain patterns of neurotransmitters. The glutamate receptor overproduction is one example. But, over the years, various small studies have hinted at genetic patterns underlying both the neurotransmitter patterns and the differences in the amygdala and ACC. They’ve also suggested links with other parts of the brain, including the hippocampus, which is important in memory formation. So the idea that genetics might play a role in PTSD is not new.

Writing in the Huffington Post, Torsten Klengel, an assistant neuroscientist at the Neurobiology of Fear Laboratory at McLean Hospital in Massachusetts, said genetics have long been considered part of the equation:

However, we still need to pinpoint which genes are involved, how they may interact to affect risk, and what are the exact molecular mechanisms behind this. Similarly, we also need to isolate genetic factors that may be responsible for increasing one’s resilience to trauma—which is why some individuals do not develop PTSD or other disorders despite considerable exposure to trauma.

In 2014, research with rats offered further support for the genetic connection argument. In the study, researchers at the Icahn School of Medicine at Mount Sinai scared male and female rats with the small of cat urine. According to The Atlantic:

Seven days later, the researchers separated those rats that were displaying PTSD-like symptoms from those that coped with the stressful event. An analysis of the gene expression in the animals showed suppressed glucocorticoid receptor signaling in their brain and blood of the PTSD-stricken rodents. 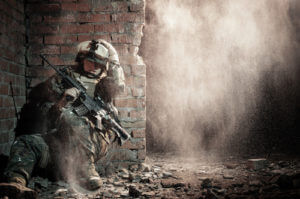 The researchers suggested that further analysis of gene expression by the individual rats could lead to the ability to screen — and potentially treat — individuals for PTSD.

In the most recent work, the report by the Psychiatric Genomics Consortium suggests that genetics can account for up to 30 percent of the risk of developing PTSD. The study examined data from more than 20,000 people participating in 11 multi-ethnic studies around the world. Said study author Laramie Duncan:

PTSD may be one of the most preventable of psychiatric disorders. There are interventions effective in preventing PTSD shortly after a person experiences a traumatic event. But they are too resource-intensive to give to everyone. Knowing more about people’s genetic risk for PTSD may help clinicians target interventions more effectively and it helps us understand the underlying biological mechanisms.

The study also found that among European American females, 29 percent of the PTSD risk is influenced by genetics. The genetic risk for men was substantially lower, the report said.

But what does this mean for the future of men and women in combat? Could we reach a point where the military uses genetic markers when screening soldiers for missions considered to be particularly risky in terms of physical or emotional trauma? The history of genetic testing for numerous other medical conditions, suggests that, if we wait long enough, the answer will be ‘yes’.

But for now, the researchers say more work is needed in the area:

If we can begin to understand the contribution of these factors to this complex disorder we will be better positioned to predict those who are most likely to develop PTSD following trauma, and thereby be better positioned to begin to implement preventative measures that may involve more targeted medications, or neurofeedback techniques including brain stimulation techniques such as transcranial direct current stimulation (tDCS), which may dampen the fear response circuit in the brain. Developing more personalized medicine will also address the heterogeneity of this disorder and lead to more effective treatments.

A version of this article first appeared on the GLP on September 11, 2017