Doing good science is hard. Effectively communicating that science to the public might be even harder. Nobody knows this better than Paul Offit. An accomplished academic researcher and pediatrician at the Children’s Hospital of Philadelphia, Offit has forged a second career for himself as an influential and capable spokesman for scientific thinking, probably best known for taking the anti-vaccine movement to task for spreading dangerous falsehoods about immunization. 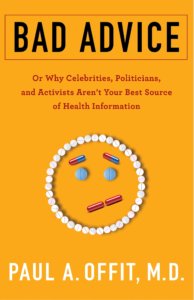 His 10 books,  countless op-eds and appearances on high-profile TV shows like the Colbert Report have earned him a lot of enemies in the “natural” health movement, who angrily refer to him as Paul “for profit” Offit. Interestingly, many of these critics (most notably Robert F. Kennedy, Jr.), have spun similar conspiracies about scientists who develop biotech crops, alleging they are shills for Monsanto. Researchers on the receiving end of such vitriol are typically targeted because they’ve stymied activist efforts to challenge the scientific consensus on vaccination, biotechnology, alternative medicine or some other controversial topic.

But Offit didn’t start out as a giant thorn in the side of the anti-vaccine movement. Over the course of many years and failed attempts to engage the public–sometimes on live radio and TV–the pediatrician honed his ability to distill dense medical research into five-minute sound bites that resonate with an audience of parents, many of whom have been badly misinformed about the risks of vaccines.

Related article:  Adults with autism are twice as likely to suffer from anxiety

On this episode of Biotech Facts and Fallacies, Offit joins GLP editor Cameron English to discuss his “hard-earned wisdom on the do’s and don’ts of battling misinformation,” important lessons he details in his most recent book Bad Advice Or Why Celebrities, Politicians, and Activists Aren’t Your Best Source of Health Information. Although public relations wasn’t initially a comfortable fit, Offit explains why he nonetheless stepped into the public square to take on celebrities, politicians and activists who peddle disinformation—and how others can learn from his experience.

Paul Offit is a pediatrician specializing in infectious diseases and the co-inventor of the rotavirus vaccine RotaTeq. Visit his website and follow him on Twitter @DrPaulOffit