This article or excerpt is included in the GLP’s daily curated selection of ideologically diverse news, opinion and analysis of biotechnology innovation.
The Laura and John Arnold Foundation was created by a hedge fund magnate to devote some of their Wall Street wealth to education reform, public pension reform, criminal justice reform, dietary policy, and improving reproducibility in science.

Those are all positive things, so why in 2018 did they also give money to one of the most corrupt, hate-filled, lying, mercenary organizations in America? U.S. Right To Know [GLP profile here] is an industry front group that exists to attack scientists and undermine public confidence in food and medicine for their donors, who unfailingly sell “alternatives” to the science and health consensus. They even launder dark money payments to outlets willing to help. More on that below.

Yet they just got $300,000 from a foundation that claims to care about the public.

Did Laura and John Arnold Foundation not see that the organization was founded by Organic Consumers Association, known allies of propaganda sites like Russia Today and an NGO which actively embraces the anti-vaccine movement? Did they not see that a key funder is Dr. Bronner’s Magic Soaps, which is not just a name, they literally think their organic soap has supernatural powers and are also an anti-vaccine group? How about Crossfit? You know, the exercise video company where the spokesman and right hand man of the CEO turned out to be an anti-LGBT hatemonger and whose CEO told diabetics that Coke caused their disease? That is a natural fit for deniers for hire like US Right To Know but should have been a red flag for the Laura and John Arnold Foundation. Instead, last year they gave USRTK the largest grant in its history.

Part of that may be because USRTK co-founder Gary Ruskin is simply a great salesman. There is no question he is better than me and I actually ran worldwide sales for successful companies. He convinced people he was the heir to Ralph Nader, the famed consumer advocate’s right-hand man, and though every piece of major legislation he’s lobbied for has failed he has gotten companies to hand him millions of dollars.

He even convinced University of California San Francisco to let him and his team manage an Industry Docs site, where taxpayer funding is used to attack taxpayer funded scientists and engage in politics—all in violation of federal law. It takes some real Svengali stuff to get a $1.5 billion university system to jeopardize its brand in order for you to make money.

Not everyone remains in love with him. The group that put him on the map, Organic Consumers Association [GLP profile here], seems to have had enough of the bad press associated with him and slashed his funding. 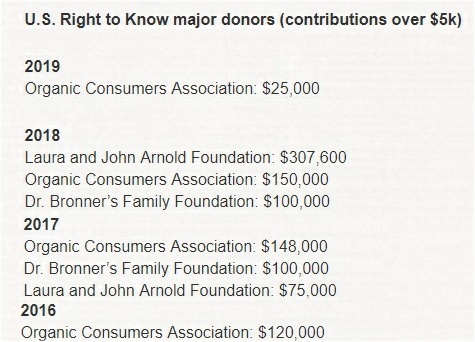 The bad press for USRTK staffers Gary Ruskin, Stacy Malkan, Carey Gillam and the army of Twitter bots US Right To Know uses is legion. While they once got a few gullible journalists–Eric Lipton at the New York Times, for example–to buy into their fuzzy-wuzzy consumer interest narrative, those mentions are getting harder to come by. They hired discredited former journalist Carey Gillam and gave her the title “research director” so they could show their donors deliverables by having her write in newspapers. That didn’t work out.

Journalism is a small community and Reuters’ concerns about her advocacy for anti-science groups were well-founded. Other outlets know that. She has occasionally convinced politically sympathetic editors in left-wing outlets like The Guardian in England to run op-eds but those are also under a cloud of suspicion because of dark money line items on US Right To Know tax forms that go to a journalism site in England. In the U.S. it’s just squeaky blogs on Alternet, Huffington Post and anti-Semitic sites like CounterPunch carrying their conspiracy theories.

As organic food became Big Food – $120 billion in sales this year – more organic farmers and companies have found they no longer need to build themselves up by tearing their neighbors in regular farming down. The industry voice is no longer dominated by rich white gardeners who oppose science in favor of Shamanism, it is now a diverse group of professional farmers who simply choose to adhere to a manufacturing process because it has higher profit margins, no different than a kosher food group does. The organic industry now has rules; it put in dozens and dozens of exemptions for non-organic additives because that increases their revenue, it has lobbyists and trade groups on panels inside the US Department of Agriculture.

Organic farmers aren’t limited to Whole Foods now, they have Kroger. There are farmers growing both conventional and organic food based on whichever provides the best economic return. It’s become mainstream capitalism, not a fringe lifestyle that needs to promote conspiracy stories.

Being mainstream means they no longer need to fund smear merchants like Organic Consumers Association, consumers are already buying their process in produce aisles. And there are other groups, such as Organic Trade Association, which do not carry baggage such as sponsoring meet and greets with anti-vax cuckoo bird Robert F. Kennedy the way OCA continues to do while kids in the northwest whose parents listened to organic trade groups about medicine suffer. 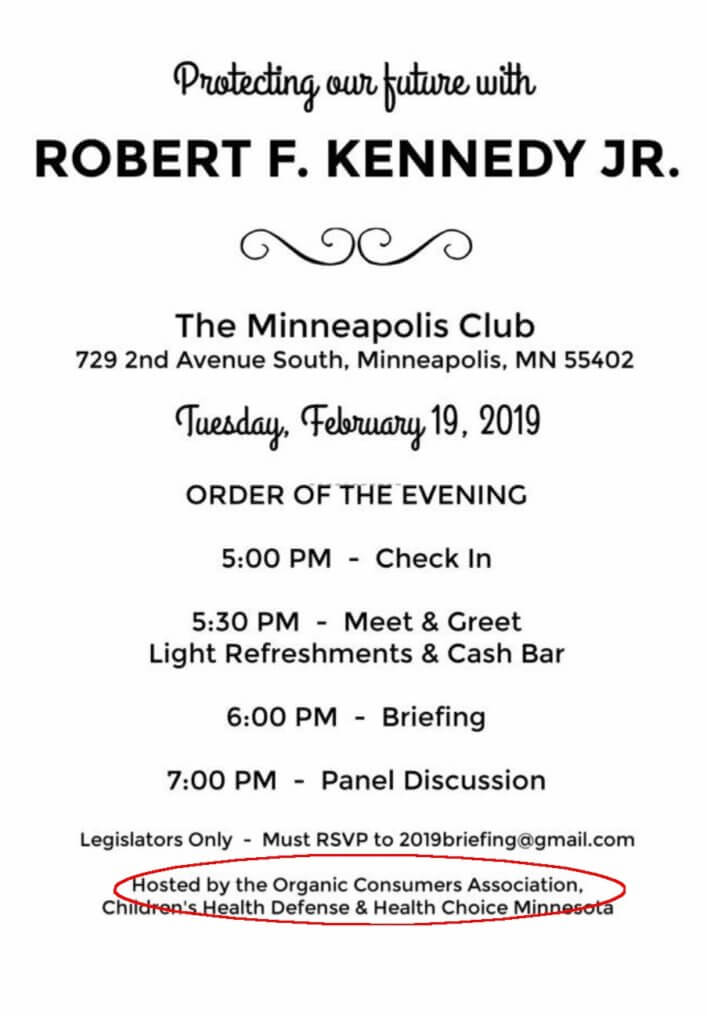 But to the mainstream science community, and apparently organic farmers, if 85% of the OCA donation is gone there is only $25,000 more to go.

I applaud that move. It is better to leave them to the magic soap crowd.

This article originally ran at Science 2.0 as Farmers Flee From Organic Consumers Association, Who Then Slash Funding To Their US Right To Know Subsidiary and has been republished here with permission.