Vandana Shiva is arguably the highest profile—and many say the most notorious—GMO critic in the world. She was once called by journalist and political commentator Bill Moyers the “rock star” of the crusade against crop biotechnology. Along with ample media attention and a massive public following, Shiva has attracted intense criticism from the scientific community for perpetuating long-debunked myths about agriculture, biotechnology and food safety.

Shiva is scheduled to speak in late January at Stanford University and the University of California, Santa Cruz on “equitable and sustainable” farming methods. Her positions on a variety of issues have irked and at times outraged scientists who consider her a disseminator of misinformation who profits at the rate of $40,000 a lecture (or more) to spread  propaganda critical of mainstream views of biotechnology.

Raised in prosperity, this Indian Brahmin was formally trained as a philosopher, embracing and promoting a form of Quantum Theory that is now widely dismissed. She often falsely claims that she is a trained physicist, and those false ‘scientific’ credentials are often echoed by her supporters. The GLP has carried numerous articles about her history of misstatements and fabrications (here, here, here). She was the subject of a scathing critique, “Seeds of Doubt,” by Michael Specter of The New Yorker, which documented her history of misleading claims and what Specter maintained often verged on anti-science gibberish.

For more than three decades, she has relentlessly campaigned against globalization, focusing on food and agriculture socio-economic issues and an opposition to GMOs, free trade and intellectual property rights. She alternately promotes land redistribution, indigenous and peasant farmers’ rights, organic-only food production and ayurvedic health practices over conventional medicines, all of which she characterizes as an “earth democracy” movement necessary to restore “harmony,” people and nature.

Shiva receives financial backing from high-profile activist groups such as the Center for Food Safety, which shares offices with her in Washington. Among her most controversial talking points is her false claim that there was no hunger in India prior to the Green Revolution. The truth is almost 180 degrees the opposite, as the Green Revolution, marked in part by the introduction of synthetic chemical fertilizers and pesticides enable massive increases in food production. A recent review of the evidence shows, “the production of cereal crops tripled during this period, with only a 30% increase in land area cultivated.” Shiva also blames the Green Revolution for increasing poverty, indebtedness and despair among farmers. Her notorious allegation that the introduction of insect-resistant GMO crops in India led many farmers to commit suicide has been evaluated and dismissed as inaccurate. Shiva is also a fierce opponent of so-called Golden Rice, a crop engineered to combat vitamin A deficiency in developing countries.

In response to the scheduling of her two talks at Stanford and UC Santa Cruz, 39 scientists from around the world co-authored an open letter to both universities protesting the invitations. The signatories told the GLP that their aim is to alert the events’ organizers, participants and attendees to the numerous falsehoods in Shiva’s philosophy. The letter, reproduced below in full, blasts Shiva for her “use of anti-scientific rhetoric to support unethical positions.” Neither university has scheduled a scientist to present the evidence-based case for crop biotechnology.

We are scholars of life sciences and social sciences who have published many scholarly papers and articles about agriculture, food and related biotechnologies.

Perhaps you are unaware of Dr. Vandana Shiva’s constant use of anti-scientific rhetoric to support unethical positions. We are very surprised that any science-based and ethically inspired institution would invite her to speak.

Here are some (only some) examples of her prejudicial, anti-science, anti-social stances:

1. Her astonishing tendency to nonsense. See the absurd statement regarding the supposed functioning of the Genetic Use Restriction technology (GURT), from her book Stolen Harvest (p. 82-83):

Molecular biologists are examining the risk of the Terminator function escaping the genome of the crops into which it has been intentionally incorporated, and moving into surrounding open-pollinated crops or wild, related plants in fields nearby. Given Nature’s incredible adaptability and the fact that the technology has never been tested on a large scale, the possibility that the Terminator may spread to surrounding food crops or to the natural environment MUST be taken seriously. The gradual spread of sterility in seeding plants would result in a global catastrophe that could eventually wipe out higher life forms, including humans, from the planet.

One may need to read these statements twice, because they are too bewildering to be understood at first sight. In fact, she claims that sterile seeds – which of course cannot germinate – can spread sterility. A middle school student expressing such views would fail the biology exam.

2. Her stunning ignorance: “Most #GMOs are #Bt toxin or #HT herbicide tolerant crops. Toxins are poisons. GMOs=Poison Producing Plants. Poisons have no place in food.” 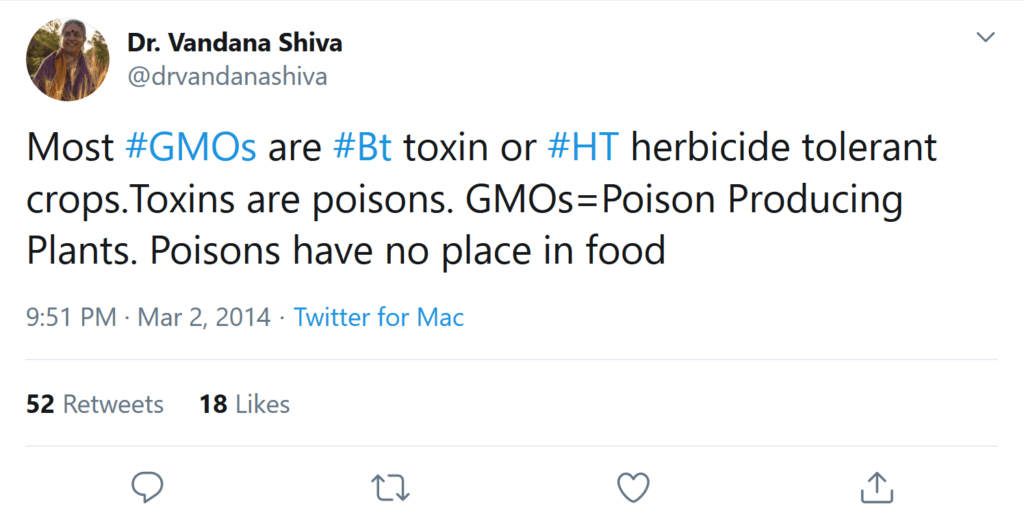 Somebody should explain to her that Bt proteins are toxic to some clearly identified classes of insects (plant pests), but not to fish, birds, mammals. See also the scientific papers quoted in response to her delusional post, in particular, a “classic” study which clarifies that plants naturally produce substances to defend themselves from pests and 99.99% of pesticidal substances in food are natural – and harmless to humans.

3. Her proclivity to offend: “Saying farmers should be free to grow GMOs which can contaminate organic farms is like saying rapists should have freedom to rape”. She is comparing farmers, who grow crops which are scientifically and legally recognized as safe, to rapists! It’s a grotesque insult to millions of honest workers who use modern technologies to farm sustainably and efficiently. Understandably, her outrageous abuse raised many angry reactions (see the replies to the same post). 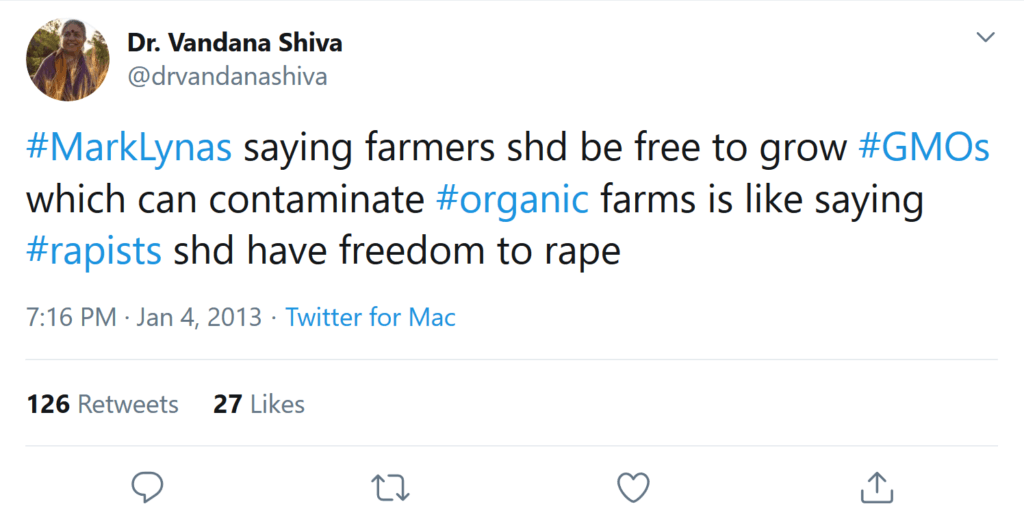 4. Her rejection of technologies which help farmers (mostly women and children) to alleviate the painful, back-breaking labor of hand-weeding: “Indian women selectively do weeding by hand, hereby preserving our biodiversity” (Photo and caption at p. 21.) This is a preposterous statement; any act of weeding is exactly aimed at eliminating detrimental plant “biodiversity” which, in a field, stifles crops.

5. As a final treat, a ridiculous statement: “Fertilizer should never have been allowed in agriculture,” she said in a 2011 speech. “I think it’s time to ban it. It’s a weapon of mass destruction. Its use is like war, because it came from war.” Let us ask her if she is going to ban metallurgy, since it has been used to forge cannons…

We are confident that our reasoned remarks will be seen by the addressees of this letter, by their colleagues and by students at UCSC as constructive criticism. We are afraid that none of us will be able to attend the event to challenge Dr. Shiva in person. We would appreciate if you can make our letter available to the participants.