Does organic mean ‘pesticide free’? 5 things to know about the USDA organic label

This article or excerpt is included in the GLP’s daily curated selection of ideologically diverse news, opinion and analysis of biotechnology innovation.
Why do we all have a different definition for organic foods? Is it really pesticide-free? Hormone-free? And if the label reads “natural”, is it also organic? We took a look at how the USDA monitors organic products and what the term really means.

Did you know that vitamin C doesn’t cure the common cold? And that Twinkies don’t last forever – they’re only fresh for around 25 days? And that gum doesn’t stay in your gut for 7 years – it passes through just like everything else? These myths have been proven false by credible institutions.

So, in this age of transparency and information, how can we still believe so many falsehoods?

There’s another big misconception in the food industry. And with two kids and a goal to prepare nutritious foods for us this holiday season, I decided to closely examine what it means when a food is labeled “organic”. Is it really worth splurging for that organic heritage turkey and finding herbs and vegetables locally grown on organic farms to prepare and season our dishes?

What I’ve found when asking what “organic” means to people is that it’s a very contentious term with very strong opinions. It means many different things to different people: pesticide-free, GMO-free, small local farms, nutrient-dense, richer soil…the list goes on.

For many, choosing organic foods is an emotional decision. Mintel reports that most of us purchasing “natural” or “organic” products don’t fully understand the nuances of these claims, but just feel better about buying them, for one reason or another. This leads to most of us purchasing these products for our family while not knowing precisely why, besides a broad feeling of moral obligation.

So, despite its perceived flexibility in definition, what makes a food officially “organic” in the U.S. is not as wholly-encompassing as many of us think it is.

So what does “organic” really mean, then?

In its simplest terms, organic foods must be produced while protecting natural resources, conserving biodiversity, and cultivated with no genetic engineering or ionizing radiation and with mostly natural pesticides and fertilizers.

For a food to be considered “organic”, it requires the approval of the United States Department of Agriculture’s Agriculture Marketing Service (AMS). The overarching purpose of the AMS is to create worldwide marketing opportunities for U.S. producers of food, fiber, and specialty crops while also ensuring the quality and availability of applicable food products.

In addition to the National Organic Program, the AMS oversees a variety of other programs affecting our food and ag system, including food quality protection, hemp production and country of origin labeling. With the U.S. organic industry under the scrutiny of the AMS, all such foods must be produced using their approved methods, whether it is grown in the U.S. or another country.

So now we understand that organic foods can’t be genetically engineered nor cultivated with popular synthetic pesticides, like Roundup. But what about other claims, like “pesticide-free”, “clean”, “locally-farmed”, “grass-fed”, and all those other terms that are tossed about when thinking of organic food? Let’s take a closer look. 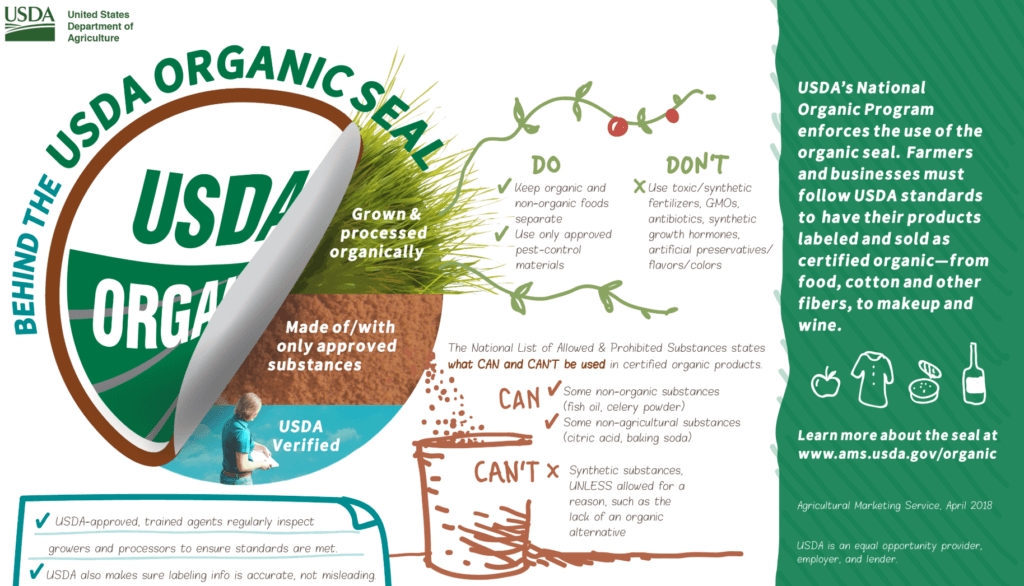 Organic food can have pesticides?

Contrary to popular belief, organic foods have pesticides, whether used directly on the crops or not. Organic foods can be treated with pesticides from the USDA’s approved substances list, which includes products like copper sulfate and hydrogen peroxide. Though organic farmers mostly use natural pesticides on their crops, there are synthetic pesticides approved for use on organic crops, as well. Also, the USDA reports that pesticide residues are found on both organic and conventional crops alike in its Pesticide Data Program, but all crops are held to regulations governing safe consumption levels.

Just as conventional farms have larger and smaller operations throughout the country, so do organic farms. In fact, many larger farms have both organic and conventional operations. Because of this flexibility, it is awesome that we can find both conventional AND organic raspberries on our grocery shelves in the dead of winter. An amazing feat!

Organic foods are also imported into the U.S. every day from countries all over the world. All farms exporting their organic products to the U.S. must also be organically certified according to the USDA organic regulations. Though not all organic products indicate their country of origin, the products must still comply with the U.S. National Organic program.

How about only grassfed and no drugs?

Contrary to popular belief, organic livestock can indeed be raised in a feedlot; purchasing organic meat does not guarantee grass-fed or grass-finished animals. However, the USDA organic seal on meats does mean a few other things that may be important to you.

For instance, organic livestock must be raised and must have year-round access to the outdoors. They must also be fed an all-organic diet (which can include organic grains), and may not be given antibiotics or hormones. However, they can receive vaccines for disease prevention and a handful of approved drugs, like pain and deworming medications.

It’s important to note that, for the U.S., hormones are prohibited for use on all chickens, turkeys, and pigs – whether organic or not. So if you’re buying your family organic chicken tenders only to avoid added hormones, save your money and buy conventional chicken! Furthermore, almost all dairy cows, both organic and conventional, don’t receive additional hormones, like rBST.

But at the least, aren’t organic foods better for us and the environment?

Many of us assume that organic foods are better for our bodies than their conventional counterparts. However, a consensus has not been formed by the scientific community on this hypothesis, as many studies have had inconsistent research parameters, such as too small of sample size to apply to a larger population.

Of particular note, several studies have shown that those eating organic foods more frequently are less likely to be overweight and have heart disease, but it turns out they were more likely to practice healthier diet and exercise choices, in general.

But you know what’s definitely better for all of us? Eating a fresh salad instead of a bowl of Annie’s organic and grass–fed mac & cheese! No offense to Annie’s – my kids are obsessed with their shells with white cheddar 😉 But the answer is to just eat lots of veggies, no matter how they’re grown!

There’s another big issue here that’s not as black and white as “organic” or “conventional”. If nutrient-rich soil is of utmost importance for you, then you’ll need to do some research and look into the farms growing your produce. As stewards of the land, good farmers – whether of organic or conventional crops – take great care of their soil, crops and livestock, which is the most integral part in creating healthy, wholesome foods.

Thinking about it a different way, let’s say you lease a modestly-priced, mid-range SUV for your family, while your neighbors, the Joneses, purchase a top-of-the-line, luxury SUV. Darn those Joneses! Three years later, when the lease is up, you’re eager to trade in your car because you’ve taken such good care of it. However, your neighbors have significantly damaged their once-sweet ride and must suffer the consequences. It’s not the model of the car, or the type of farm, that matters…it’s the owner – the farmer.

I hope this has been enlightening for you as doing this research was for me. It’s definitely opened my eyes to how easily we make decisions based on marketing and misperceptions without thinking about what’s really important – our ongoing health and wellness that can only be achieved by making sound dietary choices.

For my family and me, that means paying less attention to gimmicky food labels and simply just eating tons more fresh fruits and veggies, organic or not.

Organic foods are overseen by the USDA’s Agriculture Marketing Service and must be produced while protecting natural resources, conserving biodiversity, and using only approved substances and technologies. Contrary to misconception, it doesn’t mean organic foods are better. Just take heart knowing you can’t go wrong with eating lots of vegetables and fruits every day, whether conventional or organic!

Hillary Kaufman covers food trends and technological advances in health for Dirt-to-Dinner, a site dedicated to helping you better understand how your food is grown. She graduated from Northeastern University in Boston with a B.S. in Business Administration