Can DNA predict who might be a mass murderer?

Ricki Lewis | January 31, 2020
This article or excerpt is included in the GLP’s daily curated selection of ideologically diverse news, opinion and analysis of biotechnology innovation.

Investigating a mass murder initially looks for obvious triggers in a criminal’s life, then more subtle signs, then psychiatric explanations or a brain tumor. But can errant genes help push someone to bomb marathon runners, gun down elementary school children, set a nightclub afire or rain bullets down on concert-goers?

We still don’t know what drove Stephen Paddock to meticulously plan and carry out the Las Vegas massacre. He took anti-anxiety medicine and his father was a bank robber. But robbing banks isn’t an inherited trait and millions of people take anti-anxiety medication. But could a hint of what was to come have been found in his genes?

Researchers have hunted crime genes for half a century. Consider a 2017 study published in JAMA Psychiatry  suggesting that so many genes contribute to the anti-social behavior behind criminality that using such information may never be practical, and might even do more harm than good.

Genetic explanations for criminal behavior have a sparse, if intriguing, history. Three classic attempts to assign crimes to DNA hit at the family, chromosome, and gene levels.

In the 1870s, Elisha Harris — a physician affiliated with the New York Prison Association who liked perusing records — noticed certain family names of prisoners cropping up, particularly at one facility in Ulster County, a leafy upstate area where people sick of city life tend to go, even today. He wondered: Could prisoners sharing a surname indicate an inherited component to criminal behavior?

Harris traced an upstate extended family of prisoners back seven generations to a Dutch immigrant, “Margaret, mother of criminals.” Harris was too busy to pursue the matter, so another member of the prison association and self-appointed sociologist, Richard Dugdale, dug deeper.

Dugdale dubbed the family the Jukes, and the findings gained notoriety. Oliver Wendell Holmes wrote, of Margaret’s descendants: “Two hundred of these are recorded as criminals, and a large number of the others, idiots, imbeciles, drunkards, and of otherwise degraded character.” Dugdale wrote a book, “The Jukes: A Study in Crime, Pauperism, Disease and Heredity” and an excellent recent analysis of the Jukes is in the book “The Unfit: A History of a Bad Idea.”

The Jukes were white and poor. Dugdale’s book influenced social scientists to probe similar families for criminal tendencies, which they attributed to an inborn degeneracy that, if not stopped, would cost society greatly. The book fed into the then-fledgling eugenics movement, and in 1911, researchers at the Eugenics Record Office in Cold Spring Harbor described the Jukes’ problem as “feeblemindedness, indolence, licentiousness, and dishonesty” — declarations used for a time to justify compulsory sterilization.

But it was all based on, if not an outright lie, an oversimplification that led to erroneously assigning a trait to heredity.

In 2003, researchers digging through archives at the State University of New York at Albany discovered the real names of Dugdale’s prisoners, many of whom were not related. They also uncovered evidence that Richard Dugdale had named the family “Jukes” after the phrase “to juke,” which referred to a chicken that dropped eggs anywhere. Many members of the targeted families were in fact decent citizens, some even holding public office. The extended Jukes family prone to crime didn’t exist.

Anyone who watches TV crime shows knows the history of having an extra Y chromosome, which played a key role in the “Born Bad” episode of Law and Order. 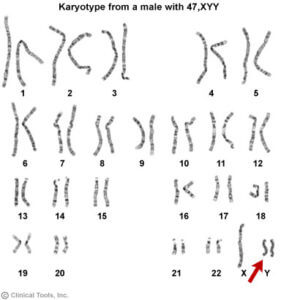 In 1965, geneticist Patricia Jacobs surveyed 197 inmates at a high-security prison in Scotland and found that of twelve men with unusual chromosomes, seven had an extra Y. The extra chromosome was then found in men in other prisons and in mental institutions. Newsweek ran a cover story on “congenital criminals” and XYY syndrome, aka Jacobs syndrome, became a legal defense for committing a violent crime.

In the early 1970s, to intervene in the genetically inevitable, hospital nurseries in England, Canada, Denmark, and Boston began checking for the telltale extra Y among boy babies, and following up with social worker visits to offer “anticipatory guidance” to the parents on dealing with their toddling future felons. Reason prevailed and by 1974 the screening programs stopped.

One male in 1,000 has an extra Y chromosome, and 96 percent of them won’t end up in prison. But a man with an extra Y may grow fast, have acne, and have trouble with speech and understanding language. These characteristics might lead authority figures to overestimate age and expect more, causing stress that might flare into aggressive behavior.

For many years, twin studies have suggested a genetic component to criminal tendencies. One of the first papers to blame a specific gene, from 1993, analyzed a large Dutch family in which several males have “a syndrome of borderline mental retardation and abnormal behavior … that include(s) impulsive aggression, arson, attempted rape, and exhibitionism.”

The men lack an enzyme, monoamine oxidase A (MAOA), due to a mutation in a gene on the X chromosome. The enzyme normally dismantles several neurotransmitters. 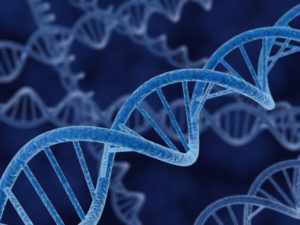 Reports of other families followed. Then a study from 2002, “Role of Genotype in the Cycle of Violence in Maltreated Children,” nailed the MAOA connection.

The researchers checked variants of MAOA among 1,037 children and assessed their behavior and degree of maltreatment at several times between the ages of 3 and 26. Abused kids with high levels of the enzyme were less likely to become antisocial than abused kids with low levels. “These findings may partly explain why not all victims of maltreatment grow up to victimize others, and they provide epidemiological evidence that genotypes can moderate children’s sensitivity to environmental insults,” the investigators wrote.

Related article:  Why do some elite athletes die during intense exercise? The answer may be in their genes.

A study of criminals in Finland implicated two genes, LINC00961 and LRFN2, in antisocial personality disorder. LRFN2 controls neuron sprouting in the memory center of the brain, and LINC00961 enables injured muscles to regenerate. Although a connection of these genes to crime isn’t clear, the potential power of a genome-wide association study (GWAS), used to find them, is. A typical GWAS looks at millions of single-base sites in genomes among thousands of individuals and derives signatures that track with a particular trait – like tendency to criminal behavior.

Vast databases of citizen DNA are already available to peruse potential criminality genes. Millions of us have swabbed the inside our cheeks and spit into tubes and merrily mailed our genetic material to direct-to-consumer companies to probe our pasts and futures.

What if extensive genome-wide association studies compared all that lovely DNA from ordinary people to the large forensic DNA databases that have been accruing in many nations since the mid-1990s?

The data pool is deep. The UK National DNA Database has samples from more than 6 million individuals and the Combined DNA Index System (CODIS) in the US has more than 10 million samples. Forty other nations use CODIS in forensics.

Although CODIS considers only 13 short repeated sequences in the genome, these combine in enough ways to uniquely identify everyone. If the DNA itself is still stored (and not just the info), then could a GWAS on it reveal patterns of gene variants that appear significantly more often among criminals? If the numbers are big enough and crime genes exist, such a study might just do that.

But if forensic DNA databases are ever compared to general population DNA databases to ferret out criminal genotypes, at least two caveats are in order.

First, DNA would need to be de-identified, because the goal is research, not implicating individuals.

And second, forensic DNA databases must come from nations that do not preferentially arrest and prosecute the darker-skinned. The most notorious mass murderers in recent US history are in fact pale: Eric Harris, Dylan Klebold, James Holmes, Dylann Roof, the Tsarnaev brothers, Seung-Hui Cho, Timothy McVeigh, Omar Mateen, Marshall Applewhite, Adam Lanza, and now Stephen Paddock, the Las Vegas killer. Perhaps the DNA databases from outside the US better represent the populations. 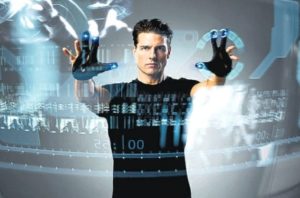 Might identifying genetic signatures of criminality, against a backdrop of environmental triggers, reveal future Stephen Paddocks? Or would this capability plunge us into the world of Minority Report, the 2002 Tom Cruise film in which police in a dystopian society arrest and punish people before they’ve committed crimes?

DNA and crime is a touchy topic. In 1992 NIH yanked funding from a conference on “genetic factors in crime” at the University of Maryland, with charges of it being a “modern-day version of eugenics” (which is actually timeless). But the issue of hunting for crime genes may resurface if a motive for Paddock’s behavior remains elusive. Meanwhile, there’s scant support for or evidence of a value for probing genomes to catch criminals.

UNESCO’s Universal Declaration on the Human Genome and Human Rights is coming up on its 20th anniversary on November 11. But the report refers to “research, treatment or diagnosis” and doesn’t mention use of DNA information in mental health or forensics.

A report by the Forensic Genetics Policy Initiative sought to protect people from intrusive use of their DNA information, stating that “the private sector should not be treated as an agent for law enforcement or surveillance” and that consumers should be informed if police might have access to personal DNA data. That would kill the idea to compare databases.

The 2017 study on the genetics behind “antisocial personality disorder” is the closest investigation I’ve found to comparing general population and forensic DNA databases. The researchers considered 16,400 people, including regular folk, people with alcohol dependence, kids with “conduct disorder” or “rule-breaking behavior,” and the criminals from Finland. They found that overall, the genetic contributions to the antisocial behavior that could, in some circumstances, lead to violent crimes, are too small individually to be of practical use.

Someone is certain to suggest checking Stephen Paddock’s DNA. But the technology just isn’t robust enough to be of any help – yet.

A version of this story previously ran on the GLP on October 17, 2017.