This article or excerpt is included in the GLP’s daily curated selection of ideologically diverse news, opinion and analysis of biotechnology innovation.
Microbes have a well-deserved reputation as trouble makers. Invisible to the unaided eye, they cause disease, spoil food, and threaten our crops, houseplants, and gardens. Long before microbes were discovered, their harsh impacts on health were postulated by people like the ancient Roman scholar Marcus Terentius Varro. He warned against living near swamps because the unseen creatures breeding there could cause disease. In 1675, Antonie van Leeuwenhoek observed microbes under a microscope and provided the scientific evidence to confirm Varro’s suspicions.

But not all microbes foster death and disease. Different species of Lactococci and Streptococci make cheese with characteristic aromas and textures. Symbiotic rhizobia colonize the roots of legumes like soybeans, producing usable nitrogen the plants need to grow. Our guts contain thousands of different types of bacteria that help us digest food and fight off pathogens. 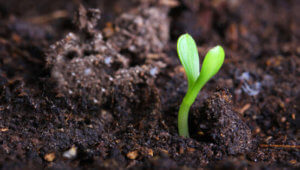 More and more studies are beginning to look at microbiomes – the communities of microorganisms that inhabit specific environments – and the role they play in the growth and health of plants, animals, and humans. Recently, a research group at Brigham Young University (BYU) examined how microbiomes associated with certain plants help them survive in salty soil. The study brings us one step closer to cultivating crops in previously infertile soil, and thus producing enough food to feed a growing and increasingly wealthy global population.

The problem of salty soils

Salty (or “salinized”) soils accumulate soluble salts that inhibit plant growth. This most commonly occurs when water containing dissolved salts evaporates from the soil, leaving the salts behind. Salinized soils occur naturally when water runoff collects in a basin with no outlet or through practices like irrigation, especially in coastal areas.  More recently in the US, there have also been reports of saltwater intrusion, where saltwater contaminates groundwater due to rising sea levels.

An estimated 20 percent of global irrigated land is affected by salinization, leading to a yield reduction for the crops grown on those soils. For example, after comparing normal and salt-affected soil in India, researchers found that salinized farmland could lower cotton and corn yields by an average of 63 and 39 percent, respectively. Several strategies have been devised to reverse soil salinization, such as improving drainage, minimizing evaporation and leaching the salts below root level through application of low-salt water. But these solutions can be costly, making them impractical in many cases.

Fortunately, a more viable solution is on the horizon: salt-tolerant plants. Scientists have been trying to breed more salt-tolerant varieties of common crops for years. And while there have been some successes, including wheat and rice, progress has been slow. Instead of breeding for salt tolerance, the group at BYU set out to identify bacteria from the rhizosphere (the region of soil surrounding plant roots) of halophytes that might help accomplish the same goal. Halophytes are naturally salt-tolerant plants that grow in deserts, marshlands, and along ocean coastlines. Probably the best-known examples of halophytes are mangroves: the tropical trees and shrubs that grow in some swamps and on coastlines.

For this project, which was published in the journal Frontiers in Microbiology, the BYU group sampled soil and root tissue from three halophytes native to Utah: Salicornia rubra, Sarcocornia utahensis, and Allenrolfea occidentalis.

The samples were then cultured on Petri dishes and 41 different bacterial isolates were identified. The researchers tested each bacterial isolate for salt tolerance and discovered that some isolates could tolerate exposure to salt at levels commonly found in the ocean.

To see if any of the identified bacteria had plant growth promoting properties, the team inoculated alfalfa growing in both lab and greenhouse conditions. In the end, one bacterial isolate from the genus Halomonas and another from Bacillus were identified as promoting alfalfa growth at one percent sodium chloride (about 1/3 the concentration of sea water), with control plants showing growth inhibition. While this is not the first study to look at using halophyte microbiomes as a way to promote crop growth under saline conditions, it was among the first to study microbes native to US desert soil.

A review from 2018, also published in Frontiers in Microbiology, explained that halophytes are able to survive in such harsh conditions because they have internal mechanisms that help them tolerate high salt exposure and have evolved to exploit the benefits provided by microbes living in and around their roots. The nature of this relationship varies depending on the species of microbe and the plant itself. In some cases, the microbes minimize plant salt uptake by releasing exopolysaccharides that bind sodium ions. In others, the microbes may help the plant stimulate production of antioxidants and thus minimize the consequences of salt toxicity.

Many of the growth-promoting rhizobia help their associated plants by producing phytohormones, enzymes that break down the plant stress hormone ethylene and (or) increasing the availability of minerals like phosphorus and iron. In other words, the microbes improve plant nutrition and produce compounds that stimulate growth while helping break down those that inhibit growth.

Reclaiming what was lost

Using microbes to increase plant salt tolerance could help us reclaim land that is no longer fit for agriculture. With the global population projected to reach 9.8 billion people by 2050, every inch of arable land will be needed to produce enough food to feed everyone—and we’re already farming half of the suitable land on the planet. While the best course of action would be to reverse the damage done to soil, that may not be practical in many cases. Devising new ways to use salinized soil may be our most promising option.

Tautvydas Shuipys is a PhD candidate in the Genetics and Genomics Graduate Program at the University of Florida. Follow Tautvydas on Twitter @tshuipys