Viewpoint: The Impossible Burger has sparked an ideological rift between anti-GMO critics

If you stand for nothing, Burr, what will you fall for?

–from Hamilton, by Lin-Manuel Miranda

For years, anti-biotech activists were primarily focused on labeling foods made with genetically modified ingredients as a way to stigmatize “GMOs” and ultimately get them removed from the market place. Their rhetoric was forceful and combative, which made clear that it was a strategy to punish companies who used genetically modified ingredients. According to Andrew Kimbrell, head of the anti-GMO litigation group Center for Food Safety:

We are going to force them to label this food… If we have it labeled, then we can organize people not to buy it.

The Organic Consumers Association, which provided seed money to establish the anti-biotech advocacy group US Right to Know (USRTK), likewise admitted the labeling push was a way to grab market share:

The burning question for us all then becomes how – and how quickly – can we move healthy, organic products from a 4.2% market niche, to the dominant force in American food and farming? The first step is to demand truthful labels on so-called “natural” products and GMO labels on all foods containing genetically engineered ingredients.

But the GMO labeling debate began to subside when Congress passed the USDA-administered National Bioengineered Food Disclosure Law in 2016, which established federal label standards for foods made with genetic engineering. So I wondered where the previously employed label activists would turn for their next gig. For those interested in remaining in the food space, a curious bifurcation arose.

Some of them headed to the newly energized and explicitly non-GMO “regenerative agriculture” movement, that claims it can solve all of agriculture’s problems by using grazing animals for carbon storage and biodiversity benefits. Another group, though, wanted to tackle agriculture’s problems by removing animals entirely—the “plant-based foods” movement. The latter group has not yet taken a public stand against crop biotechnology and sees food labeling as a roadblock to promoting eco-friendly vegan diets.

These redrawn battle lines expose a growing ideological rift in a once-cohesive anti-GMO movement and appear to signal a shift in the food safety debate. High-profile environmental groups and influential activists previously aligned in a campaign against biotechnology and corporate dominance of the food system are now fighting with each other over food labels, GMOs and the future of sustainable farming.

This turn of events has created some uneasy alliances among previously embattled enemies. Some cattle farmers and their allies find themselves using techniques piloted by anti-GMO activist Vani “the Food Babe” Hari to discredit plant-based food products, such as Impossible Foods’ meat-free burger. Some plant-based food producers are responding with invective previously aimed at coal producers to shore up their environmental cred. It’s been interesting to watch the verbal volleying.

For example, Charles Mann, author of several books exploring the history of technology, recently highlighted one dust up during which some plant-based meat producers described regenerative cattle farming as the “clean coal of meat.” University of California, Davis animal science researcher Frank Mitloehner has in turn promoted a meme, popular with beef producers, comparing plant-based burgers to dog food. 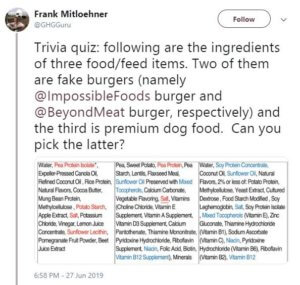 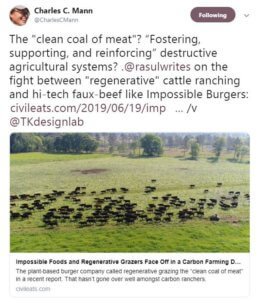 In case you’re not keeping score, the meat industry, usually a vociferous defender of biotechnology, has aligned itself with Consumers Union, ETC Group and the Food Babe, all of whom see genetic engineering as a seriously risky endeavor. The animal rights group PETA has applauded Burger King for selling Impossible Whoppers, and the New York Times, a critic of the biotech industry in years past, now publishes columns arguing that GMO burgers “will save us.” Welcome to 2019.

GMO meat substitutes have been available for several years. For example, I have enjoyed Morningstar Farms products for a long time, and I celebrated in 2016 when the label indicated the company uses genetic engineering to make their tasty beef-free patties. Anti-GMO activists, though, decried these “Big Food” products and their maker’s undue influence on the food system. But the recent success of plant-based foods has fueled some seismic shifts in anti-biotech circles. Even the Union of Concerned Scientists, once a fierce opponent of crop biotechnology, seems to have changed direction following the introduction of new animal-free burgers:

Whether or not the Impossible Burger is the answer, beef certainly isn’t, said Ricardo Salvador, director of the food and environment program at the Union of Concerned Scientists.

If Impossible Foods ‘is successful with what they’re doing and people accept it, the environmental load they’ll be removing is such that the benefits would be innumerable,’’ Salvador said.

So a few months back when I saw that Morningstar Farms had co-sponsored a Plant-Based Foods Association (PBFA) event, I was particularly tickled. Morningstar has proudly championed their membership in PBFA, a trade group for the plant-based meat industry. I realized that two other high-profile meat-alternative companies were members of this organization, too: Impossible Foods, which proudly endorses genetic engineering, and Beyond Meat, which hypes its “non-GMO ingredients” at every opportunity. This was a curious  arrangement because the executive director of the Plant Based Foods Association, Michele Simon, had taken this stand in March 2014: 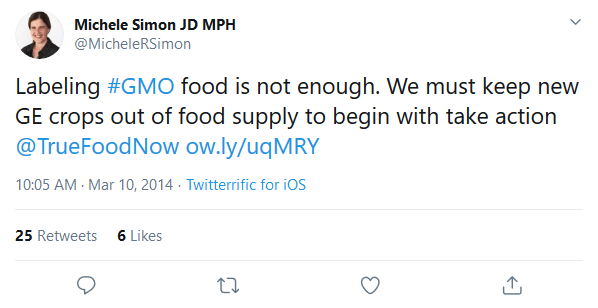 Simon had worked with Gary Ruskin (co-founder of US Right to Know) during the California Prop 37 GMO labeling campaign, the organic industry’s statewide effort to label foods made from genetically modified crops. This is quite a remarkable turnaround. Simon’s job today is to support these innovative plant-based food products. The PBFA now battles what they perceive to be unfair and “disparaging” labels on their clients’ products. In the case of new meat labeling laws, here’s what Simon says:

The Mississippi law would create unnecessary, confusing, and costly label changes that would stifle innovation and frustrate consumers.

The Grocery Manufacturers Association, whose members include PepsiCo., Kellogg Co. and hundreds of other large food companies, leads the charge against GMO labeling, saying it would be too costly to implement and is unnecessary because GMOs are proven safe.

Like Gillam, Michele Simon criticized the Grocery Manufacturers Association’s stand on Prop 37 in her role with Ruskin’s campaign. Since then, she seems to have reversed her position on GMOs, promoting the environmental benefits of these GMO-derived alternatives to animal products, and battling unnecessary and costly labels.

Science has shown that conversion stories can exert powerful influence for change on GMO-related issues. So I wondered: what is the PBFA’s official position on GMOs and the gene-editing techniques that are bringing new foods to our plates? Could this be another informative conversion story? I set out to learn more.

First, I contacted their general “information” email address to ask for any policy statements they have on GMOs and gene editing. Program Coordinator Ciara LaChaux responded: “We don’t have a statement on GMO or gene edited plants.” To clarify, I asked if there were any barriers to membership for companies that offer genetically engineered or gene-edited products, to be certain these businesses are welcome in the trade group and promoted by PBFA. There was no response.

Next, I tried their official media contact route. Again, I asked if it was fair to say there were no barriers. I also asked if Michele Simon had changed her position on these issues. Michael Robbins of Moak Group (the contact listed on the web page) refused to answer my inquiry. 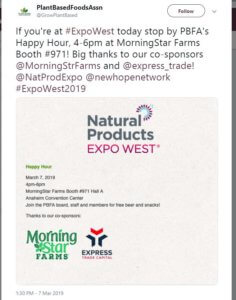 Finally, I tried Michele Simon directly. I’ve seen her involved lately in conversations about the language used to describe plant-based products. She has said she wants to discuss the issues around the composition of her clients’ products. I assumed that she really meant it and submitted my same questions to her. I offered her the chance to tell her story. She has not replied.

I would have welcomed the chance to tell a conversion story about how plant-based food changed someone’s mind about crop biotechnology. I would really like to know what changed for Simon. But instead, I was stonewalled. Michele Simon used to have really strong feelings about the composition of foods and what influenced food producers when she was openly opposed to GMOs; she thought it was important that consumers have answers to crucial science-related and public policy questions. Ironically, she called out “Big Food” players like Kellogg in her scathing report about industry conference sponsorship and scientific influence on public policy.

Guess who owns Morningstar Farms? Kellogg. Moreover, this food giant subsidiary is one of Simon’s PBFA members. The GMO food producer even co-sponsored a PBFA event at a recent conference, which the industry group promoted on Twitter.

And in what might be the ultimate irony , I recently spotted the first use of the new USDA Bioengineered food label on a product. Impossible Foods is proudly bearing the official GMO label on their retail products. 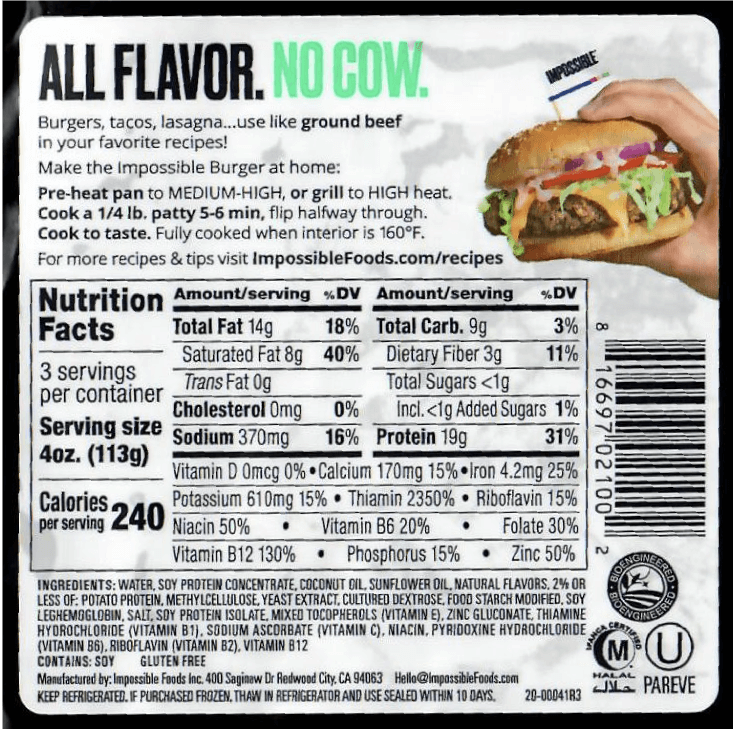 These changing alliances and priorities raise several important questions that we can’t yet answer but are worth pondering. First, were the organic industry-funded California labeling campaigners really concerned about protecting consumers from genetic modification? If GMOs pose a threat to human health (they don’t), why were Simon and other activists willing to effectively switch sides in the debate? Second, does the Plant Based Foods Association truly accept the benefits of crop biotechnology, and, if so, are we seeing the anti-GMO movement splinter as US consumers happily munch on GMO-derived burgers?

Mary Mangan holds a PhD in cell, molecular, and developmental biology from the University of Rochester. She co-founded OpenHelix, a company that provides awareness and training on open source genomics software tools. Follow her on Twitter @mem_somerville