Our immune system can defeat cancer. Immune cells can directly attack cancer cells or produce proteins that don’t let tumors grow and spread. But targeting these defenses against the right cells in the right time is tricky. Synlogic, a synthetic biology company from Cambridge, MA, thinks that bioengineered bacteria can help our organisms kill growing tumors in a very precise manner.

Cancer is a generic term that describes a lot of different disease that share one feature: cells that grow and divide uncontrollably. These cancer cells form in a specific tissue, they change, they form tumors, and they start diverting food and other nutrients from the surrounding tissue to feed their non-stop growth. At the final stages of the disease, the cancer cells start migrating to neighboring and distant tissues, establishing more tumors.

Cancers are very challenging for our immune system to defend against. Cancer cells have changed their form and protein content, which lets white blood cells recognize them and kill them the same way as any microbe. However, tumors often start in isolated tissues and are not easily accessed by immune cells that circulate in the blood. Moreover, the tumor cells are not always easy to distinguish from the normal tissue cells they come from. As a result, an immune system overreaction could neutralize the cancer, but also cause damage to the organs or autoimmune disease. Ideally, the white blood cells will be attracted only to the tumor, they will learn how to recognize only the tumor cells, and act swiftly and for a limited time. 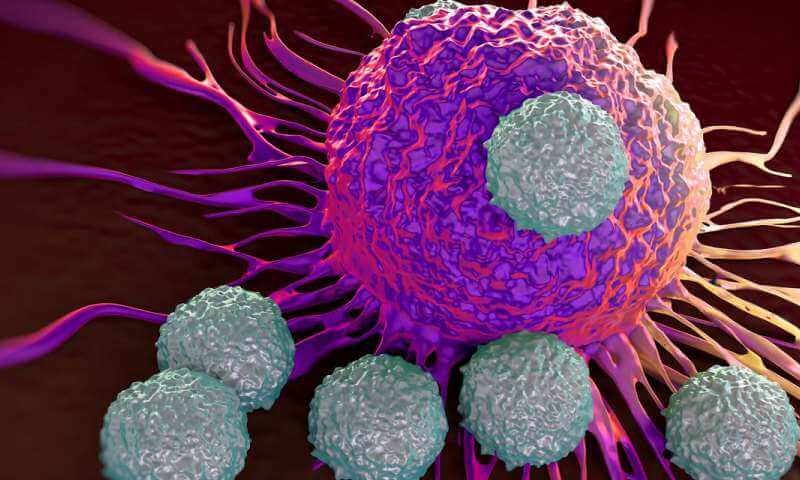 There are a few ways to direct the immune system response against cancers. One roundabout approach is to infect the tumor with pathogenic bacteria. This idea is around since the 2600 BC, when Egyptian physicians were making incisions to let bacteria infect tumors. More recently, Coley’s toxin – a mixture of dead bacteria – was tested for cancer treatment or prevention. The bacterial presence in the tumor draws in the immune system cells. The immune system reacts to the infection. And as it gets activated, it also kills cancer cells. The bacteria may also release toxins that actively suppress the tumor.

However, there are obvious disadvantages in administering natural pathogens to a patient, and the benefits of such treatments are dubious or even dangerous. The pathogens are not safe, they can cause severe side effects, the response is not controlled, and a positive result is not guaranteed. But if a natural pathogen isn’t ideal for this job, how about a safe microbe that can cause the same effect in a controlled manner?

Synlogic is a biotechnology company known for using probiotics as living medicine. The company is known for engineering bacteria, normally found in human gut, to treat metabolic disorders. But in a recent article published in Nature Communications, Synlogic explored the use of their probiotic as a cancer-curing agent. The cancer-fighting microbe is designed to work in the following way:

Related article:  Is organic produce hazardous to your health?

2) It produces a small molecule that draws and activates the immune system cells that recognize “invaders”.

3) it stays alive only for a few days and doesn’t survive in the environment.

The scientists engineered the Escherichia coli Nissle 1917, a common probiotic, to deliver cyclic d-AMP, a molecule that acts as a signal for the immune system. They also mutated the bacteria to make them unable to grow either inside the human body or in the environment.

The Synlogic researchers tested the engineered microbe’s therapeutic efficiency in human cells in the tube, as well as in living mice with cancer. They found that the engineered cells caused the expected immune response in mice and human cells, activating immunization through the produced cyclic d-AMP. More importantly, the mice tumors stopped expanding and in many cases they disappeared completely. They also verified that the engineered bacteria disappear a few days after the treatment and they don’t infect the neighboring tissues.

Synlogic is now testing the engineered bacteria as a cancer treatment in a Phase 1 clinical trial, as announced in a recent statement. The company has several probiotic medicines in the pipeline and aims to offer both metabolic and immunomodulation (interacting with the immune system) treatments. But the encouraging initial results do not mean that we will definitely see a treatment soon. Synlogic learned this lesson the hard way when they had to discontinue clinical trials on a probiotic treating hyperammonemia due to poor clinical results. Also, their approach will not work at many cancer types, such as leukemia or aggressive metastatic cancers. However, it may become an important addition to the physicians’ arsenal against disease that is among the leading causes of death worldwide.

Microbes are everywhere and they interact with every plant and animal, any living system. Probiotics, combined with synthetic biology, can cure metabolic disease, prevent hangover, and boost athletic performance. But they can also help plants fix their own nitrogen out of thin air or protect bees from parasites.

Modifying microbes is a great shortcut for biotech applications where engineering the target organism (crops, animals or humans) is very hard or undesirable. As synthetic biology is evolving to engineer new interactions between organisms, we will see more out-of-the-box thinking and creative applications. And hopefully bacteria targeting and treating any kind of disease will reach clinics and the patients that need them.