Infographic: How COVID-19 mutated to infect the world

A change in the virus was appearing again and again. This mutation, associated with outbreaks in Europe and New York, eventually took over the city. By May, it was found in 95 percent of all the genomes ….

At a glance, the mutation seemed trivial. About 1,300 amino acids serve as building blocks for a protein on the surface of the virus. In the mutant virus, the genetic instructions for just one of those amino acids — number 614 — switched in the new variant from a “D” (shorthand for aspartic acid) to a “G” (short for glycine).

But the location was significant, because the switch occurred in the part of the genome that codes for the all-important “spike protein” — the protruding structure that gives the coronavirus its crownlike profile and allows it to enter human cells the way a burglar picks a lock. 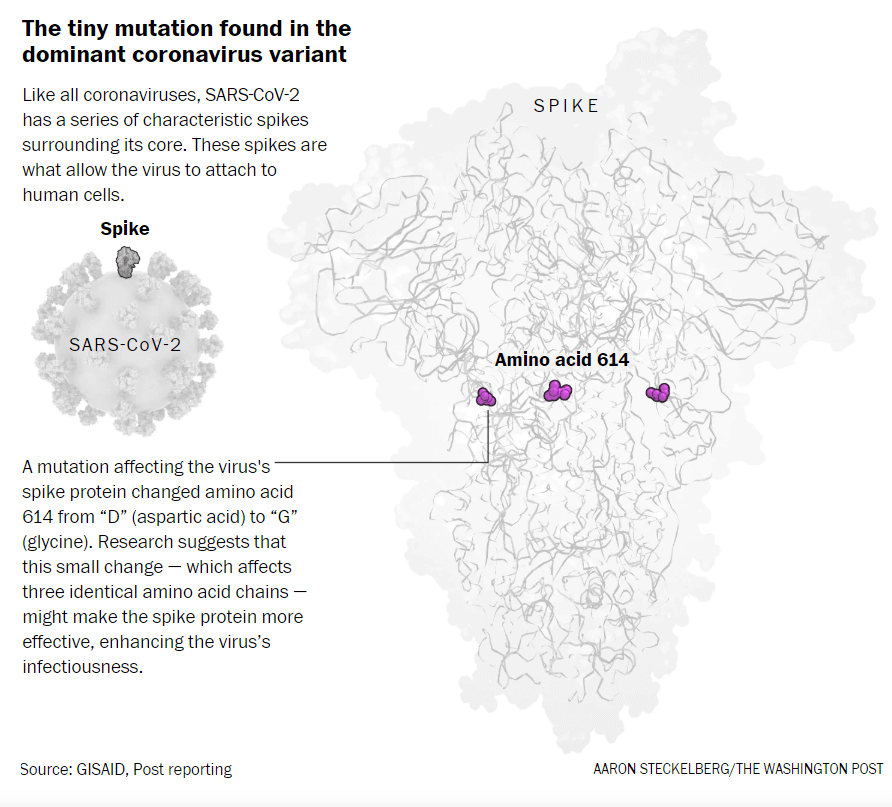 “G” hasn’t just dominated the outbreak in Chicago — it has taken over the world. Now scientists are racing to figure out what it means.

At least four laboratory experiments suggest that the mutation makes the virus more infectious, although none of that work has been peer-reviewed. Another unpublished study… asserts that patients with the G variant actually have more virus in their bodies, making them more likely to spread it to others.

The mutation does not seem to lead to worse outcomes in patients. Nor did it alter the virus’s response to antibodies from patients who had the D variant, [virologist Hyeryun] Choe said, suggesting that vaccines being developed based on the original version of the virus will be effective against the new strain.