Viewpoint: GMO vs non-GMO foods? There’s no difference to your body or health

This article or excerpt is included in the GLP’s daily curated selection of ideologically diverse news, opinion and analysis of biotechnology innovation.
According to a survey done by GMO Answers, only 32 percent of consumers are comfortable having GMOs in their food. Google “GMOs” and you will find a plethora of scary statements:

‘GMOs damage our microbiome and can cause a leaky gut.’

‘GMOs may make my genes mutate and cause cancer.’

No wonder consumers are concerned! At D2D, we’ve heard comments like these all too often. So we dug into exactly what happens in our bodies when we eat food that has been grown with a GMO.

First off, let’s understand a little more about GMO crops. As you may know from reading our previous post, GMOs are Confusing: A Recipe for Understanding, genetically changing a crop simply means adding in one or two targeted genes from another organism to achieve a desired outcome.

Related article:  DNA analysis shows ‘everyone had been wrong’ about mysterious Siberian unicorn

Another thing to know is that there are only 10 commercially available GMO crops: corn, soy, cotton, canola, sugar beets, alfalfa, papaya, squash, apples and potatoes. If you read something scary about “GMO wheat”, or even see “Non-GMO water”, consider yourself armed with knowledge because now you know there’s no such thing.

What exactly happens when you eat a GMO?

As I write this, my husband and I are watching the pink and orange sunset from our garden patio. While dipping my corn chips in the salsa, my husband wryly asks if it contains any GMOs. I chew the corn chip and salsa. Whether the corn chip has GMOs or not, it is still loaded with genes. Every living organism has genes and corn has as many as 32,000 genes.

I am pretty confident that my body knows how to digest proteins as it has been doing so my entire life. I have eaten tons of GMO food over the past 20 years and I am still healthy. How does my body do this?

Using enzymes in my saliva and intestine, I, like all humans, am able to digest hundreds of thousands of proteins every single day. Trypsin and Chymotrypsin are digestive enzymes found in our saliva, gut, and small intestine, that break proteins down into peptides and amino acids. Our bodies use these as building blocks which, in turn, produce new proteins that control hormones, create muscle, and other very necessary functions. In fact, every cell in our bodies have proteins that were directed by specific genes.

Digesting GMO and Non-GMO Foods: It’s All the Same! 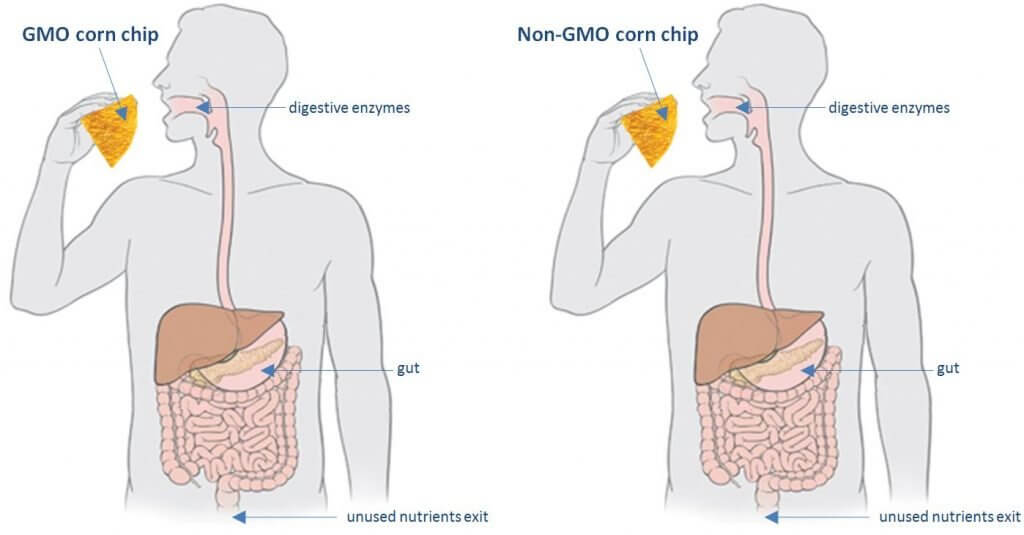 Simply put, GMOs provide a few added proteins into the crop. By inserting these genes into the DNA, researchers are ultimately adding in a non-corn protein to the corn plant. These proteins may provide either additional nutrition to a crop, give a crop insect resistance, tolerate herbicides, or even create a greater yield.

Different types of proteins are affected in a variety of ways when cooked. For instance, Bacillus thuringiensis (Bt) is a soil bacterium that produces a protein that kills corn-attacking insects and is a common gene inserted into corn crops. These Bt proteins in my processed corn chips become inactive after cooking. If, by chance, there are any small protein pieces left, they are attacked by the enzymes in the mouth and stomach. They are then converted into amino acids, where the body can either use them to build its own proteins, use them for energy, or break down and exit the body.

But what if it isn’t cooked? You may have read about the citrus greening disease, which has killed millions of citrus plants in the Southeastern U.S. via an infected insect. To combat this, a GMO orange was created to resist the citrus greening. An anti-citrus greening gene from the spinach plant was isolated and inserted to protect the trees.

So, if you are allergic to spinach, will you now be allergic to genetically modified oranges? No, because the specific gene from the spinach plant was tested for human allergens before it was used in oranges.

What studies have been done to ensure human safety?

First of all, to be sold commercially in the United States, the EPA, FDA and USDA must agree that the genetically-modified crops are safe for human consumption and for the environment. Before a GMO comes on the market it is tested for human allergies and toxicity. Clinical testing has been conducted to determine changes to a genetic profile, effects on fertility, effects on internal organs, and nutritional composition.

In addition, health groups such as the American Medical Association, WHO, Mayo Clinic, Royal Society of Medicine, European Commission, American Council on Health Science, OECD, FAO, American Society of Microbiology, just to list a few, have all concluded – from independent research – that GMOs are safe in our food system.

Researchers in the US and countries around the world have completed hundreds of individual peer-reviewed studies that report on tests on GMOs in the environment and on human and animal health. The Center for Environmental Risk Assessment has compiled a database open to the public where you can see most of these studies. The U.S. National Academy of Sciences has also compiled a most comprehensive research on genetically engineered crops and food.

Given the extreme testing that GMO crops are subjected to, some scientists even argue that they are safer than traditional crops!

Some conventional crops carry genes that have the potential to cause harm when eaten. When a non-GMO potato is deep fried, a new chemical is created during the cooking process: a carcinogen called acrylamide. A variety of GM potatoes have been altered to produce less acrylamide when deep fried than a regular potato. To reduce the levels of acrylamide created from the cooking process, a natural protein is added to potatoes to reduce the production of this carcinogen.

Food fear is so prevalent online. For instance, GMO FLAVR SAVR tomatoes are not even on the market anymore, but critics continue to talk about them. The gene used to keep it fresh was the ‘reverse’ of the tomato fruit enzyme, which softens fruit but the public demanded it gone from grocery stores due to pervasive misunderstanding about GMOs. 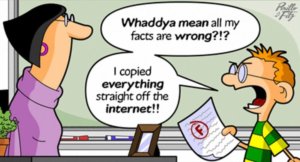 Understandably, with all the information we read on the internet, it is hard to know what to believe. As I eat my chips and salsa, short of conducting the research myself, I choose to believe the 30 years’ work of independent scientists, researchers, and government organizations that have been published as peer-reviewed studies. The science says my corn chips are safe, so I confidently eat another chip and pass the bowl to my husband.

Our bodies cannot tell the difference between GMO and non-GMO foods. The enzymes in our saliva and digestive tract break down the proteins in our food the same way, whether the food you eat is genetically engineered or not.

Lucy M. Stitzer is a food writer and regular contributor at Dirt to Dinner. She served on the Board at the food company Cargill for many years.

This article originally appeared on GLP on July 24, 2019 and was published as part of a partnership with Dirt to Dinner. Follow D2D on Twitter @Dirt_To_Dinner