This article or excerpt is included in the GLP’s daily curated selection of ideologically diverse news, opinion and analysis of biotechnology innovation.
Chile’s intense political unrest exacerbated by months of COVID-19 quarantine has temporarily overshadowed a relentless environmental, farming crisis: an intense drought—the worst in the country’s history— now moving into its tenth year. The last few months have offered a temporary respite, with rains reaching average levels. But Chile is in desperate need of longer term responses to worsening climactic conditions that threaten to intensify existing food shortages and jeopardize the nation’s vital agriculture industry.

Biochemist and president of the Chilean Society of Plant Biology Dr. Claudia Stange believes she is part of the solution. Climate change is here to stay, she believes, so it’s time to mobilize genetic technology and adapt. Stange and her colleagues at the University of Chile are gene editing new varieties of apple, kiwi and tomato to improve their nutritional content and resistance to drought and saline soils.

This is not the first major effort to harness CRISPR and and transgenics (GMOs) to improve the environmental hardiness or nutritional content of crops. Golden Rice, recently approved for roll out in the Philippines after more than two decades of stops and starts, is a humanitarian project initiated by university scientists to generate a GMO rice high in beta carotene, a precursor to vitamin A. Vitamin A is largely absent from the diets of millions of people in southeast Asia. This deficiency is to blame for 250 000 to 500 000  cases of childhood blindness every year, with half of them ending in death, according to the World Health Organization (WHO).

Dr. Stange’s first major project, launched in 2011 and financed with public funds, had a similar goal to that of Golden Rice: to develop an apple genetically modified to synthesize carotenoids. Due to technical constraints and an inability to get similar results using conventional plant breeding methods, genetic engineering was recognized as the best tool for producing what came to be known as the ‘Golden Apple’.

If the project is successful, it could be a major economic and health coup for Chile. It is the world’s fourth largest exporter of apples, so improving the nutritional profile of exported varieties would  boost its apple industry and benefit consumers worldwide, Stange told me:

Today consumers are looking for foods that are functional, that means, with a higher content of antioxidants, vitamins, etc. Those characteristics would be fulfilled by our apples with the highest content of carotenoids -which are provitamin A molecules- and antioxidants that counteract various diseases and aging.

The Golden Apple project successfully developed transgenic lines of biofortified apple seedlings years ago, but commercializing it was another matter. Although the development and cultivation of GMO crops like corn, soybean and canola is routine in South American countries including Brazil and Argentina, progress in Chile has been slowed by regulatory obstacles and political opposition to recombinant DNA technology.

Although the country imports large quantities of grain harvested from GMO plants in other countries, Chile’s biotech regulations would have prohibited the commercialization of home-grown Golden Apples. Chile currently exports locally cultivated GMO corn, soybean and canola seeds, mostly to the United States, Canada and South Africa. Facing regulatory obstacles, financing for the Golden Apple project dried up by 2014, bringing the research to an unceremonious end.

But the Golden Apple was recently given a faint breath of life. Stange was blocked in bringing her bio-fortified apple to market because it was transgenic—it involved the transfer of genes from one species to another. But with advances in gene editing, specifically CRISPR, a technique that has fueled development of a new generation of improved crops, an apple with similar traits could be developed without the use of ‘foreign’ genes. Chile is now growing gene-edited cereal, vegetable and fruit crops in field trials, although there is as yet no path to commercialization

In GMOs, one or more genes from another plant or organism are inserted into a plant of interest so that gene, when expressed, gives it beneficial traits the original plant didn’t have—for example, the production of provitamin-A, resistance to drought or pathogens.

In gene editing, molecular biology strategies are also used, but in this case it’s to avoid that a specific gene is expressed in the plant of interest. By specifically editing or mutating that gene, the plant presents positive traits that it didn’t previously have….They [genetic modification and gene editing] are two strategies that seek the same end. Only in the last one there is no exogenous DNA material. For this reason, it’s more easily accepted in countries where GMOs aren’t.

After Argentina became the first country to green light gene editing research for agricultural purposes in 2015, Chile followed in 2018 with a similar rule that allows the techniques to be used as long as no transgenes are added to the target plant. Brazil, the United States, Australia, Canada, Colombia, Israel, Japan and other countries subsequently enacted their own gene editing regulations.

Building on their earlier research, Stange and her team expanded work on Golden Apples in 2018, but this time with CRISPR. These next-generation apples will not only provide high levels of Vitamin A and more antioxidants, they will resist browning, which reduces food waste—the same effect achieved by the Arctic apple, developed using a different genetic engineering technique in Canada.

To date we are selecting apple seedlings that have the desired traits: this means, that they have edited the genes of interest, that produce less browning, higher carotenoid content and that are not GMOs. At the end of the year we will be able to have the first seedlings to be transferred to Los Olmos nursery, where they will continue the evaluation in the greenhouse and field.

“In the meantime, our team will continue to generate and select more lines so as to have a large number of plants that allows us to choose the best ones when they produce fruit,”  Stange adds about the project financed by CORFO and carried out in association with the Biofrutales Consortium and Vivero Los Olmos.

These apples won’t reach our tables for a while, however. Stange estimated that it will take five years to select the best genotypes of edited apple trees, before taking them to field production. 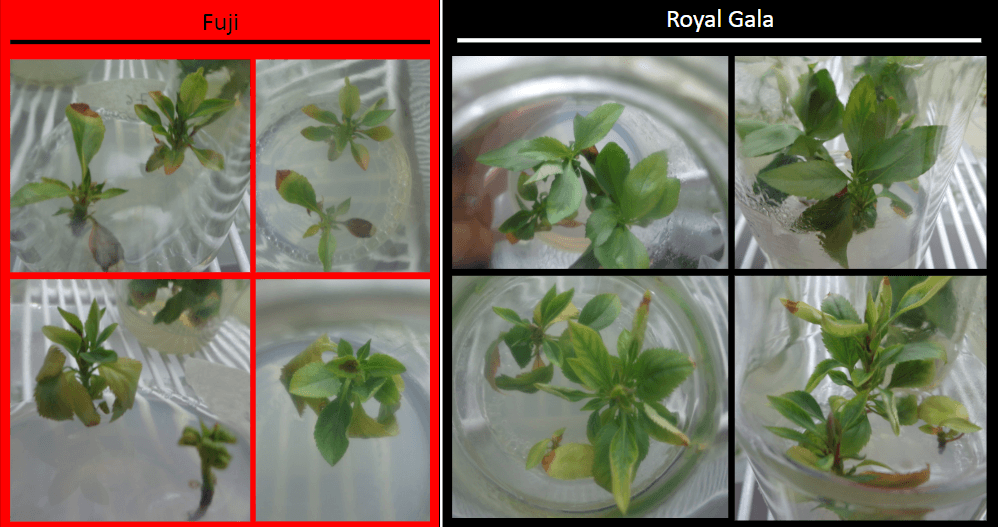 In March 2020, Stange’s laboratory launched another effort designed to address the impact of climate change on regional agricultural production: Proyecto Anillo (Ring Project) Plant Abiotic Stress for a Sustainable Agriculture (PASSA), financed by ANID. The project was developed with the help of Drs. Michael Handford and Lorena Norambuena at the University of Chile’s Center for Molecular Biology, in association with Dr. Juan Pablo Martínez from the Institute of Agricultural Research (INIA) and Dr. Ricardo Tejos from Arturo Prat University.

PASSA aims to develop drought- and salt-tolerant tomato and kiwi rootstocks with CRISPR, directly addressing the water emergency situation that is gradually worsening in Chile. Tomatoes are the most consumed vegetable globally and in Chile. The South American nation is also the third largest kiwi exporter after New Zealand and Italy. Shielding these crops from increasing water scarcity and desertification is therefore an essential objective.

Tomato and kiwi crops are very relevant to the country’s economy. In the case of tomato, we’ll study the traits of the ‘Poncho negro,’ a Chilean variety originating in the Azapa Valley (Arica) that has a high salinity tolerance and whose genetic breeding would increase the productivity of tomato 7742 (seminis), the most produced and marketed variety in Chile. [I]t can be grafted onto Poncho Negro.

Regarding kiwis, we will seek to increase salinity and drought tolerance of varieties used as rootstocks, to improve the productivity of Hayward commercial kiwi plants.

While the Golden Apple project requires established, fruit-producing trees, fruits are not needed to grow young kiwi and tomato plants; they can be evaluated at the laboratory and greenhouse level under conditions of drought and salinity.

Unfortunately, quarantine has forced the researchers to prioritize bioinformatic activities over laboratory experiments, delaying the project for up to six months. With this setback, it could take three years to edit the plants and evaluate them in field trials.

There is another technical obstacle that must be surmounted as well: adapting crops originating in other parts of world to local conditions:

Currently the new varieties are acquired by paying royalties to foreign companies.

This implies bringing those varieties [to Chile] and waiting a few seasons until they adapt to our edaphoclimatic conditions, with the expectation that they will produce the fruits as they are produced where they were generated. This is a risk. In our case, they are varieties already produced and marketed in Chile to which we will add these new traits.

Stange believes that the future for genetically engineered fruit, vegetables and grains will be brighter than the recent past. GMO crops are gradually being embraced and there is a growing global trend outside of precautionary-obsessed Europe towards relatively lax regulatory oversight of CRISPR gene editing. That could allow for the commercialization of new consumer-focused crop varieties, she says.

The benefit that these biofortified plants bring will overcome the conceptual reluctance to GMOs, especially in countries that appreciate the health value that these types of improved products give them. The need will make countries join the incorporation of GM and edited plant crops.

Daniel Norero is a science communications consultant and fellow at the Cornell Alliance for Science. He studied biochemistry at the Catholic University of Chile. Follow him on Twitter @DanielNorero