This article or excerpt is included in the GLP’s daily curated selection of ideologically diverse news, opinion and analysis of biotechnology innovation.
Part of my introduction to nutrition was reading books my mom picked up second-hand at rummage sales back in England. One that I remember really well, a beaten-up paperback with a lurid blue, red and yellow cover, was Eat Right to Live Longer, by Lelord Kordel. I remember how Polish-American Lelord seemed to exude old world Hollywood-style glamour in his cover photo (I just checked, and the book has a 1965 publication date). But even more striking to me were his exotically alien assertions that meat was the secret to long life, while starchy carbohydrates were quite the opposite—a fast pass to disease and early death. 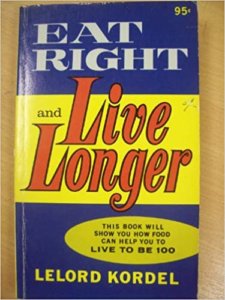 I was probably twelve or thirteen at the time, and impressionable. But given my mom baked a constant stream of delicious homemade bread and cakes, she obviously less so. I later found out that Kordel was imprisoned for conning the public with false health claims, so she was right to be skeptical.

Where I’m coming from with this is that low-carb diets are nothing new. However, time seems to have exaggerated the religiosity with which some low carbers—specifically the LCHF (low carb, high fat) camp—hold their views. Meanwhile, those who don’t believe carbs are bad, and claim that what matters most is eating less and moving more (dubbed the CICO or calories in, calories out crowd), are also not averse to mudslinging.

To witness the twists, turns and ferociousness of the arguments, just type “LCHF and CICO” into Twitter and dig into some threads (disclaimer: don’t blame me for the loss of half a day of your life.) If you want the fast-track version, this is it: extreme low carbers will inevitably revert to the position that anyone “pushing” carbs is a shill for Big Sugar, Big Food or even Big Pharma. At the same time the biggest names decrying CICO will themselves often have skin in the game—such as low-carb diet books, or keto and paleo ranges.

Low carbers push the carbohydrate-insulin model of obesity, which asserts that obesity is caused not by excess calories but by a diet heavy in carbohydrates driving up insulin in the body, causing metabolic disease and the body to hold on to fat. But though this model has some merits, it’s by no means proven and is the source of heated debate. 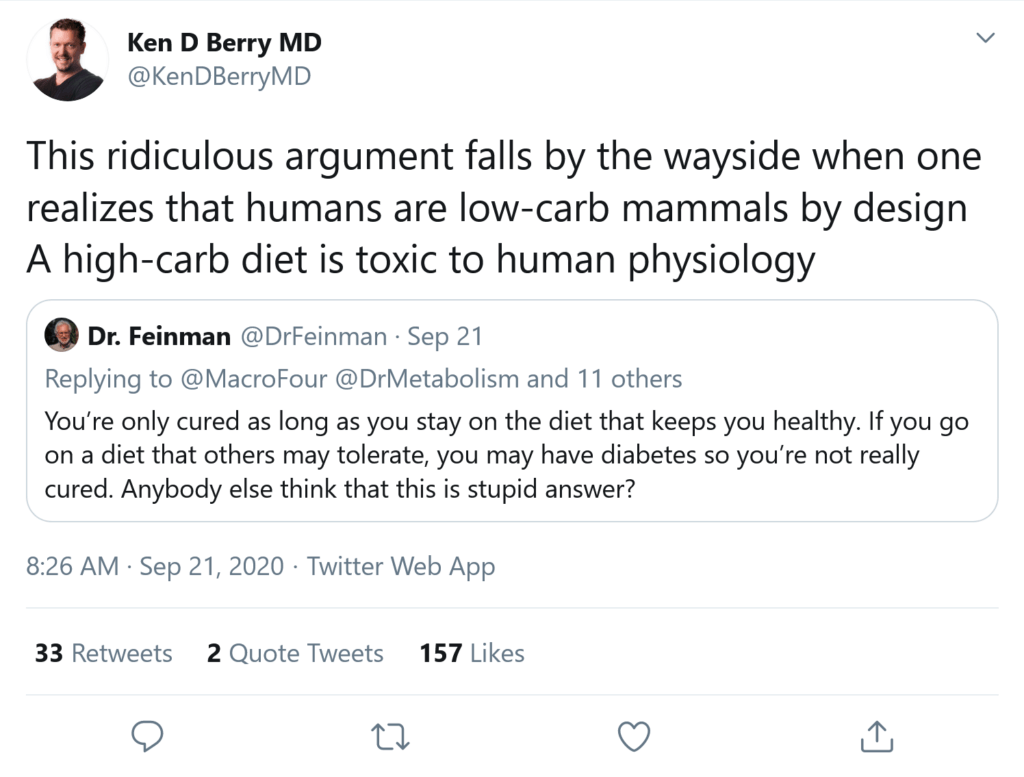 In a study run by National Institutes of Health researcher Kevin Hall, 17 overweight and obese men confined to a metabolic unit lost virtually equal amounts of fat on a high-carb or low-carb diet when, crucially, the protein and calorie contents of the diets were kept the same. In other words, this study suggested calories were more important to body fatness than macronutrient makeup of the diet.

Naturally, the results of the study were immediately rubbished, which is entirely in keeping with my point: depending on your inherent low-carb or CICO bias you’ll tend to “like” the results of some studies more than others. If you stand to lose your reputation and livelihood because you’ve committed to one position, you’ll dig in and defend your view even more. In a nutshell, carbs vs calories is more about dogma, politics and the need to be “right” than it is about the science, which at best is not very clear.

A happy medium for carbs?

In fact, observational studies often flip both ways. For example, the 2017 PURE study concluded that high levels of dietary carbohydrate were associated with more illness and earlier death, while another large epidemiological study a year later seemed to reach the opposite conclusion—i.e. that low-carb, high-fat diets are associated with shorter lifespans. 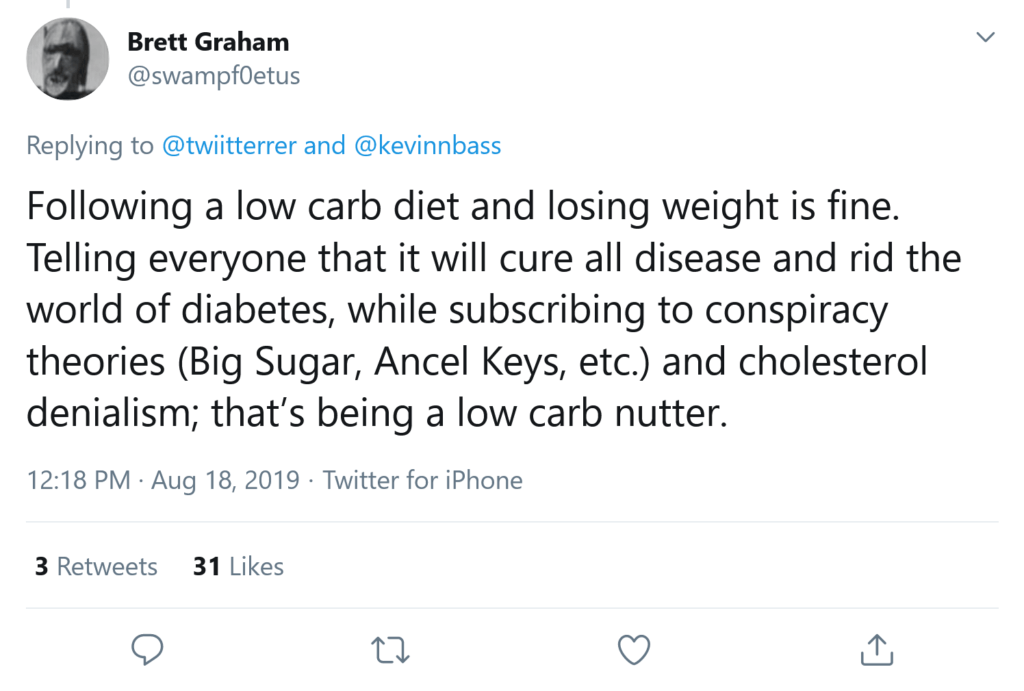 A further observational study of more than 15,400 people from the ARIC (Atherosclerosis Risk in Communities Study) found that diets both low (less than 40% energy) and high (more than 70% energy) in carbohydrates were linked with an increase in mortality, while moderate consumers of carbohydrates (50-55% of energy) had the lowest risk of mortality.

The ARIC findings must be treated cautiously, but they are interesting given most healthy eating guides from around the world—dismissed as out-of-date, unscientific and commercially driven by low carbers—suggest consuming carbohydrates at just this middling sort of level. In reality, all traditionally healthy diets, such as the Japanese and Mediterranean diets, provide around half of their calories from carbs.

Related article:  Can’t lose weight? You may be able to blame this 'cruel' metabolic mechanism

Diet quality may be key

For the record, high-quality carbohydrates in this research were whole grain cereals, fruits, and non-starchy vegetables—i.e. carbs that tend to be higher in fiber, more nutrient dense and less likely to precipitously raise blood sugar levels. Fats that were counted as high quality were those with a higher proportion of polyunsaturates from plant sources, and a lower proportion of saturates from animal sources (not the best news for keto-carnivores).

No properly qualified health or nutrition expert, even if firmly of the belief that calories count, disputes that too many sugars or highly refined carbs aren’t healthy. Indeed, there are a lot of sensible advocates of a lower-carb diet, but they won’t force it down your throat, or suggest that it’s the only way to eat. Nor will anyone rational ever say calories are completely worthless. Calories have imperfections, and some macronutrient combinations will satiate you better than others, but genuinely pushing the view that you can eat as many calories you like as long as you ditch sugar and carbs is a red flag. 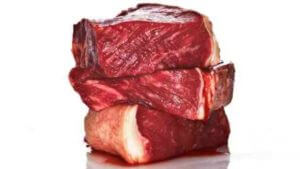 Low carbers’ accusations that “mainstream” dietitians and diabetologists are some amorphous collection of brainwashed high-carb-low-fat advocates is especially egregious. In fact, a reduced-carb diet has been a part of the mainstream dietetics armory for some time. Even the American Diabetes Association, not known for its nimble response to changes in scientific opinion, has for the last 15 years recommended that diets always be individualized for each person with diabetes. In 2019, the ADA changed its diet guidelines, removing the recommendation that individuals keep their carbohydrate intake above 130 grams per day and recognizing that “…. low carbohydrate eating plans may result in improved glycemia and have the potential to reduce antihyperglycemic medications for individuals with type 2 diabetes.”

One size doesn’t fit all

A lot of people benefit from a lower carb diet—that much is not in dispute. But while qualified dietitians and diabetologists recognize that a low-carb diet can have value, they generally realize it’s not the only approach, and that the complex realities of real people with obesity and diabetes might require different strategies.

By contrast, the message that low carbers shout from their Twitter soap box is that “it worked for me, so it must be right for you too.” This couldn’t be more arrogant or wrong, as evidence suggests that the glycemic response of two people to one food can be very different. In addition, the near-hypo blood sugar levels that some low carbers insist type 2 diabetics should maintain don’t just make people “hangry”—they could also be dangerous, for example, when driving.

The bottom line is that forcing the brand of dietary advice that worked for you onto other people might actually be harmful. Human bodies are not all the same, and for people already feeling vulnerable because they are living with obesity or diabetes, being made to feel a self-sabotaging failure because they can’t stick to a low-carb regimen is just cruel.

Thankfully as a teenager, I only had Lelord Kordel telling me carbs “can be killers.” Had it been the whole of low-carb Twitter, it might have meant a much more troubled relationship with food, and even worse, a face-off with my mother about her fruit cake.

Angela Dowden is a British award-winning health journalist and registered nutritionist with over 20 years of experience. Follow her on Twitter @DietWrite