This article or excerpt is included in the GLP’s daily curated selection of ideologically diverse news, opinion and analysis of biotechnology innovation.
Does greedy Monsanto sue small-time farmers for patent infringement because their fields are accidentally contaminated with the company’s GM seeds? Anti-GMO activists and gullible reporters have said so for two decades, but after examining four high-profile suits in this series, we’ve discovered that this narrative is clearly false. The defendants in these cases, without exception, utilized Monsanto’s GM seeds without paying for them, or tried to help others do so. One grower, Vernon Bowman, actually planted the company’s patented soybeans and told them about it.

[Editor’s note: This is part three of a three-part series. Read part one and two.]

In none of these cases, as court records confirm, did Monsanto target a farmer because of accidental pollination, nor did the biotech giant force anyone into costly settlements; the company either declined the compensation awarded by the court or asked the defendant to contribute the funds to scholarship programs for agriculture education. These key details undermine the allegation of legal mischief on Monsanto’s part, but there is one last case in which Monsanto was the defendant we should briefly analyze to put the issue to rest for good, because it was designed to do exactly that—but ended by blowing up in the plaintiff’s face.

In March 2011, the Organic Seed Growers and Trade Association (OSGATA) sued Monsanto specifically to stop the company from suing farmers whose farms were ‘contaminated’ by genetically engineered seeds. OSGATA wanted a declaratory judgment that would ensure Monsanto was not entitled to sue the plaintiffs for patent infringement. In court, Monsanto argued that it “never has and has committed it never will sue if our patented seed or traits are found in a farmer’s field as a result of inadvertent means.” 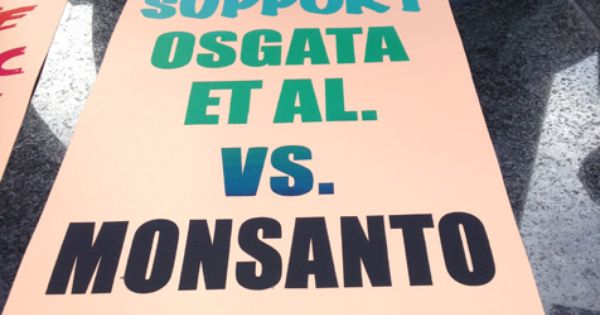 OSGATA lost at the district court level and the dismissal was upheld by the U.S. Court of Appeals for the Federal Circuit. The Supreme Court refused to hear the case.

Why did this case go nowhere? OSGATA was asked to produce evidence that a “justiciable controversy is present,” that is, evidence that Monsanto sues farmers due to inadvertent contamination. They were not able to do so. They sued the company to prevent Monsanto from doing something it hadn’t done and had committed not to do.

While OSGATA held up “Monsanto’s evident history of aggressive assertion of its transgenic seed patents against other growers and sellers (144 suits and 700 settlements)” as a reason for a declarative judgment, Monsanto pointed out that none of those cases involved the sort of accidental contamination that the plaintiffs wished to be held harmless, thus they “are therefore not similarly situated to those who have been sued.” So, the previous cases could not be used as the basis for a declaratory judgment going forward on accidental contamination cases.

Related article:  Pesticide hypocrisy? EU edges toward banning glyphosate after finding it safe but clears organic copper sulfate after finding it a 'public health and environment concern'
Follow the latest news and policy debates on agricultural biotech and biomedicine? Subscribe to our newsletter.
SIGN UP

Further, the court clarified that Monsanto’s assurances in this case that they would not sue on the basis of accidental contamination would have the force of law going forward. Under the concept of judicial estoppel, “It is well established that a party who successfully argues one position is estopped from later adopting a contrary position in a case involving the same patent.”

In another section, the court addressed OSGATA’s claims to be potentially harmed by the health risks of genetically engineered seeds and glyphosate. The opinion concluded:

The appellants also complain that they are harmed by, inter alia, exposure to the allegedly adverse health effects of genetically modified seeds and glyphosate; long term environmental impacts of genetically modified seeds; economic costs following from contamination of conventional crops by transgenic seeds and glyphosate; and the costs of anti-contamination precautions taken for purposes other than avoiding suit (i.e., to maintain organic certification). But as the appellants concede, “a declaratory judgment here would do nothing to eliminate the risk of transgenic seed contamination.”

Aside from the risk of suit by Monsanto, none of the alleged harms caused by contamination is traceable to Monsanto’s enforcement of its patents, they could not be remedied by a declaratory judgment, and they cannot serve as a basis for jurisdiction in this case.

In sum, Monsanto’s binding representations remove any risk of suit against the appellants as users or sellers of trace amounts (less than one percent) of modified seed. The appellants have alleged no concrete plans or activities to use or sell greater than trace amounts of modified seed, and accordingly fail to show any risk of suit on that basis. The appellants therefore lack an essential element of standing. The district court correctly concluded that it lacks Declaratory Judgment Act jurisdiction.

After a careful reading of the decision, and looking past the necessary niceties of legalese, one gets the very clear sense of a plaintiff being laughed out of court.