This article or excerpt is included in the GLP’s daily curated selection of ideologically diverse news, opinion and analysis of biotechnology innovation.
Nearly every sort of diet has appeared on the New York Times bestseller list by now, all claiming to have a foundation in science. Yet one key reason some among the public are distrustful of epidemiology statistics on masks and social distancing is that epidemiology is also used to statistically link nearly every food or chemical to harm or longevity.

While epidemiology may be science, what Harvard School of Public Health and the US National Institute of Environmental Health Science does with it is often the opposite. It’s instead how we have gotten claims that eating less bread will prevent Alzheimer’s, a chemical that can only kill plants causes human cancer and the nutritional equivalent of astrology, that your blood type determines if you get fat eating meat; The Blood Type Diet. Anyone with basic common sense knows it is crazy but WebMD dutifully carries articles about it anyway, so it is still pop medicine reading.

The “blood group’ diet was popularized by Peter D’Adamo in 1996. He calls himself “doctor” but he is actually a naturopath, the modern term for an herbal shaman, so only a doctor in the way that I can buy a PhD in Theoretical Phys Ed off the Internet and call myself Dr.

Despite it being goofy, the 1990s were the Golden Age of anti-science woo so we are still stuck with u-shaped curves for ‘endocrine disrupting chemicals’, virtual pollution causing virtual deaths with PM2.5, and crazy diets like this. He claimed your blood type determined what you should eat because observational studies had claimed differences in cardiovascular risk for different blood groups. Those two words are highlighted because they are confounders by themselves. Risk is one of the most abused words by epidemiologists today and observational papers are the truncheon they use to deal the damage. No conclusions or lifestyle guidance can be made scientifically from either, they can only create an exploratory idea that scientists would need to validate. Some correlation links developed such a wealth of data they have been validated – masks are good at preventing viral spread and cigarettes are good at causing cancer – while most, like that bacon is “linked” to cancer, are the nonsense that have made the public fatigued about health claims.

Using hand-picked papers of nothing but statistical correlation D’Adamo claimed that blood Type A can’t eat “toxic” red meat, type B can’t eat wheat, chicken, or pork, while Type O can eat lots of meat but no grain or dairy. Type AB is just a jumble of A and B but more description is a waste of your time because none of it has any basis in biology. A giant red flag for books trotting out new diets is when their only science is epidemiological correlation and mouse studies.

Yet with NYT Bestseller status and millions of books sold and people who’ve lost weight claiming this works, it needs to be debunked every few years. Not because it might be harmful but because it is scientific fraud. Anyone with any blood type who eats healthier and follows any of the diet recommendations for Type A,B,O, or AB will lose weight. Blood type is irrelevant, though.

A new study by vegan activists with the Physicians Committee for Responsible Medicine followed overweight participants for 16 weeks and then 68 were blood typed. Half of overall participants chosen were not asked to make any changes to diets (but since this was all self-reported, who knows.) As with any change to fewer calories, metabolism improved – likely more so because participants had declared themselves ‘health conscious’ and were selected by the authors and may have exercised more. More to the point, there were no differences in improvement based on blood type. People also lost weight, but blood type had nothing to do with it. Cholesterol decreased. So risk factors for risk factors declined. Blood Type O participants did not suffer health harm by eating less meat – they were probably just less happy. 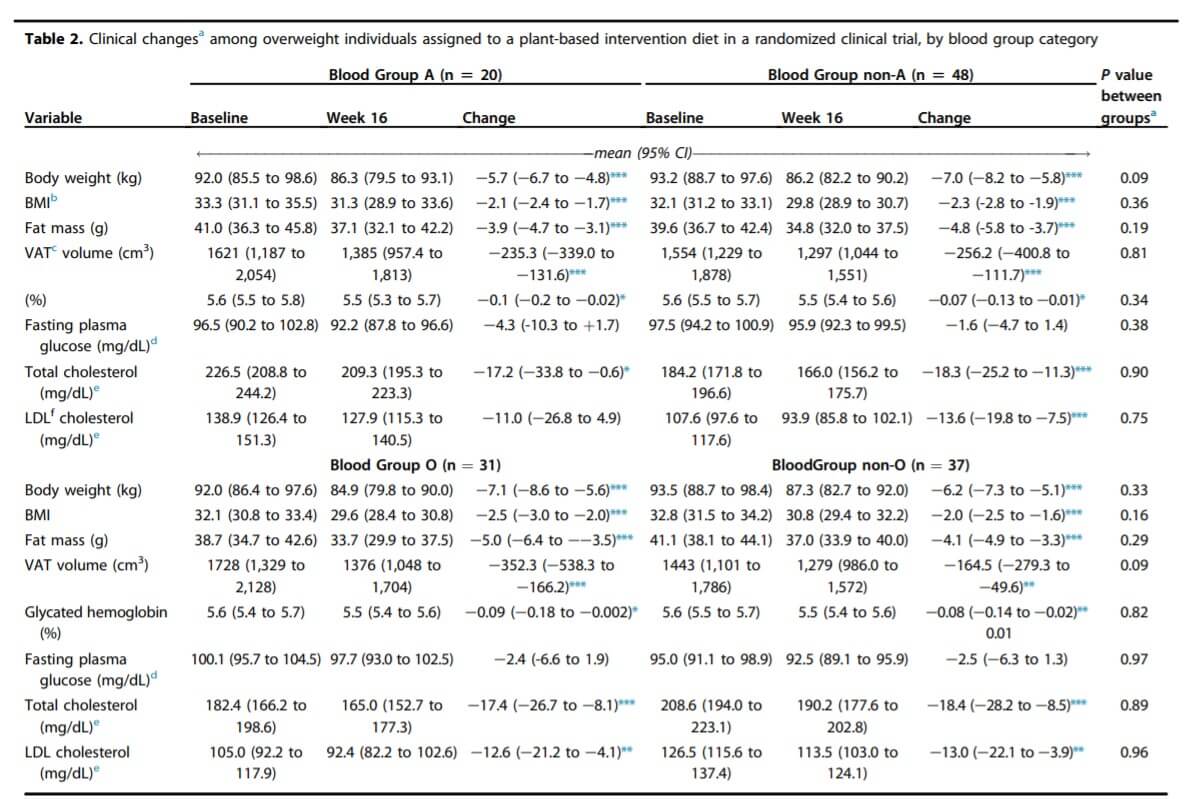 Blood Type Diet gurus will note the confounders – Physicians Committee for Responsible Medicine is an organization created to promote a vegan diet and they hand-picked participants, who were paid. The American Medical Association once called PCRM a “fringe organization” that uses “unethical tactics” and is “interested in perverting medical science.” The lead author of the new paper and founder of PCRM is an MD, but a psychiatrist who claimed that milk contains morphine and is as dangerous as smoking, all while driving a PETA-owned car to go to the PCRM office located inside PETA and for which PETA paid staff salaries. They basically want Type O blood people to be vegans also and therefore might hate this diet on ideological grounds.

Still, lots of organizations with sketchy pasts do fine work now (e.g. Planned Parenthood finally disavowing their racist eugenicist founder Margaret Sanger to get that monkey off their backs and focus on women’s health) so the paper has to be taken on its merits. And there is no problem there. It’s as sound as any paper using self-reported food claims can be – yes, use caution about cosmic conclusions based on what people claim they ate in all cases, but not because of the group behind it. The trial was registered, it met its IRB standard.

The goal of the paper may have been not to debunk the Blood Type Diet but rather to debunk just the parts that involve eggs and meat. And it did that, if they want to frame it that way. But it mostly just showed that any diet people stick with will help. The average weight loss was 13 lbs. and even when it comes to things like COVID-19, all the talk about outcome disparities by income or race ignore that obesity is often the common denominator. Obesity will soon overtake smoking as the leading lifestyle cause of early mortality. Don’t be obese and your risk factors for lots of things go down.

People being able to afford to be fat is obviously superior to people being so poor they starve and once the culture wars – claims that meat is bad, ‘junk’ food is addictive – are behind us, and we shuck off our biological legacy of eating too much because we ‘don’t know where our next meal will come from’, obesity is an entirely solvable problem. Until then, we are stuck with ridiculous diet books, and papers debunking them, when the only thing you need to know I can tell you here for free; consume fewer calories than you burn and you will lose weight. Guaranteed.