This article or excerpt is included in the GLP’s daily curated selection of ideologically diverse news, opinion and analysis of biotechnology innovation.
Genetically modified (GM) maize has produced higher yields than conventional hybrid varieties in South Africa, highlighting the technology’s potential to support food security in the face of climate challenges, a new study finds.

“Our study shows that the gains from biotechnology for white maize as a staple food crop in South Africa have been greater than for yellow maize for livestock feed,” said lead author Dr. Aaron Shew, an assistant professor of agricultural economics at Arkansas State University. “This could signal substantial potential to improve production of other staple crops in Africa with biotech tools.”

Shew noted that “the yield gains for white maize were about twice that of yellow maize, which suggests genetic modification may act as a ‘catch-up’ technology to more rapidly address production issues. We also found that the yield gains were similar in dryland production — not just irrigated — which may be important for climate resilience.” 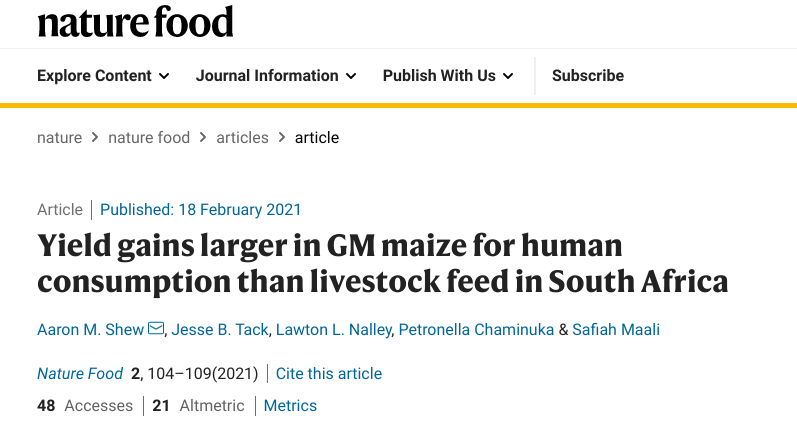 Researchers conducted the study to determine whether GM crops actually benefit consumers via increased yields in light of widespread skepticism about that assertion. White maize, which is predominantly a field-to-plate crop in South Africa, provided a medium for testing the potential impact of GM crops on the human food supply.

The study assessed yield differences between GM white maize, GM yellow maize and conventional hybrid (CH) maize over a 28-year period across 106 locations in South Africa. The data used in the study goes back to 1980. GM cultivars represented just 5 percent of the observations in 1999, when South Africa introduced insect-resistant Bt maize, but that figure progressively increased to 63 percent by 2009, suggesting widespread farmer adoption of the technology.

It tallied data from 491 cultivars and 49,335 dryland and 9,617 irrigated observations in the southern African country, which is considered a regional leader in commercial and mechanized farming. The data used in the study are believed to represent the most extensive field trials conducted on GM crops in the African continent.

Notable observations in the study include a yield increase in dryland GM maize, which is important because much of Africa’s agriculture depends on rainfall rather than irrigation. The yields for irrigated maize were more than 2 Mt per hectar higher than those achieved in dryland maize. GM white maize yield gains were approximately twice as large as those for yellow maize.

The study also found large differences in yields gains across the eight provinces studied, “which may suggest that genetic modification holds greater potential for intensifying production in marginal or small-holder production where lower potential for extensification exists.”

The study suggests that GM maize may improve climate change adaptation strategies, support producers in both high and low-production areas and bolster food security in the case of white maize consumption in South Africa.

The authors outlined some of the salient merits of GM crop technology, citing increased yields, reduced cost of production or a combination of the two as incentives for the producer.

“Empirical evidence further suggests that the producers who have benefited the most from genetic modification are in fact low-income farmers in developing countries where there are fewer options for pest management and crop vulnerability tends to be higher,” the authors wrote.

“As new biotech tools are developed, tested and approved, we hope these findings encourage education, policy support and economic access to biotech staple crops where producers need them most, in South Africa and more broadly in sub-Saharan Africa,” Shew said.

The authors anticipate that future research could focus on the difference in yields between GM and CH white maize grown on smallholder farms and the contribution of GM maize to farm-level economic and food security benefits.