By 2030, nearly half of Americans will be classified as obese: From gene manipulation to lifestyle changes, here are rays of hope

This article or excerpt is included in the GLP’s daily curated selection of ideologically diverse news, opinion and analysis of biotechnology innovation.
Now that COVID-19 is winding down, perhaps it’s time to go back to trying to do something about our country’s weight epidemic. Over one out of every three people in the U.S. is considered obese, and another one out of three is considered overweight. That makes us amongst the world’s most obese countries (36.2%), according to the Organisation for Economic Co-operation and Development (OECD), as well as the OECD’s most obese member.

Like many public health problems, we are a heterogeneous nation as to how we approach weight. Besides the almost useless “help” from the federal government in terms of food labels (now featuring calories in bold lettering) and USDA’s MyPlate, there are four ways we approach the problem: shame, blame, dieting, or acceptance.

It doesn’t help to blame the people who make our food. Like every single product or service in this country, if they wish to remain in business, food manufacturers must provide foods that people want to buy. They can make healthy or unhealthy foods, but consumers ultimately decide what they will eat. Mars used to make Kudos Granola Bars, but consumers decided they no longer wanted them.

It is widely understood that trying to shame people concerning their weight doesn’t work; in fact, it may make matters worse. Research has shown that it causes depression and often causes people to gain even more weight. Shame could also lead to an unhealthy relationship with food and exercise. A person could lose excessive weight but still be very unhealthy both mentally and physically from excessive food restriction, disordered eating, and excessive, compulsive exercise.

Then there is dieting. About 17 percent of Americans are on a diet either for weight or other health-related conditions. In addition, Americans are spending $72 billion on weight loss programs and products. It isn’t working for most people, and 90 percent of our health expenditures are for people with one or more chronic diseases. Changing diet habits permanently can work, as it did in an extreme example with one of PT Barnum’s circus “fat ladies.” Celeste Geyer, a.k.a. “Dolly Dimples,” was not quite 5 feet tall and once weighed 588 pounds and consumed 10,000 calories a day. After nearly dying from a heart attack, she dieted strictly down to a healthy weight, which she maintained for the rest of her life. 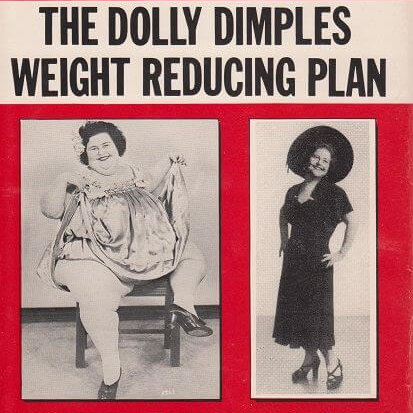 But lifelong changes are extremely difficult for most of us to make, and that has led to the fourth approach: acceptance. Some now see fat acceptance as a “social justice movement aiming to make body culture more inclusive and diverse, in all its forms.” The movement aims to garner acceptance for those with plus-sized bodies. Yet, “The risk of mortality has been shown to increase as body mass index (BMI) increases for all ages and for all categories of death.” It is the second leading cause of preventable deaths (over 300,000 per year) in the U.S. and is related to more than 60 diseases. It also affects minorities to a much greater extent than others.

The number one cause of preventive deaths is cigarettes, but there seems to be no social justice movement to accept smokers. Interestingly, a recent UCLA study found that social shaming of cigarette smokers obtains the exact same result as fat shaming, and people tend to light up more.

That leaves acceptance. But what if there were other ways beyond radical lifestyle changes to lose weight?

For those who are not looking for acceptance, but who have struggled to find the right diet, science and engineering may have the answer. First, Harvard scientists have been using the clustered regularly interspaced short palindromic repeats, or CRISPR, to engineer white fat cells to have the same properties as brown fat cells. The new brown fat-like fat cells burn calories more efficiently to help combat obesity and other metabolic issues. Other CRISPR researchers have applied the technology to make you feel full faster so that you don’t want to eat as much.

Other innovations include wearable health trackers like Lumen to track metabolism and the Nutronics skin patch. Both monitor biomarkers that direct a personalized diet resulting in reduced weight and help prevent diabetes and heart diseases and other chronic diseases.

No doubt there are many more advances in science and consumer products on the horizon. Just as we haven’t given up on finding ways to end cigarette smoking, we shouldn’t give up on finding healthy and sound ways to fight obesity. Right now, a Harvard study has projected that, by 2030, nearly half of us will be obese. That’s a projection, but it doesn’t have to turn out that way.