Across social media they celebrated. The electronic victory laps commemorated Bayer’s decision to remove the herbicide Roundup from the residential consumer market. In an unrelated decision, the Mexican courts upheld a presidential mandate to discontinue the use of genetically engineered (GE/GMO) corn seeds and their associated herbicides.

But are these events true victories for activists or short-sighted actions that will actually work against the interests they publicly espouse? It may be a classic example eventually regretting what you wish for.

Bayer acquired a large portion of the seed giant Monsanto in 2018. The merger brought a substantial research and development pipeline, but also the albatross of Roundup, the glyphosate-based herbicide that has become a controversy around claims that it caused cancer. A lawsuit recruited a massive litigation class with more than 100,000 plantiffs. Jury decisions ran contrary to a scientific consensus and the conclusions of international regulators (20 internationally-recognized independent agencies have reviewed the safety of glyphosate) that do not conclude there is a cancer connection. For decades, glyphosate-based herbicides have been considered safe with very low acute and chronic toxicity.

The Bayer decision would remove the glyphosate-based herbicide sold under the Roundup brand from the consumer market. In a recent statement, the company noted that removing Roundup was not due to any risk of cancer, it was solely a business decision to halt endless litigation.

The online reaction from anti-GMO and anti-pesticide organizations was beyond jubilant. The decision was widely characterized as a victory — this coming from the same advocacy groups that have promoted the false narrative that one of the safest and most effective chemicals in the history of agriculture is a ‘proven carcinogen’. 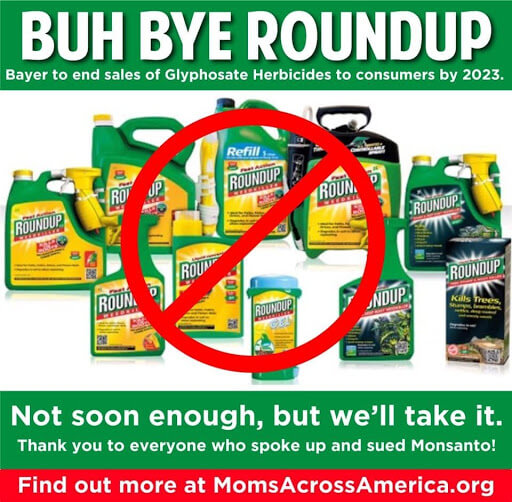 Removal of the product from the market was framed by environmental advocacy groups as an admission of guilt by supporters of agricultural biotechnology. Andrew Kimbrell of the Center for Food Safety celebrated in a news release picked up by almost every anti-GMO site on the web and many  in the mainstream media as well:

Bayer’s decision to end U.S. residential sale of Roundup is a historic victory for public health and the environment… It’s time for EPA to act and ban glyphosate for all uses. 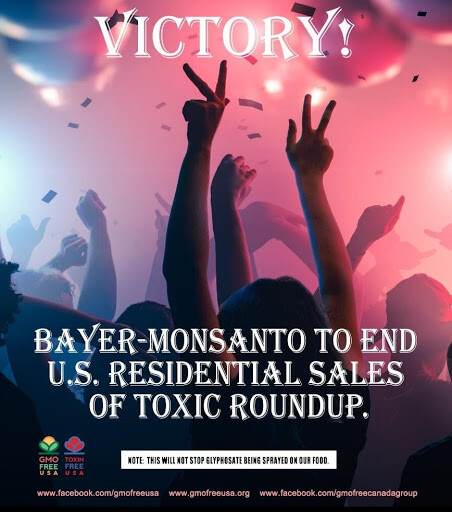 What does the science say on glyphosate?

The settlement with past litigants specifically stated that the plaintiffs accepted the finding that there was no causal association between the herbicide and cancer, specifically non-Hodgkin’s Lymphoma. There was no admission, and there should not be any presumptions based on the evidence. The company paid a settlement to end an elaborate fleecing, an emotional extortion campaign to cash in on lawyer’s artful at beating the financial piñata they helped hang.

But juries and judges do not decide if a compound causes cancer. Such determinations are determined from a confluence of animal studies, epidemiological assessments, and careful identification of the precise molecular mechanisms that connect chemicals to cancers. Since its first registration with the EPA in 1974, glyphosate has been carefully scrutinized by dozens of international regulatory bodies and independent academic scientists (as well as the myriad of companies that sell it).

The compound has been re-evaluated on a regular, rolling basis to fold new data into the analysis. The conclusion representing the regulatory consensus was concisely summarized by Health Canada in 2019,vafter a transparent and rigorous independent re-evaluation of all of the world’s studies:

No pesticide regulatory authority in the world currently considers glyphosate to be a cancer risk to humans at the levels at which humans are currently exposed.

Only one assessment varies from the regulatory consensus. In 2015 the International Agency for Research on Cancer (IARC) reclassified glyphosate as a “probable carcinogen” based on a number of in vitro studies, questionable animal studies, and suggestive select pieces of epidemiological data. However, the agency’s conclusion has been hotly debated, as it is a projected hazard-based assessment, meaning it is not based on actual risk to humans: exposure dosages actually experienced in real-world application. The IARC assessment also failed to consider the longest, largest and most meaningful assessment, which showed no association between glyphosate and non-Hodgkin’s Lymphoma.

Just last month, the Committee for Risk Assessment at European Commission released the 19th major review of glyphosate, addressing the contrary IARC finding and re-reviewing all of the available independent evidence, concluding:

RAC concludes that based on the epidemiological data as well as the data from long- term studies in rats and mice, taking a weight of evidence approach, no classification for carcinogenicity is warranted.

What’s the real impact of the removal?

What would a world without the residential use of Roundup look like? Glyphosate has been off patent for decades, and shrewd consumers didn’t buy the expensive name-brand Roundup product in the first place. Dozens of companies, mostly in China, produce generic equivalents that are available in potent concentrates for a fraction of the price. Roundup will remain on the agricultural market, so farmers will still have access to the name-brand product to complement the associated seed technology. Roundup use on crops is not going away.

Removal of glyphosate-based Roundup from the residential market will have two effects. Bayer will replace glyphosate with an alternative chemistry, potentially under the recognized Roundup brand name. It is likely that the replacement will either have higher toxicity and/or not work as well.

Savvy consumers will gravitate to the generic glyphosate equivalents, buy the concentrates, dilute their own, and continue safe and effective residential use. Unfortunately, with a lower cost, a concentrate, self-mixing and the consumer attitude of “if a little works, a little more will be better” glyphosate use will likely increase in the residential theater.

While Bayer is removing a glyphosate-based herbicide from the residential market, other restrictions are being handed down in the form of government mandates. Again, these are short-sighted decisions that will have lasting negative impacts.

Last New Year’s Eve, corks were popping, but not for the usual reasons. Mexican President Andrés Manuel López Obrador issued a decree to end the use of GE seeds, the associated use of glyphosate-based herbicides, and importation of GE corn by 2024. Those opposed to the technology saw this unilateral mandate as substantial victory in their bid to ban GE technologies in agriculture, and Mexico was viewed as another slowly falling domino. A reason to celebrate, from some in social media. 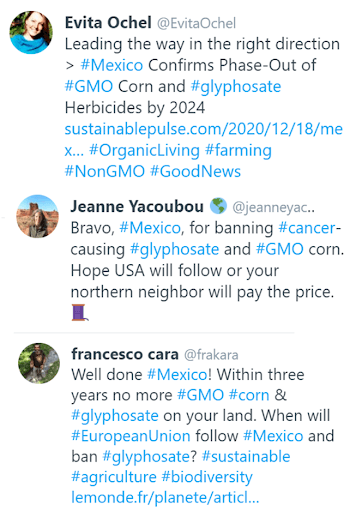 Farm groups have pushed back, suggesting that Mexico’s ruling violates farmer choice and freedom to operate. The US, even the Biden Administration, views the move as counter to the spirit of NAFTA (and its successor USMCA), which basically allows unfettered agricultural trade across the U.S./Mexico border, as 30% of corn used in Mexican animal feed and industry comes from the US.

While it is commendable that President Obrador would want policy to promote Mexican self-sufficiency, the top-down approach is not how it will be best achieved. Farmers choose genetically engineered seeds because they provide efficiencies that limit the need for labor, fuel and other costs, and reduce the overall toxic load of pesticides, including herbicides. For example, cotton, corn and eggplant containing the “Bt” trait are protected against insect pests, limiting the need for massive chemical controls. That saves money and poses less risk to the health of applicants, often women in children in the poorer countries that use this technology. The GE traits can increase yields and limit environmental impact on the farm. Losing access to elite genetic lines will likely impose economic, environmental and health impacts.

Farmers will still likely purchase seeds from the same seed giants. The same companies sell elite non-GE hybrids, as they have been selectively bred for high yields and disease resistance without the lab-added traits. Farmers will need to apply more chemical pest control to reduce damage from ear-boring insect larvae that destroy the crop.

For weed control, farmers eventually, likely, will have to switch from glyphosate to alternative herbicides, such as atrazine, a compound with significantly higher risk to workers and environment. Farmers will use more mechanical cultivation, increasing carbon output from fuel and soil, and potentially leading to a loss of valuable topsoil.

Ironically, Mexican farmers will lose seed sovereignty, as limits imposed by activists through Mexico’s presidential decree would directly affect their access to the newest seed technology.  A common internet trope tells us that the seed companies dictate what seeds farmers can buy. In Mexico it will be ideological political mandates.

Mexican farmers will have to fill the gap left from losing American seed imports, and do so with less efficient genetics and more reliance on chemistry. They will produce more carbon emissions, lose more top soil, and ultimately experience lower yields, requiring expansion of agricultural production into natural areas. Consumers may also face higher prices.

Be careful what you wish for

What are claimed to be efforts to aid farmers, consumers, and the environment are actually agenda-laden efforts to abrogate farmer choice and attenuate multinational seed company influence. They also show the true intent of advocacy groups is not to help farmers or protect the environment; it is about punishing the splintered off residues of a defunct corporation, poking the corpse of Monsanto.

While Bayer pulls a consumer product from the market and Mexico’s President restricts farmer choice, the underlying science hasn’t changed.  Technologies to safely control weeds and improve crop yields are necessary tools for economic and environmental sustainability. With restrictions on the availability of the products they wish to use, Mexican farmers and American homeowners will be forced into less sustainable and less effective choices. That pendulum will be slow to swing back the other way.

Be careful what you wish for.

Kevin M. Folta is a Professor, communications consultant, and hosts the weekly Talking Biotech Podcast. His opinions do not represent positions of his employer.