The Bioscience Resource Project (BSR), is an Ithaca, New York-based nonprofit founded in 2006 by Allison Wilson and her husband, virologist Jonathan Latham. It promotes its anti-GMO activities primarily via their website, Independent Science News for Food and Agriculture. They have ties to anti-biotechnology activist groups in the US, Canada and Europe that promote the claims of French geneticist Gilles-Éric Séralini, whose research contending that GMOs and the herbicide glyphosate pose health hazards has been challenged by mainstream scientists. 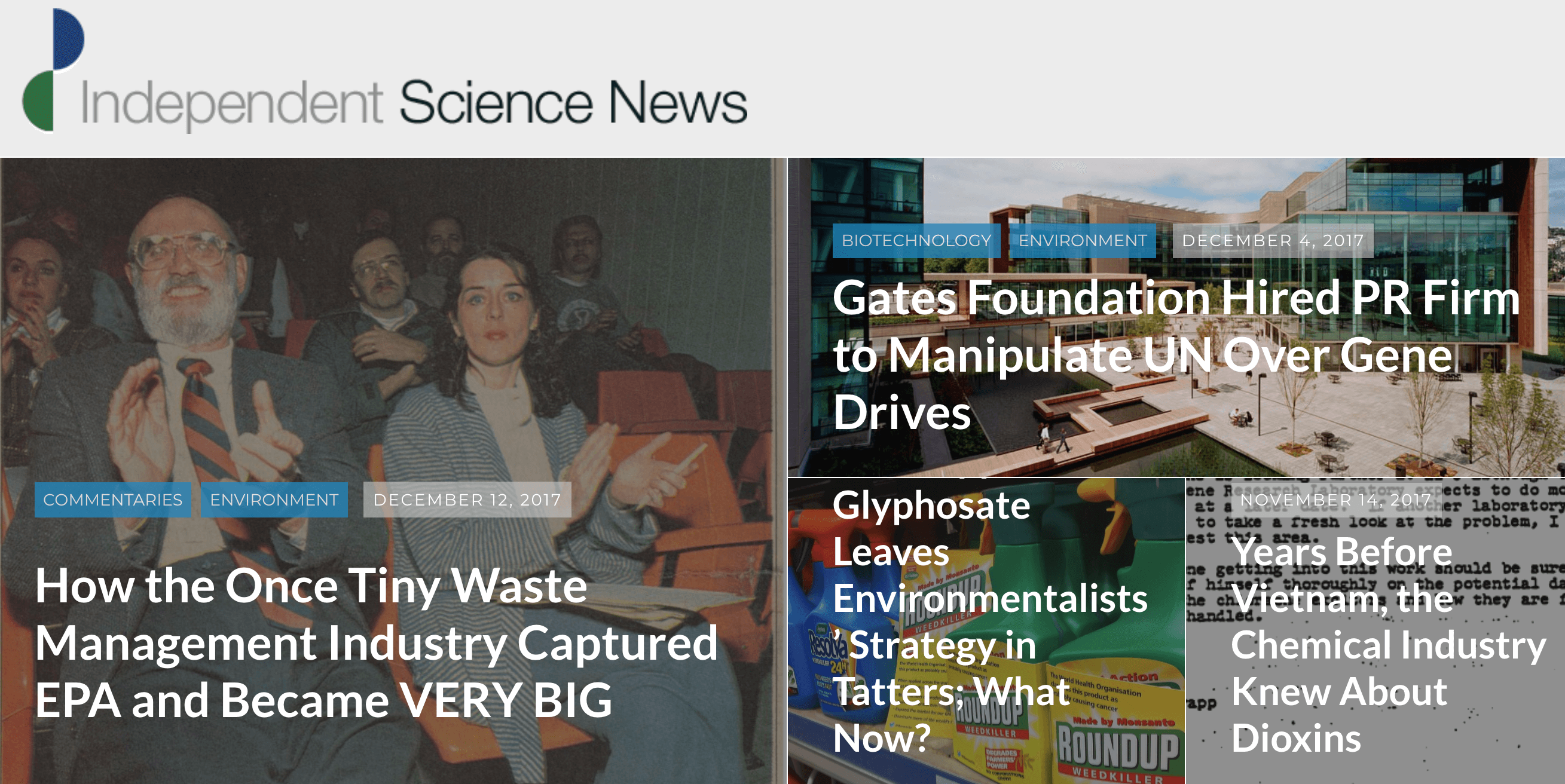 In 2006, Wilson and Latham co-founded BSR, claiming its purpose was “to conduct independent scientific analysis of genetic engineering and its risks.” In 2008 with a reported $40,000 donation from an undisclosed source they enlarged the project to include other aspects of the science of food and agriculture and their impacts on health and the environment to include criticisms of pesticides and other non-organic production tools.

They created the website, they said, to “serve as a hub where ‘independent-minded scientists’ could publish timely comment and analysis.” The website also included links to “eye-opening and classic scientific articles” and the websites of other public interest organizations that are opposed to crop biotechnology. Their stated goal was to create a strong scientific foundation for healthy, just and ecologically sound food and agricultural systems.

In 2008, the Bioscience Resource Project became a 501(c)(3) educational non-profit. In 2011, the Independent Science News website was launched and in 2012 the Bioscience Resource Project website was redesigned to provide additional resources and to include news on all aspects of the Project’s work. The project claims that “to produce its high-quality scientific research and resources, it relies on its volunteer board, its volunteer staff and its connections with public interest scientists and non-profits around the world.”

In 2013, Latham and Wilson, writing for alternative health promotion and conspiracy site GreenMedInfo, claimed scientists, industry and government colluded to keep the public in the dark about the dangers of agricultural genetic research. Latham claimed, “Genetics has become the go-to science of polluters and governments disinclined to address politically challenging social and environmental issues.” They said their research exposing these conspiracies resulted in a “massive” denial of service attack on their website they attribute to government and industry sources.

Latham and Wilson have similarly published claims that corporations were engaged in greenwashing to dupe conservation groups like the World Wildlife Fund, Conservation International and the Nature Conservancy to support industrial food production over organic.

In concert with the Center for Food Safety, Wilson and Latham filed an Amicus brief opposing a lawsuit challenging Vermont’s mandatory labeling law with other anti-GMO activists including: Jack Heinemann, David Schubert, Ray Seidler, et al. In 2015 they hosted a event with Steven Druker to promote his book “Altered Genes, Twisted Truth” alleging and FDA conspiracy and coverup over the approvals of GMO crops. In February 2016 Wilson and Latham co-hosted a viewing of the Movie GMO-OMG providing food and a Q&A session to attendees.

In 2017 Latham in collaboration with the Center for Media and Democracy released the “Poison Papers” with Carol Van Strum and Mary Bottari alleging a conspiracy between the chemical industry and government regulators to keep health and environment risking chemicals and pesticides on the market.

This news site was started in 2011 by the Bioscience Resource Project. According to the organization’s website:

Powerful interests routinely succeed in influencing the answers. In science, external forces influence strongly what is studied, what is published, and what is reported. When that happens, individuals (or policymakers) no longer have the information to decide rationally and choose thoughtfully. Society becomes dysfunctional at a fundamental level.

At ISN we chooses (sic) our stories carefully. Most concern simultaneous manipulations of the scientific process, the food/ag system, and the science media.

According to the site, these stories include:

At best, the headlines and stories under them are misleading, at worst, they are simply false, writes Andrew Porterfield for the Genetic Literacy Project:

The website has posted stories arguing there is no scientific consensus on the safety GM foods (there is a consensus, actually), a guest post by well-known GM food opponent Vandana Shiva, and conspiracy theories about genetic testing and population mass surveillance by the government. It also has been linked by anti-technology intellectual Naomi Oreskes, who linked one of her Tweets to the website’s article on Monsanto, a piece by Latham speculating that GM food (and therefore Monsanto and others who make them) were in peril because Chipotle had vowed to remove GMO products from its restaurants.

Latham is the co-founder and Executive Director of the Bioscience Resource Project; Editor of its “Independent Science News” website. Latham lists no other employment or positions; however, BSR tax returns show him receiving no compensation for his time or role.

He is an ardent anti-GMO, anti-corporate advocate who supports Food Babe Vani Hari and has criticized the New York Times for not delving deep enough into claims of industry bias and conflicts of interest.

He signed an open letter in support of EU state bans of GMOs with the usual list of anti-GMO EU research activists linked to ENSSER and other groups. He also signed on to briefs in support of litigation against GMOs and in favor of mandatory state labeling initiatives in the United States.

Latham has endorsed Chipotle’s GMO-free marketing claims and contends such actions will be the eventual undoing of GMO companies like Monsanto.

“I now believe, as a much more experienced scientist, that GMO crops still run far ahead of our understanding of their risks. In broad outline, the reasons for this belief are quite simple,” Latham has said. “I have become much more appreciative of the complexity of biological organisms and their capacity for benefits and harms. As a scientist I have become much more humble about the capacity of science to do more than scratch the surface in its understanding of the deep complexity and diversity of the natural world. To paraphrase a cliché, I more and more appreciate that as scientists we understand less and less.”

BSR is a registered 501c3 tax exempt NGO listing its address in Ithaca, NY. However, there are no (required) business filings for any Bioscience Resource named entity with the New York Secretary of State. Donations are solicited via PayPal and direct mail to their Ithaca address. While not filing returns since 2012, BSR remains listed as an eligible 501c3 organization with the IRS.

BSR claims it “accepts no commercial advertising and no corporate funding of any kind. Neither do we accept money from private foundations. The project accepts funding only from individuals and Community Foundations…”

The Encyclopedia of American Loons writes:

Jonathan Latham and Allison Wilson run The Bioscience Resource Project, a “public interest organization that has provided independent research and analysis in the agriculture-related biosciences since 2006.” Their website, Independent Science News, provides “news and critical comment on topics where food, agriculture, and biotechnology impact human health and the environment.” That sounds OK, thus far. Unfortunately, Latham and Wilson – although both have research backgrounds – are notorious crackpots, which should be suggested already by the “Independent” inflection in the name of their outlet… In fact, Latham and Wilson are something close to DNA denialists – that is, they reject the idea that genes can be the common causes of illnesses and disease; that is: genes play no role whatsoever, not only smaller role than expected. In short, Latham and Wilson call for a paradigm shift. Their contentions have of course been rejected by most people familiar with the topics, but moreover, their arguments contain such cherry-picking and deliberate distortion of the existing literature that it is hard to avoid drawing a parallel to the Intelligent Design movement…