Jon Foley began his essay on GMOs with some doubts.

The director of the Institute on the Environment at the University of Minnesota launched his article for the environmentally focused website Ensia in this way: “Against my better judgment, I’m dipping my toe into the genetically modified organism debate.” The backlash to his writing was swift and strong. One might wonder if these reactions were just what he was worried about.

Foley’s essay, titled “GMO’s, Silver Bullets and the Trap of Reductionist Thinking,” focuses on what he believes are the hyped promises and disappointments of GMOs.

“From where I sit, the biggest problem associated with GMOs isn’t the technology per se; it’s how they’ve been deployed. Despite early promises, as GMOs move from lab into the real world, they end up being very disappointing,” he writes.

He offers three main arguments against the current state of genetically modified crops. As they stand now, he says they have done little to enhance food security, because the crops in use today are not the sort that feed the poor.  GMOs have not increased yields. And they have not lived up to their promise of decreased chemical use in the fields.

For Foley, these alleged flaws signify “that GMOs have frequently failed to live up to their potential, not because they are inherently flawed, but because they have been deployed poorly into the complex social and environmental contexts of the real world. And I worry that GMOs are sometimes the victims of reductionist thinking, where the focus is on technology and business models, and less on the social and environmental impacts they may cause.”

Foley’s article touched off a firestorm of responses, including a fascinating discussion on Biology Fortfied. Keith Kloor, who often writes about biotechnology for Discover, found Foley’s argument on food security narrow and reductionist itself.

Feeding the world’s poor, as Foley knows, also requires improving their livelihoods. It’s about lifting their incomes, helping them break the vicious cycle of poverty. There’s much that goes into that economic development equation but in Africa and other areas of the developing world, the role of commodity crops as an income generator for small farmers is crucial.

It’s important to look at the overall view of this new technology, Kloor writes. “Sometimes the value of a scientific enterprise is not appreciated until years down the road. Have GMOs lived up to the hype of their most exuberant advocates? No. Does any new technology?” he asks.

Ramz Naam, author of the well-received book on sustainability The Infinite Resource: The Power of Ideas on a Finite Planet, also found fault with much of Foley’s reasoning. Many of the issues with GMOs could be blamed on regulation, he wrote. “One of the reasons that GM crops haven’t done more to boost food security around the world is that non-scientific bans have blocked them from doing so.”

Foley’s argument that GMOs are not living up to their promise of increased yield was a particular flash point. It’s important to note that increased yield has not been the focus or goal of the plants that are grown today. But “there are situations where GMO traits have contributed to major yield increases,” notes Andrew Kniss, a professor Weed Biology and Ecology at the University of Wyoming, on his website Weed Control Freaks. Sugarbeets and cotton are two examples: 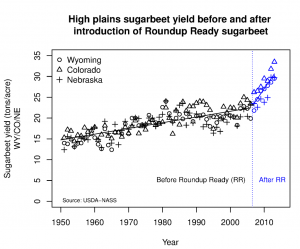 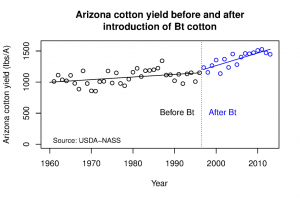 “The fact that Bt crops produce such huge yield gains in the developing world is largely a happy accident. Yield was never the primary goal,” writes Naam.

Recently, a team of Chinese and French scientists reported in the journal Nature that widespread planting of Bt cotton in China drastically reduced the spraying of synthetic chemicals, increased the abundance of beneficial organisms on farms, and decreased populations of crop-damaging insects. Planting of Bt cotton also reduced pesticide poisonings of farmers and their families. In Arizona farmers who plant Bt cotton spray half as much insecticide as do neighbors growing conventional cotton. The Bt farms also have greater biodiversity.

Foley finishes his essay by calling for a holistic thinking and interdisciplinary research for GMOs. Perhaps step one should be getting these writers in a room together.