In biotech, no one is afraid of the big, bad wolf (spider)

Psychologists can’t tell us much about fear of spiders – other than what we all know, that is it innate or learned and individual – but spiders and psychiatric hospitals have had just enough scary Halloween movies made about them that the precautionary principle kicks in and they assume the worst.

University of Cincinnati professor George Uetz studies how the environment influences the evolution of behavior through researching animal behavior and ecology, in particular wolf spiders and colonial web-building spiders and how these spiders communicate using different sensory modes: visual, vibratory and chemical. Some of the observed characteristics include moisture in the environment, the light spectrum and the structure of substrate. 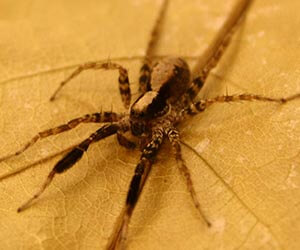 “In the case of the wolf spiders I work on,” Uetz said, “they are very abundant in deciduous forests and are an important component of the forest floor in local woods.”

Another type of wolf spider was recently found in Adams County at a nature preserve run by the Cincinnati Museum Center and the Nature Conservancy. The Hogna carolinensis, or the Carolina wolf spider, is the biggest wolf spider in America and had not been seen in Ohio for more than 60 years. Because the two types of spiders occur in the same area, it is likely that the Carolina wolf spider would prey upon the smaller Schizocosa ocreata.

In science, spiders are friends and understanding the natural world can help us achieve advances in areas like biotechnology, human health and medicine, environmental quality and conservation of natural resources, agriculture and forestry. For example, there is spider silk that is stronger than steel and spider venom that is used in the pharmaceutical industry. Additionally, there are spiders used as a biological control of pests in agricultural crops as well as spider-inspired biomimetic robotics.