Moving around and fooling around: Tracking early human matings

Procreating with other species: Birds do it. Bees do it. Even bears do it. But did humans ever do it?

In nature there is a plethora of examples of this happening. Recent analyses have found that all across the eastern United States, coyotes and wolves have been crossing species barriers to make viable offspring. Polar bears and grizzly bears are doing it too, in northwestern Canada too.

In describing the ‘pizzly bear’ (or grolar bear if you like), Brendan Kelly, chief scientist and director of conservation research at the Monterey Bay Aquarium, told the Pacific Standard:

[Darwin] was, and rightfully so, focused on the creation of new species, but sometimes after a period of separation, species that were beginning to diverge come back together and fuse and return to being one species.

Speaking of Darwin, many of the finches in the Galapagos he famously described are the product of interbreeding too. As are many primates, such as baboons and gibbons. According to Rebecca Ackermann, an archaeologist at the University of Cape Town in South Africa, “seven to 10% of all primate species hybridize, which is common considering a lot don’t ever come into contact with each other.”

Interbreeding is a very common event in nature but have humans ever partaken in it? Modern claims of a successful mating between a human with a chimpanzee have been debunked, but it turns out Homo sapiens haven’t always kept it within our species. In the last five years, DNA analyses of ancient remains have found evidence of significant interbreeding between humans and our ancient relatives written into our genomes. And the result of these events has made a lasting impression on humans today.

According to most fossil and DNA evidence, modern humans first appeared in Africa at some time between 200,000 and 100,000 years ago, with members of one branch leaving the continent about 60,000-70,000 years ago (although this has been contested by some recent findings). When they emerged they came into contact with several similar hominids like Homo errectus and Neanderthals and how they interacted with these organisms has been the subject of much debate.

In 2010, the first bit of evidence that these extinct species had interbreed with Homo Sapiens came when scientists first sequenced the genome of a Neanderthal. This landmark study, a result of an international project called the Neanderthal Genome Project, revealed that at some point 80,000 to 50,000 years ago Neanderthals and humans had indeed mated. According to the initial study this left a mark on modern humans: approximately 4 percent of the DNA of non-Africans living today coming from Neanderthals. This number has been confirmed several times including ina February 2016 study in Science performed by a large team of American scientists.

But it’s not just Neanderthals; genetic analysis says that an ancient species of humans called Denisovans mated with early Homo sapiens too. Currently, very little is known about this early species because to date just three fossils have ever been found: two teeth and one finger. But despite this dearth of physical evidence, DNA evidence has revealed quite a bit about their impact and interactions on humans.

Denisovans, who are named for the cave in Siberia where the fossils were discovered, are distinct from Neanderthals and Homo sapiens. They were a genetically diverse species, exhibiting about as much diversity as modern Europeans, and were much more diverse than Neanderthals. A recent analysis showed that like Neanderthals, Denisovans left a significant mark on the DNA of modern humans. But unlike the Neanderthals, Denisovan’s DNA only appear to be present in one population: Melanesians. 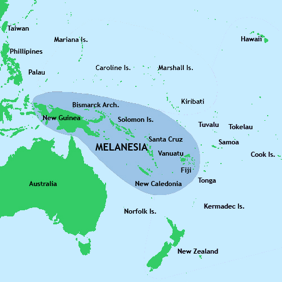 Melanesians are a cultural group that occupy the Oceanic island countries of Vanuatu, Solomon Islands, Fiji, and Papua New Guinea, as well as New Caledonia, West Papua and the Maluku Islands. Modern Melanesians have roughly 4 percent of their DNA from Denisovans, and have 2-3 percent of their DNA from Neanderthals. What is particularly interesting is the incredible distance between where Denisovan bones were found, Sibera, and the area where modern Melanesians are found today, Oceania. This means that in just 40,000 years, Denisovan DNA traveled over 2,000 miles.

Related article:  My garden is organic and I grow GMOs

Not too long ago, the field of ancient DNA was bogged down by serious limitations, in particular worries about contamination from modern DNA. But the last few years have seen a dramatic increase in the reliability of data, primarily because of giant leaps forward in technology, like next generation sequencing. This, along with an increasing genetic database of sequences of both modern and ancient humans, have allowed researchers to go beyond looking for the presence of genes, and begin learning the story of their presence.

Denisovan DNA is found in genes which are involved with blood sugar levels, fat metabolism and the immune system. Interbreeding with Neanderthal’s has also affected genes involved with the immune system, and in particular the HLA family of genes that are important in tissue-matching for organ donation. Science writer Ricki Lewis, at DNA Science told PLoS Biology that the absence of extinct human’s DNA in some specific regions of modern human’s genome raises interesting questions:

Even more intriguing is that an 11 million DNA base stretch on chromosome 7 devoid of archaic sequences harbors the FOXP2 gene associated with our ability to speak and use language, and also contains genes whose variants have been associated with autism.

Commenting to GLP sister site, Genetic Expert News Service (GENeS) about the February 2016 study in Science on the Neanderthal genome, Rasmus Nielsen, a professor in the department of integrative biology at University of California, Berkeley, explained that if the genetic impact of these ancient species is detectable, it is probable doing something:

If 2-3% of your DNA is from Neanderthals, 2-3% of the genetic variation explaining your phenotypes you would also expect to come from Neanderthals. So this study is not particularly surprising. It would be very odd if we had all this Neanderthal DNA and it didn’t, on average, have some effect on observable traits.

So what are those effects? This study analyzed genetic records of 28,000 Americans of European descent and compared them to known Neanderthal sequences. The researchers found that certain variants from Neanderthal DNA found in modern humans were linked to depression and addiction, as well as a condition actinic keratoses, urinary-system symptoms and a tendency for excessive blood clotting.

While it may be tempting to blame addiction and depression on our ancestors’ flings with Neanderthals, many researchers urge caution about these results. Dr. Nielsen:

The effect they report is a very small proportion of the genetic variance. It’s a few percent in a huge sample size of 28,000 people. Because we’re talking about genetic variation here the effect is not in one direction – so the study doesn’t show that you’re more (or less) likely to become ill because of Neanderthal DNA.

Sriram Sankararaman, a professor at the University of California, Los Angeles, echoed a similar sentiment in comments to GENeS, while also adding a note about the complexity of many human traits:

It would be incorrect to conclude from this study that Neanderthal DNA alone is behind risk of depression, or any of the other traits looked at in the study. Many of the traits which the authors looked at are complex so they are influenced by lots of different genes, each of which has a fairly small effect individually.

So while it’s still very uncertain what the effect is on modern humans, the evidence that early humans ‘co-mingled’ with other similar species is quite clear. It may feel uncomfortable to think of humans mating with other species, but the ubiquity of this behavior in nature only further reminds us that humans are part of the natural world and that classification tools and terms like ‘species’ are human constructs that are violated all the time in the wild.