Farmer: Why I choose to grow genetically engineered crops

A recent visit to the Toronto office of a prominent Canadian NGO to discuss that organization’s negative, one-sided portrayal of GE farm crops got me thinking about a recent comment from Tamar Haspel, a Washington Post journalist. She asked whether those of us who talk about the positives of GE (aka: genetically engineered, GMO, GM, or genetically modified) technology ever mention the negatives?

I acknowledge that supporters like me, facing an endless negative attack, are tempted to respond with the opposite; anti-GE activists emphasize the bad and we emphasize the good – while balanced analysis tends to be ignored by all.

That risk notwithstanding, this column is about balance – or more specifically, the balance as it applies to our farm

European corn borer and its successful control for 20 years using Bt technology is by far the biggest GE benefit on our farm. I recall, in years before Bt, the frustration of harvesting borer-infested, fallen corn plants and ears. I remember the at-harvest losses, the moldy ears, and the risk to my arms every time I left the tractor seat to remove fallen, tangled plants from the corn picker. (Yes, I shut the picker off mostly, but I confess there were some occasions when I didn’t as it was far easier to unplug with the machine running.) 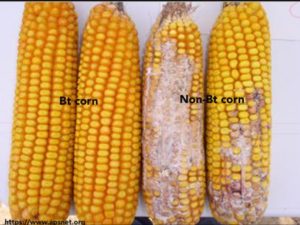 I watched with resignation during the early 1990s as many farmers in North America moved to insecticide applications for borer control, and wondered when we would be tempted or forced to do the same.

Now two decades later, I assume almost every corn plant will be standing for weeks after maturity, even as seeding rates and plant densities have increased to produce higher yields. To use those higher planting rates before Bt would have meant even more fallen plants and picker plugging.

Despite well over one billion acre-years of corn planted to Bt-borer-resistant corn in Canada and the United States, no insect resistance has evolved. Now, I am sure that genetic resistance to current Bt genes will eventually develop in European corn borer. Nature’s like that. And when that resistance comes, corn breeders and farmers will need to use new sources of gene resistance – that’s the hope – or revert to use of insecticides – the far-less-desirable default option. But 20 (and counting) years of Bt corn with no resistance apparent yet to corn borer is really a huge success.

Glyphosate-tolerant (GT) soybeans are the next most important GE crop for us. We have a problem weed called black nightshade which arrived about 20 years ago. Nightshade seeds germinate any time during the growing season; the plants grow quickly and produce dark purple berries which stain soybean seeds badly at harvest time. They can turn an otherwise top-yielding crop into something no one really wants. Fortunately, a late application of glyphosate on a GT-tolerant crop can ensure that the nightshade plants present at harvest time will have emerged too late to cause serious crop damage.

Like other farmers, we’ve learned that we must now apply other herbicides in addition to glyphosate to prevent/delay the appearance of glyphosate-tolerant weeds. But our total herbicide expenditure is still well below what would otherwise be required on this farm.

The inevitable question is: What happens when/if nightshade becomes glyphosate tolerant? That’s partly why we also use other herbicides – to reduce the odds of that happening – and why we fight hard to control nightshade in our other rotational crops. But farming’s like that: always new pest problems and an unending search for new solutions.

Glyphosate-tolerant (GT) corn, unlike its soybean equivalent, is a moderate blessing for us. We don’t rely on it as a core component of our weed-control program for corn. However, it does provide an effective means of eliminating weeds which escape control by herbicides applied at or near planting time. The benefit in controlling late-emerging weeds in corn is not for the current crop but to prevent weeds from producing seeds to infest the next year’s crop.  We have cut back usage of atrazine and other herbicides for weed control in corn – another benefit – knowing that we have an effective back-up plan with GE technology.

Those benefits are partially offset by the need to remove “volunteer” GT corn plants growing in GT soybeans the following year. Fortunately, that’s not difficult or expensive to do. So far the economic and agronomic benefit for GT corn outweighs the added cost, but it is less substantial than with soybeans.

Bt resistance to corn rootworm is probably of no current benefit on our farm. Indeed, it is a negative in that most GE corn hybrids we buy contain that trait and we pay for it through a higher seed price – I don’t think that much but it’s still a cost. The selection of hybrids containing Bt resistance for corn borer but not rootworm is limited and often does not include those with the highest performance in other traits – especially yield potential.

Corn rootworm can definitely be a problem in Ontario. During the 1970s, before soybeans became an adapted crop in most of the province, many farmers like us grew continuous, monoculture corn which fostered corn rootworm expansion. That necessitated the use of soil-applied granular insecticides. The introduction of crop rotations like corn-soybeans and corn-soybeans-wheat solved the rootworm problem in Ontario during the 1980s, well before the advent of Bt corn. But corn rootworm has evolved to tolerate corn-soybean rotations in parts of the US Midwest – and that may inevitably spread to Ontario. Maybe Bt rootworm resistance will benefit us in the future, but not now.

A bigger negative is overall seed cost:  GE seed costs more and that’s a major reason why some farmers grow non-GE corn and soybeans. For us, that cost is more than counterbalanced by higher crop yields and reduced herbicide costs.

Some critics say the need to repurchase seed every year is a negative with GE crops. That’s not true for corn since its hybrid nature means that farmers cannot replant their own harvested seed and expect to get plants of the same yield potential the following year. It’s been that way since before 1950 when virtually all Canadian corn became hybrid. Nothing changed when GE corn was introduced many decades later.

But soybeans are not hybrid and many farmers have historically kept their own seed for planting the following year. They can’t do this with herbicide-tolerant GE soybeans because they must sign a commitment not to keep seed for replanting when they purchase the original seed. If they want to reuse their own seed, they can grow non-GE varieties of which there are many.

Personally, I do not see the need to purchase seed every year as being negative to my long-term well-being as a farmer. The profits received by seed suppliers mean increased research to produce more competitive, higher-yielding, higher-quality varieties. The burst in productivity now being experienced with canola yields in Western Canada is the direct result of increased competition and more crop breeding – caused by the combination of patented GE technology and new canola hybrids. 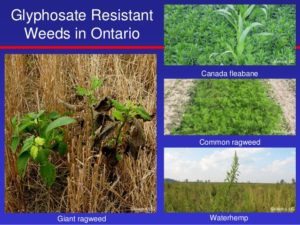 The development of glyphosate-tolerant weeds is widely cited as a negative with GE crops, and it is. We have none yet on our farm, but know their arrival is inevitable. However, we balance that negative against the positive – that there is a decreased likelihood of weeds developing tolerance to other herbicides, thanks to glyphosate usage. The first herbicide-tolerant weeds appeared on our farm about 40 years ago. Weed tolerance to herbicides did not begin with GE crops and glyphosate usage.

I’ll close this column with a brief listing of potential benefits with GE crops which we can’t realize because those crops don’t yet exist.

For 35 years we grew white beans (also known as navy beans and pea beans). White beans were very profitable but tricky to grow, and the increasing difficulty of managing nightshade in white beans ultimately caused us to stop producing them. In 2015, the last year, our herbicide bill for white beans was $93/acre and we still had more nightshade than I liked. Now if there were glyphosate-tolerant white beans….

Wheat is another crop we’ve grown for more than 30 years. In recent years it has required applications of fungicide – usually more than one per year. If not controlled, Fusarium infection will cause poisonous mycotoxins to form in wheat kernels. About 15 years or so ago, Syngenta had a research program designed to control Fusarium using GE technology. But strong opposition to GE wheat technology from many sources caused Syngenta to terminate the program. That’s so unfortunate – unless, of course, you profit by selling fungicides.

So what are the conclusions?

One conclusion is that the balance between benefits and costs/risks with GE technology is very farm specific and technology specific. It’s highly dependent on the needs of individual crops and the prevalence of crop pests. Second, benefit-cost balances are not static and change with changes in pests, plant genetic improvement, cropping situations and market conditions. And third, those who attempt to make sweeping generalized conclusions about GE technologies without understanding the on-farm complexities mostly lack any real understanding of what’s going on.

Terry Daynard is a grain-crop farmer near Guelph, Ontario, Canada. He’s a former professor of crop science and associate dean at the University of Guelph, and former executive vice-president of the Ontario Corn Producers’ Association. Twitter @TerryDaynard