If there is one thing that we know about genetically modified crops or organic crops, it’s that we don’t know what the definition of either is.

The lack of a single definition that can be adopted across the world has left the door wide open to let activists, trade organizations and industry to define it as they see fit. A proposal by a Danish group of scientists, ethicists and lawyers put a new spin on the contentious issue of defining what a GMO is, bringing up a host of questions and possibilities.

Will a plant with genes from its own wild counterparts introduced through newer breeding techniques – genes that it probably once had and were lost through many generations of conventional breeding — be considered organic?

The majority of plants used in organic farming were conventionally bred to select for traits that increased productivity and are not suited for organic farming where pesticide, herbicide and fertilizer usage is limited. Significant inbreeding during the selection process has led to loss of several beneficial traits such as salt tolerance or pathogen resistance which were originally present in the parents. With yields for crops used in organic farming lower than for GMO crops, the authors of a review in the journal Trends in Plant Science proposed that the most effective way to strengthen crop varieties and improve yield without depending on chemicals is the reintroduction of genes from wild relatives, a process they call ‘rewilding’.

The idea of genetic engineering has become a pariah, targeted by groups with an ideological rather than a scientific opposition to the technology. However, modifying plant genes is nothing new. As has been pointed out on the pages of the GLP, from seedless watermelons to orange carrots, we’ve been editing plant genomes for a very long time – albeit in a completely haphazard manner with radiation or chemical mutagenesis which can mutate hundreds of genes at once. Today, these genetically modified crops, eventually bred to select for favorable traits, are an integral part of organic and conventional agriculture. 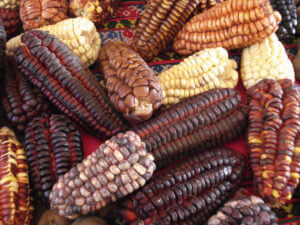 David Stern, president of the Boyce Thompson Institute for Plant Research summarized the situation as such in a comment to the Genetic Expert News Service (GENeS), which collected expert opinions on this issue:

In the early days of plant genetic engineering, it was easy to distinguish a ‘GMO’ from a ‘conventional’ plant, because GMOs generally sported traits that distinguished them dramatically from their forebears, such as resistance to Roundup or immunity to caterpillars (Bt). Conventional breeding, on the other hand, was used to gradually increase yield through an iterative “black box” process lasting a decade or more. As expertly described in the [published article], technology has outpaced (or outflanked) these black-and-white categorizations, leaving the organic community at a crossroads regarding how to best achieve its vision for food production.

Along with the technical feasibility, the article also tackles the ethical, social and legal implications of whether such rewilded crops would be considered GMOs in various countries and how likely organic farmers and consumers would be to adopt it.

The authors examined this aspect from several angles, first pointing out that ‘rewilding’ with the newer breeding techniques would be compatible with and even contribute positively to the core principles of organic agriculture as set out by the International Federation of Organic Agriculture (IFOAM) including avoiding use of chemicals, contributing to biodiversity and improving environmental quality.

“In current legislations, a plant is considered natural if it’s mutated by chemicals and radiation—that happens in nature,” said David Palmgren, one of the authors of the paper in the press release. “If you can make a precise mutation that has the same effect and you don’t introduce new material, then this type of plant should also be an exception.”

In a comment to GENeS, David Zilberman a Professor of Agricultural & Resource Economics at the University of California, Berkeley expressed hope that the technology would be accepted,

The definition of organic is not scientific, rather political, and since the approach described in the paper is more natural than transferring genes between species, they may be able to convince the organic community that it is kosher.

The authors also pointed out however, that because genetic engineering is used in the process, the organic community could see it as no different from current GMOs and would reject the technology.

And reactions from the organic advocacy groups suggest they may be right. Gina Kolata wrote about the ‘rewilding’ article in the New York Times

Brise Tencer, executive director of the Organic Farming Research Foundation in Santa Cruz, Calif., said she is skeptical of the idea that proponents of G.M.O.-free foods would accept precision breeding.

In 2015, an editorial published in the journal Nature on the issue of precision gene editing methods in agriculture pointed this out as well.

Plants without foreign genes can now be created with a variety of methods and technologies that precisely tweak or change the regulation of a native gene. Such plants should reassure anti-GM lobbies that criticize the moral right of scientists to ‘play God’, and the alleged instability of foreign genes. But environmental groups such as Greenpeace seem far from convinced. In January, several groups wrote an open letter to the commission insisting that new methods that change DNA structure or interfere with gene regulation in any way should also be subject to the EU’s tight GM regulations. They argue that the precautionary principle should continue to apply — and that because of the enhanced abilities of the technologies, the safety bar should in fact be raised.

To be clear, gene editing does have its limitations, as pointed out to GENeS by Julie Dawson, an organic agriculture researcher at the University of Wisconsin-Madison. “Many traits that are coveted, such as salt tolerance are “are not immediately amenable to gene editing, as phenotypes are determined by many genes and gene interactions with the environment.” However, where the technology offers significant advantages such as single gene traits, it should be considered a critical part of our ability to produce food sustainably for a growing population.

Arvind Suresh is a science communicator and a former laboratory biologist. Follow him @suresh_arvind.