[Editor’s note: The following open letter is in response to a letter sent to Agriculture Secretary Sonny Perdue signed by 22 House Democrats calling on the USDA to make sure federal GMO labeling standards include “all GMO foods, including foods which contain ingredients like highly refined sugars and oils, as well as foods produced with new genetic engineering techniques,” among other requests.]

I was deeply troubled by the recent letter you wrote to Sonny Perdue, Secretary of the US Department of Agriculture, regarding food labeling standards for Genetically Modified Organisms (GMOs).

It’s disheartening to see intelligent individuals on the political left like yourself continue to focus your efforts on this issue despite an overwhelming scientific consensus that indicates you are simply tilting at windmills.

In fact, among a list of 20 points of broad consensus among scientists regarding GM crops is that the Hawaiian papaya industry was saved by genetically modified papayas designed to be resistant to the deadly papaya ringspot virus. One of your own constituents explained how biotechnology rescued the Hawaiian papaya from the verge of extinction and urged you to change your position:

“When you made that quip about “GMO-free” in your mailer, it really shows me that you’re ignoring the farmers that were saved by biotech and fueling the attacks against their fruit that is no different than those GMO free ones.  Not all farmers are able to grow GMO free given the nature of this disease.  If you are really wanting those local and sustainable food supply for Hawaii, why are leaders such as yourself participating in attacks against people who are growing food in a local and sustainable way?  It just doesn’t make sense to me.  Representative Gabbard, you might want to know that nearly 95% of Hawaii’s papayas are GMO because the disease is so rampant here.  You’re speaking against the majority of the farmers here and it’s downright sad that you can ignore that.”

I proudly consider myself among the progressive left. I voted for Bernie Sanders in the 2016 Democratic Primary despite my disagreements with him on this issue because we share common values on so many other issues. Like Bernie Sanders and yourself, I too am greatly concerned about consumer protection.

But I don’t allow my skepticism towards big business entities to bias my view of the actual science behind GMOs. There is a profound inconsistency in the way the political Left markets itself as more pro-science than the climate-change-denying Right while simultaneously championing efforts like your unhealthy fixation on GMO labeling that undermines robust science with an even greater consensus than that of manmade climate change.

So what’s the real harm in this labeling campaign of yours? Shouldn’t consumers be informed what’s in their food? Of course they should. On the surface, it’s of course a reasonable-sounding argument. The problem is there’s already so much propaganda falsely implicating GMOs for all manner of unproven ailments. Labels further give the public the impression that the label exists to warn them of harm. Once the labels are there, GMO critics will then argue, “If GMOs are so safe, why did the government put warning labels on them?” This is the hasty generalization fallacy, or more commonly known as the “Where There’s Smoke There’s Fire Fallacy.”

Congresswoman, this campaign against GMOs is fundamentally anti-science, every bit as anti-science as Right-Wing campaigns denying the human-effects of climate change or opposing the teaching of evolution. Last year, 107 Nobel laureates signed a letter to Greenpeace urging them to end their opposition to GMOs. Scientific American, The New Yorker, and the The LA Times have all come out against labeling efforts. In Forbes, science journalist Kavin Senapathy concluded:

The undeniable reality is that the anti-GMO movement is organic industry-led, and it all begins with the lobby for mandatory labeling of products created with genetic engineering.

As I’ve written about several times, including here and here, there is no logical ‘right to know’ whether a food contains GMOs:

If we really want to label food based on breeding techniques, the only logical tactic would be to label ALL breeding techniques, including those that created our friends the sterile watermelons, atomic grapefruits, and others like hybridization, marker-assisted breeding, and more so-called ‘non-GMO’ techniques.

And even the lobbyists for the organics industry who are arguably the most vocal advocates for GMO labeling in the name of the public’s “right to know,” as you put it in your letter, hypocritically took steps to prevent the USDA from providing similar quality assurances for the organic food from which they profit.

When the subject of labeling GMOs came up in Vermont several years ago, plant pathologist and geneticist Pamela Ronald wrote an excellent article in MIT Technology Review, where she said:

“If Vermont had honestly assessed genetically engineered crops, the bill would have indicated that there is not a single credible report of dangerous health effects from GMOs and that there is no science-based reason to single out the resulting foods for mandatory labeling. It would have mentioned that the technology has been used safely in food and medicine for 30 years. It would have stated that farmers’ use of GMO crops has reduced by a factor of 10 the amount of insecticides sprayed on corn over the last 15 years, reduced food costs, decreased carbon dioxide emissions, and enhanced biological diversity.” 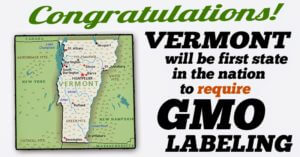 Make no mistake. Efforts to add warning labels to GM foods that have shown no indication of harm is every bit as corporate-driven as any efforts by the Koch Brothers or Exxon, etc. Those most benefiting from it are parties marketing so-called “organic” foods, a product that, contrary to the hype, offers no health or environmental advantage over the alternative.

It is a tremendous embarrassment for supposed “science-friendly” progressives on the political Left to maintain this preposterous position of advocating for labels that provide zero real world benefit to the public and that are so demonstrably based on unfounded concerns while products with far more legitimate bases for concern get ignored.

Congresswoman, your efforts in this arena are not only wrong-headed; they fly in the face of all the available evidence, stifle human progress, increase food costs for everyone, does immense harm to third-world populations, and denies the consensus of virtually all relevant reputable international science organizations, who universally agree that the process of genetic engineering is no more risky to human health than conventional agricultural processes.

Michael Rosch is a contributing science writer and filmmaker, and volunteers with the New York City Skeptics. Follow him on Twitter @Skepacabra.