Do GMOs, pesticides cause cancer? The Amish would say ‘no’

The Amish have been an insular people in the United States for nearly 200 years, ever since they arrived from Switzerland and other parts of Europe to avoid religious persecution. Many non-Amish assume that since they avoid such modern technologies as telephones, automobile, and even zippers, the Amish must also eschew genetically modified crops and pesticides.

These assumptions came out in a blog that appeared in the anti-GMO website Natural News and other sources, claiming that a study showing low cancer rates among Amish in Ohio meant that the people’s simple living practices, including using organic (and non-GMO) farming, were making them healthier.

Another important factor not specifically examined in the study is the fact that the Amish grow and raise all their own food. They employ time-tested, organic methods that provide them with healthy fruits, vegetables, milk, meat, and other untainted foods that most Americans never get. Rich in living enzymes, vitamins, and nutrients Amish food is grown and raised the way it should be, resulting in improved health. While some may ridicule their secluded lifestyle, the Amish commitment to simple, productive lives and clean, local food is benefiting their health in ways that the rest of America can only dream about. When compared to a life of sitting in office buildings all day, eating processed and genetically-modified junk food, and popping prescription medications, it becomes clear which lifestyle is truly deserving of contempt.

Contempt aside, Natural News did get one thing right: the Amish indeed do have lower cancer rates than do other Americans. And they mostly followed the researchers’ conclusions on what may be leading to these rates: more exercise, less reliance on labor-saving devices, avoidance of tobacco.

But here’s where Natural News is wrong: the Amish use pesticides, and they use genetically modified crops in their fields. Enthusiastically.

This BBC video shows an interview with an Amish farmer, who, with his back against the camera due to Amish rules about being photographed, discusses the advantages of Bt corn in his fields. Another Amish farmer from Pennsylvania talked to Wired about his use of genetically modified tobacco, engineered to prevent the biosynthesis of nicotine. “Amish law doesn’t say anything about growing genetically modified tobacco,” farmer Dan Diener said.

While many Amish farmers are starting to adopt organic practices, due to the higher price premiums and increased consumer demands, there have been obstacles. Some of these obstacles are true for all organic farmers; the higher overall cost of inputs, the three-year period before they can sell certified organic food. Another challenge is ironic; Amish farmers see organic as a new technology, and some are reluctant to adapt to it. 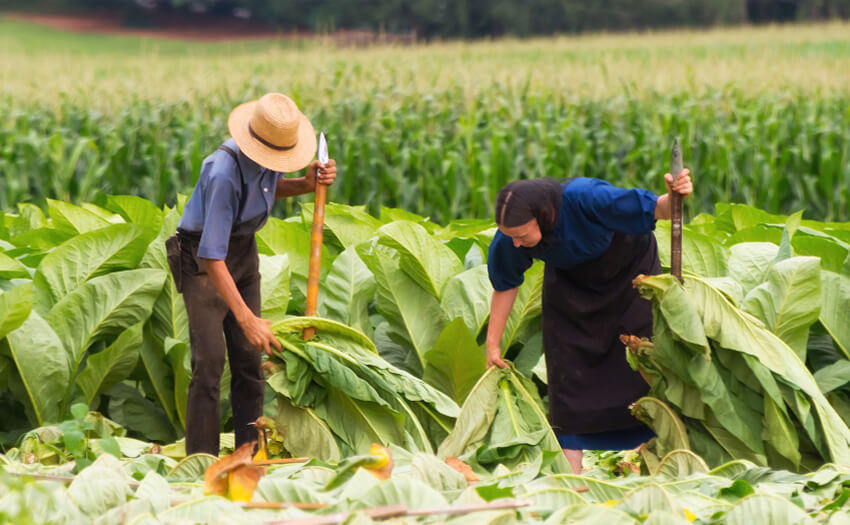 About that cancer study

Back in 2010, researchers from Ohio State University conducted the first attempt at cancer epidemiology among the Amish. They found that 191 cancer cases had been recorded among Ohio Amish between 1996 and 2003.

The reasons for this? Avoidance of tobacco might help contribute. Also, few Amish go through cancer screenings, deeming them unnecessary, so some figures might be artificially low. But a bigger reason might be endogamy.

Being a cultural isolate, the Amish intermarry. And like many groups that intermarry, they suffer from rare genetic diseases more than other, “out-married” populations. The Amish have very high rates of certain diseases almost unheard of in other populations, such as SCID (severe combined immunodeficiency disorder), at rates of one in four, compared to one in 40,000 in the general population, and “Maple Syrup Urine” disorder, a recessive and potentially fatal metabolic disease. Since they arrived from Switzerland in the early to mid-1800s, they have been an isolated population, and carry mutations for these diseases due to a “founder effect,” which happens when a group is created by very few individuals. Intermarriage then furthers a number of deleterious genes through generations. But not all genes and traits furthered through endogamy are bad.

Among these groups, such as Ashkenazi Jews and certain Arab populations, some rare disorders and mutations may protect against certain cancers. Certain mutations may run lower or higher in certain populations, leading ultimately to lower (or, as in the case of Ashkenazi Jews and breast cancer, higher) rates of cancer. Sometimes these mutations may provide some advantage of survival, either by protecting against rare diseases, or perhaps by proffering more indirect benefits, such as breast cancer mutations among Ashkenazi Jews that appear related to higher production of dendrites in the brain, and overall higher IQs.

But whatever the cause, it’s not “no cancer,” it’s “less cancer.” And the reasons may have more to do with not smoking, and a genetic compromise that reduced cancer but increased the risk of rare disorders.