For several years now I’ve discussed why you should never trust Moms Against America. The organization is run by Zen Honeycutt, someone with zero scientific training that makes a living by harming farmers and indicting scientists that work for public good. She also is against vaccination and raises money to fund billboards mom-shaming parents into buying organic food.

Now she has set her target on orange producers, and I’m officially abandoning my gentle persuasion and as we say in the hockey arena, I’m “dropping the gloves”.

This report is inexcusable, it is disgusting and it harms an industry that is already collapsing. What is she trying to do? 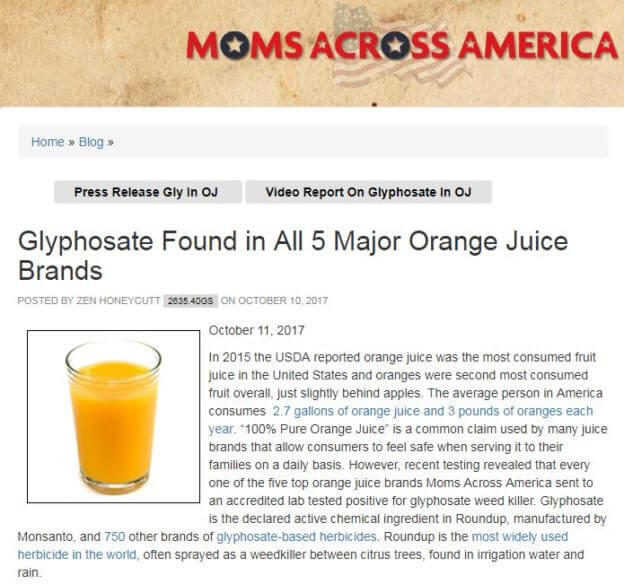 From her comfortable well-appointed home in California, Zen Honeycutt, someone demonstrated to lie about science, attacks an industry that is taking a beating from disease and hurricanes.

Zen Honeycutt has a history of falsifying information to advance her agenda of scaring parents away from food. In the past she has promoted knowingly forged data on residues on corn and also promoted highly suspect data about glyphosate in breast milk, a claim that was shown to not be supported by scientists that study contents of breast milk.

She now targets orange juice, a key component of the American diet, a much needed daily serving of fruit in a world of caffeinated energy drinks.


A Fruit Crop is Dying

Aside from the shift away from fruit juice due to market forces and cultural trends, the Florida citrus crop is dying from citrus greening, a disease driving the industry into ruin. Production is at 50 percent of what it was a short time ago. Solutions are in the works at many levels.

Then Hurricane Irma then stripped the trees of a lot of what was left. his was a devastating year for our growers.

So here Zen Honeycutt takes on an industry that is supplying an important fruit serving. The crop is dying, the situation is critical, and she screams that a “probable carcinogen” is in your OJ.

Honeycutt certainly accepts the lone IARC decision of “probable carcinogen” ignoring the dozens of independent evaluations by many countries, and the scientific literature that says there is no strong evidence for carcinogenicty.

The lead scientist in this determination was paid $160,000 and hired lawyers to start suing the manufacturer of Roundup before the decision was even rendered, so this looks like a clear pay-to-smear set of allegations.

The IARC decision is counter to every other government, company (many companies manufacture it, each has done their own tests), and academic assessment of glyphosate, they did not find reason for concern. (and FYI, the IARC says alcohol and grilled meat are known carcinogens)

The numbers they present, if true, which they likely are not based on Honeycutt’s trend of presenting false data, are far below any risky levels. 5 parts per billion is five seconds in 32 years.

They also don’t show a non-glyphosate control. There are plenty of places growing OJ without glyphosate. While the claimed LC/MS-MS method is a good way to measure glyphosate, what is the background level in non-glyphosate treated plants? What else elutes at the same time? No controls, just numbers to scare. Claims in the MAM Article The verbiage presented around the claimed presence is a sick distortion of the scientific literature.

Not only is the work cited typically suspect (it appears she’s resting on the highly criticized work by Kruger and Seneff), other conclusions are twisted. For instance she claims, “1 part per trillion has been shown to stimulate the growth of breast cancer cells.” She neglects to mention that this is in a Petri dish. Glyphosate is a water-soluble molecule. It is applied in parts per million and even if you consumed it, it would move through the body in stools and urine. I discussed glyphosate pharmacokinetics with a toxicologist/physician on my podcast.

The Lab that Did the Work

And the work was done by John Fagan (signed off on the bottom) long time anti-GMO crusader. Independent lab? Hardly. Fagan is recognized as a Raja of the Global Country of World Peace with Global Responsibility for Food Purity and Invincibility and Minister of Agriculture in the Maharishi Movement.

How he fits that on a business card I’ll never know.

Fagan has a long career dedicated to finding stuff at the edge of nothing, and then using those claims to instill fear about food. He was the founder of Genetic ID (a GE crop identification project) and was an early board member of the Non-GMO Project.

No controls, no published methods, from an activist lab — This would never be accepted by peer-reviewed literature, which is why it is only on an activist website with a history of lying to the public.

I have to ask myself, is she completely obvious or knowingly lying?  The video is a clueless rant that ignores everything known about glyphosate and even fundamental science.

She claims that glyphosate gets into oranges because it is taken up by the roots, when we know that it is not taken up well at all.  She says they didn’t test organic orange juice because they wanted to test only the top brands. My guess is that they “found” it in organic too (there’s likely a product at the same place as glyphosate that they willingly misinterpret, again, without that control, who knows?).

She also continues the same bogus claims, like glyphosate is found in rain. A claim long debunked by me!

The bottom line is that Zen Honeycutt wants to harm American Farming. She lives in a delusional bubble of happy farms where immigrants toil in the hot sun to remove the weeds to ensure she gets her high-priced food that has other residues that can’t hurt you either.

This is more anti-glyphosate tripe. The tip off– they keep calling it Monsanto’s roundup. Few citrus growers use Roundup. They use glyphosate. The generic is much cheaper, so they use that. It is not made by Monsanto, it is made by one of dozens of other companies.

Honeycutt must Monsantoize this to invoke fear of technology, fear of safe, good fruit products– or more importantly, connect the bogus data to Monsanto. 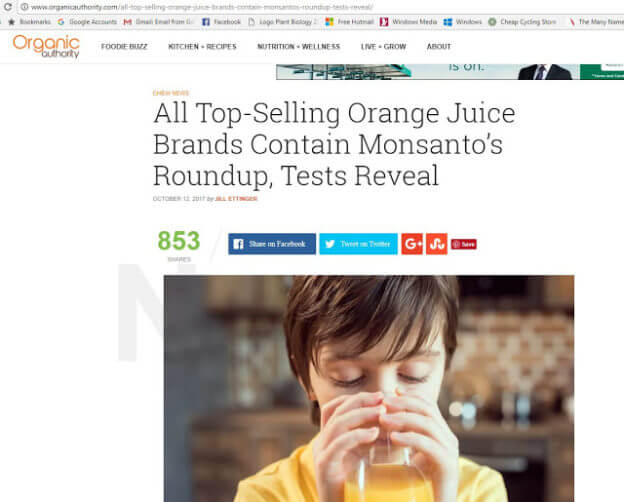 835 shares. About what? False data manufactured by people known to fake data. Why would anyone trust them with their family’s health?

And to the Orange Juice Industry…

This is exactly why I hate that all of the major brands capitulated to labeling orange juice “Non-GMO”. There are no genetically engineered oranges, at least none other than those in greenhouses and behind barbed wire that look perfectly fine in the presence of disease pressure. The food activists are horrible people that lie to the public with the intention of harming industries. Now they have targeted orange juice. Sorry about that.

The best move would be to make strong statements about the safe use of herbicides in the industry, the likely bogus data here, and the fact that if it was true, the levels are below inconsequential.

As time goes on Honeycutt is recognized more and more as a crackpot activist that has a clearly rotten agenda. She is generally recognized as someone that will falsify data for her cause and ignore science that does not agree with her interpretations.

She also is glad to attack scientists like Shelley McGuire, and silence them (like she did me by blocking and erasing my soft, scientific comments) when they engage questions on her website.

More alarmism from known data fabricators and questionable laboratories, this time sadly targeting a crippled industry to continue their crusade against a company that sells corn and soybean seeds.

I’m glad this story hit with a whimper and didn’t get much interest.

Kevin M. Folta is a Professor and Chairman of the Horticultural Sciences Department at the University of Florida. He teaches science communication workshops for scientists and ag professionals, and hosts the weekly podcast Talking Biotech. Follow him on twitter @kevinfolta

This article was originally published at his blog as “Moms Against America Targets OJ” and has been republished here with permission.