This article or excerpt is included in the GLP’s daily curated selection of ideologically diverse news, opinion and analysis of biotechnology innovation.
The East African cooking banana is one of the major food crops eaten by the people living in central Uganda.

In the recent years, the plant has been hit by a number of pests and diseases, including nematodes, black sigatoka and banana bacterial wilt. To  combat these problems, scientists at the National  Agricultural Research Laboratories (NARL) in Kawanda, near the capital city of Kampala, have been breeding new banana varieties, using modern biotechnology. They’ve also been developing a GM banana fortified with vitamin A and iron.

These genetically engineered bananas are in various stages of development. But the vitamin a version has reached the point where scientists are ready to taste it. This simple act, they say, is a key piece of the product development process. It’s where they make sure the new fruit is similar to ordinary bananas before it is rolled out to farmers, said Dr. Jerome Kubiriba, the head of the institute’s banana research program. 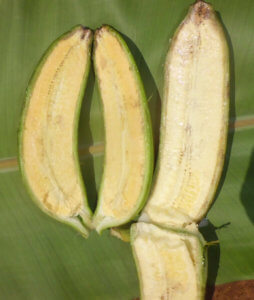 Kubiriba and his team are submitting an application to the National Biosafety Committee, governed by Uganda National Council for Science and Technology, asking for permission to cook and consume their GM banana.

In laboratory testing, these bananas have proven to contain half of the vitamin content needed by children and pregnant mothers, he said. The next step is to move the plants closer to farming communities to see how they grow in field trials at different geographic locations. But part of that evaluation process demands that someone cook and eat the bananas.

Kubiriba said the international scientific advisory committee responsible for overseeing scientific research procedures has given its assurances that the team in on the right track. The committee is comprised of professors from research institutions across the globe, who meet once a year to make assessments of products presented for scientific comments.

Committee members are often invited by scientists to observe what is going on during the research process. Communication is often handled by Skype to verify that researchers are following required standards in order to avoid rejection of the final product.

One potential roadblock is the uncertainty surrounding Uganda’s proposed Biosafety law, which is still under scrutiny and clarifications as requested by Uganda’s president. The new law will need to be in place if the bananas are ever going to make their way into farmers’ fields. Still, Kubiriba is optimistic that his team will be allowed to taste its new bananas.

The initial tasting will be done by a panel of scientists taking part in breeding two varieties of the banana, called Nakitembe and M9. Later, the testing would be expanded to include members of the public.

The process will involve cooking the GM variety side by side with a traditional variety. Test participants will eat both, without knowing which is which.

The program to breed the new bananas started in 2005. This was after scientists determined that a good number of children and pregnant mothers in rural areas are deficient in vitamin A, said Dr. Priva Namanya Bwesigye, head of the institute’s biotech labs.

Most of the processed food containing vitamin A is found in urban areas. So, it was deemed critical to figure out way to get the critical nutrient into the diets of rural communities. The team accessed genes with beta–carotene from non-edible banana varieties from Southeast Asia. These were isolated and introduced through genetic engineering to local cultivars, Nakitembe and M9.

There were initially 800 lines at the NARL confined field trials. The team selected two lines with traits similar to those of the conventional variety, but also with enhanced vitamin A properties. According to Bwesigye:

We have checked using molecular methods that the gene exists in the banana varieties, we have also confirmed from the banana bunches at the field trial site because the banana, if peeled, the color has changed to pinkish. We have also ensured that the banana plant grows true to the traditional type with the initial traits remaining intact, apart from introduction of Vitamin A gene.

Lominda Afedraru is a freelance science journalist in Uganda who specializes in agriculture, health, environment, climate change and marine science. Follow her on the Daily Monitor web site www.monitor.co.ug, Facebook or Twitter @lominda25.