This article or excerpt is included in the GLP’s daily curated selection of ideologically diverse news, opinion and analysis of biotechnology innovation.
Over the past months, the European Union and several member nations have vigorously debated re-authorizing glyphosate, the herbicide maligned by anti-GMO and pesticide activists.

Recently, the European Union — without anything near the debate surrounding glyphosate — decided to reauthorize the fungicide copper sulfate, a popular pesticide among organic farmers that has a more toxic rap sheet than glyphosate.

The European Commission and its member states reauthorized the use of copper sulfate, a widely used pesticide in organic farming but which also is used in some conventional applications, although the European Food Safety Authority (EFSA) and European Chemicals Agency (ECHA) considered toxicity risks for farmers, birds, mammals and soil organisms, and the chemical’s overall environmental impact. This decision extended permission for the use of copper sulfate in the EU, against bacteria and fungus.

Copper sulfate is used a great deal in organic farming, especially with potatoes, grapes, tomatoes and apples. In comparison, glyphosate — one of the world’s most popular herbicides — is focused on weed control and is not used in organic farming. Instead, it has attracted the attention of anti-GMO activists and members of the EU because it works hand-in-hand with genetically modified crops bred to resist it.

But which is safer?

In addition, the European Food Safety Authority (EFSA) pointed to risks to farmers, birds, mammals and soil organisms. Both the EFSA and the US Environmental Protection Agency say more data is needed on the potential health effects on consumers.

While organic food does not contain as much pesticide residue as conventionally grown food, copper sulfate is the most common pesticide residue in organic food, according to a 2015 European Parliament research report. It is bio-accumulative, meaning it can build up to toxic levels in the soil and possibly even animal tissue. In fact, many organic wine growers, in the US and in Europe (including France) have opted out of their organic designation in order to use alternatives to copper sulfate fungicide. Their fears? Accumulation of the chemical in soil.

The European Commission, when it extended copper sulfate use in 2014, did so on the condition that its use would be reduced and other environmental studies would be carried out. In 2015, the EU listed the same chemical as a “candidate for substitution” due to concerns over its effects on health and the environment. It was this extension that expired in January, and was re-extended by the EC.

So far, however, no realistic organic alternatives have been created. According to the European Parliament report: “Some promising alternatives include potassium bicarbonate (which is safe for humans and the environment) and milk by-products. In the meantime, restrictions limit the use of copper salts.”

Meanwhile, glyphosate has shown no bioaccumulation, and next to no toxicity, except for possible health problems among workers who are exposed to very high doses of the pesticide. Only one agency — the International Agency for Research on Cancer — has connected glyphosate to health problems (in this case, cancer), through a methodology that is not risk-based, and through a process that has gathered accusations of unrealistic results to outright corruption. 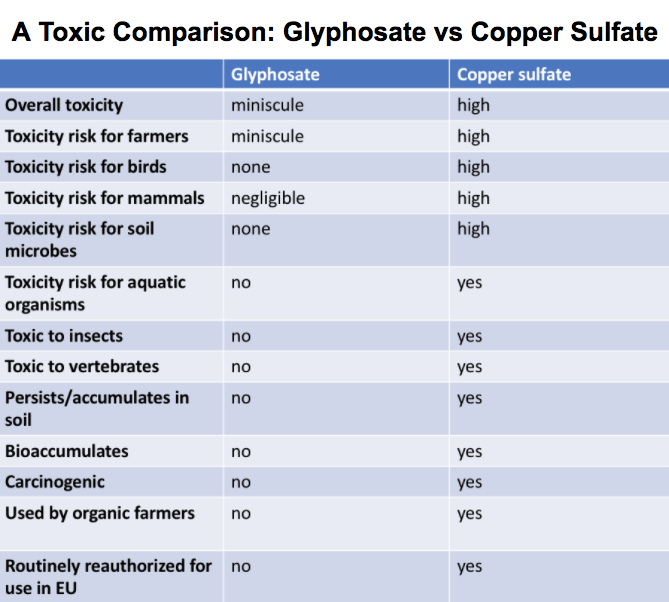 This comparatively healthy profile did not prevent the European Commission and member states from seriously considering banning glyphosate in Europe. Eventually, the herbicide’s use was re-authorized, although the European Parliament has vowed to re-evaluate pesticide approvals in the wake of criticism from certain member states (which themselves have moved to ban glyphosate) and anti-GMO groups that have long opposed glyphosate’s existence as a legal agricultural chemical.

Glyphosate also does not have an alternative that possesses the same ability to kill weeds as well as the same low toxicity profile. Copper sulfate, meanwhile, can be used by conventional farmers, though they tend to prefer other fungicides.

Copper sulfate has a history. Steve Savage, a San Diego, California-based geneticist, remarked that “copper sulfate was a state-of-the-art fungicide, in 1885!” Its use began in the early 1880s in Europe, as wineries began noticing downy mildew in their plants. This raised more than a little fear, because it was the same type of infestation that resulted in the great Ireland potato famine, just 40 years previous.

Savage talks more about this history in his webcast, “Plants Get Sick, Too:”

There was a fellow named Pierre Millardet who was a professor of botany at the University of Bordeaux. In October of 1882 he was driving his carriage along a road in St.-Julien. The vineyards he passed were a sad sight, and as a Frenchman and a plant scientist, he was concerned about the future of the crop. But Then he noticed one vineyard by the road that looked much healthier than the rest. The vines still had leaves. He stopped and looked closer. The leaves and fruit looked good, but were covered with a powdery blue substance.

He found the vineyard manager and asked what was going on. The manager explained that he and other growers in the area had grown tired of having people come along the road and steal their grapes. So, they had come up with a mixture of copper sulfate and hydrated lime to spray onto the grapes by the road to make them look unappealing.
What Millardet realized was that in an effort to prevent theft, these growers had accidentally discovered a “medicine” for the vines – what we now call a fungicide.

Since, copper sulfate has  been used in organic farming as an allowed synthetic substance (most modern copper comes from reusing non-iron scrap metal in a factory and then precipitating the compound from sulfuric acid), as well as in conventional growing. In California, the largest agricultural region in the United States, 54 different variants of the chemical are used, largely for fungal disease control. Some of these uses include rice production, fighting walnut blight, and in aquatic control of algae (this is a big part of its use in rice, too).

According to a 2015 USDA technical report on copper sulfate, it is registered with the EPA for these uses: