This article or excerpt is included in the GLP’s daily curated selection of ideologically diverse news, opinion and analysis of biotechnology innovation.
Synthetic biology has become the new frontier of genetic engineering, promising to radically change the way we make clothes, fragrances, flavors, biofuels and plastics. Utilizing yeast, algae, microbes and bacteria as tiny manufacturing plants, it may help us produce meatless meat, non-animal leather and even clean up oil spills. We could find our way to greater sustainability by replacing plastics, metals and wood through fungi and bacteria.

And while the subject may sound arcane, many of us already have come face-to-face with what this technology has to offer. Consider all the attention given to one of the darlings of synthetic biology: the meatless Impossible Burger that’s been popping up at restaurants across the land. (More on this later)

The promise and potential was covered by Newsweek last summer:

Cells could be engineered to make meat in a lab, eliminating the need for environmentally intensive and often cruel factory farms.  Bacteria could be manipulated to secrete oil, providing a truly renewable source of liquid fuel.  Yeast could be designed to produce artemisinin, a vital antimalarial drug that in its natural form must be made from limited supplies of the sweet wormwood plant.

“What is at stake here is finding a way to make everything humans need without trashing our civilization. We can transition from living on Earth to living with Earth,” said Drew Endy, a Stanford synthetic biologist, told the magazine.

This is perhaps why synthetic biology has captured the attention of investors and venture capitalists, who have been pouring money into a plethora of start-ups. Leading the way is Ginkgo Bioworks, which has raised $429 million in capital since its founding in 2008, including $275 million in December 2017. Among its investors in December was Cascade Investment, the private investment vehicle for Bill Gates. Ginkgo has achieved unicorn status – a private company valued at over $1 billion.

Ginkgo’s researchers are developing yeast and microorganisms that can create fragrances, sweeteners for beverages, cosmetics and industrial enzymes used in laundry detergents. The company has formed several partnerships to help it develop its product line.

In September 2017, for example, Bayer and Ginkgo signed an agreement in which Bayer will provide $100 million to assist in Ginkgo’s development of microbes for improved nitrogen fixation. The goal is to lower the cost and the environmental impact of farming and decrease reliance on nitrogen fertilizers. Also in 2017, the firm partnered with Swissaustral, a leader in the development of enzymatic products and processes, to design microorganisms that will produce industrial enzymes. Gingko also has agreements with Cargill and Archer Daniels Midland to create nutrients that will be added to animal feed.

Gingko also is producing a rose scent for the French fragrance company Robertet.

Producing the scent via genetic engineering is cheaper and less time consuming than the traditional method, which involves squeezing oils from flower petals.

“Ginkgo is essentially this automated platform for designing and printing DNA and using that to edit the genes of microbes to make them do new things,” said Jason Kelly, the CEO and co-founder of Gingko. He also predicted that “synthetic biology will soon be disrupting every industry that deals with physical materials.”

Related article:  Would you agree to be infected with COVID for science? Intentional 'challenge' studies underway as researchers explore new vaccines and treatments
Follow the latest news and policy debates on agricultural biotech and biomedicine? Subscribe to our newsletter.
SIGN UP

Among the other firms drawing the attention of investors – and in the latter case, the public – are Bolt Threads and Impossible Foods, with its meatless burger.

Bolt Threads is working on yeast that can produce spiderweb-like fibers for fabric and garments. Since its founding in 2009, it has raised $213 million including $123 million at the end of 2017. Among its investors are Fidelity Management Research Company, Allen and Company and Temasek (one of Singapore’s sovereign wealth funds). Already the company is marketing a synthetic spider silk tie. The material is produced through genetically modifying yeast, water and sugar and then turning it into silk through fermentation. It has also partnered with designer Stella McCartney to create pants and bodysuits from its spider silk. 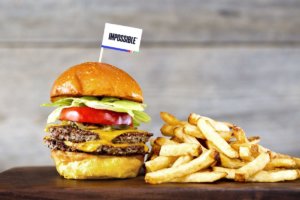 Impossible Foods has raised $275 million in financing, pulling in money from an investment group that includes Temasek, Cascade Investment and UBS. The company has designed a meatless hamburger through genetically engineered yeast, capturing headlines across the mainstream media, with the Washington Post asking: Is this the beginning of the end of meat?

According to the company’s website, it produces a burger using 95 percent less land, 74 percent less water and 87 percent less greenhouse gas emissions than using a cow. The company is selling its burgers at hundreds of US restaurants and has announced plans to enter the Asian market this year.

Here’s a brief rundown of other firms that are active in this space:

Among the pioneers of the field is Dr. Richard Kitney of the Imperial College of London. He sees a sort of unlimited potential, when consider the possibility of using living things to make other things – some of which, don’t even exist at present.

“Synthetic biology has all the potential to produce a new major industrial revolution,” Kitney said.

Viewpoint: Tribalism and COVID—Many progressives rejecting the science on lockdowns and becoming major hindrance to return to near-normalcy