Viewpoint: Nigeria must rely on science to find its way through the GMO debate

This article or excerpt is included in the GLP’s daily curated selection of ideologically diverse news, opinion and analysis of biotechnology innovation.
The global evolution in science has lead to the emergence and adoption of agricultural biotechnology in some parts of the world. Advances have helped researchers produce seeds and crops capable of withstanding pests, diseases, extreme temperatures and the impact of climate change. The rapid adoption of these genetically modified crops in developed countries such as USA, Brazil, China, India, Argentina, Canada and South Africa has resulted in a significant impact on the agricultural sector.

However, the introduction of agricultural biotechnology in Nigeria and the journey towards adopting GM crops for Nigerian soil have been greeted with much hysteria and anti-GMO controversies. This is not surprising. The nation’s broken educational system has given its people a poor understanding of science and biology. Nigerians often have difficulty distinguishing between fiction and fact in the realm of GMOs. Some of the major areas of controversy includes; environmental impacts, food safety, market and economics.

Thus far, there has been little progress in realm of  GM crop commercialization in Nigeria. The regulatory agency that is saddled with regulating GMOs in Nigeria – the National Biosafety Management Agency (NBMA) – has announced that several GM crops are currently undergoing field trials in different parts of the country. And in late July, regulators announced that two varieties of BT cotton have been approved as part of an effort to revive a struggling textile sector. Already, seeds have been distributed to more than 1,000 farmers.

On the issue of environmental impacts, there’s a widely spread fiction by anti-GMO lobbyists that the use of GM crops will create superweeds. But science tells us that GMOs and the herbicides they are designed to work with are not responsible for creating so-called superweeds. These herbicide-tolerant plants have been around far longer than GMOs – and often are the result of overreliance on a particular herbicide when treating a field. It is also a false belief that genes can flow from GM crops and pollute other crops in the environment. Gene flow takes place between all crops whether GM or non-GM. Conventional hybrid crops can readily pollute local GM crops varieties. 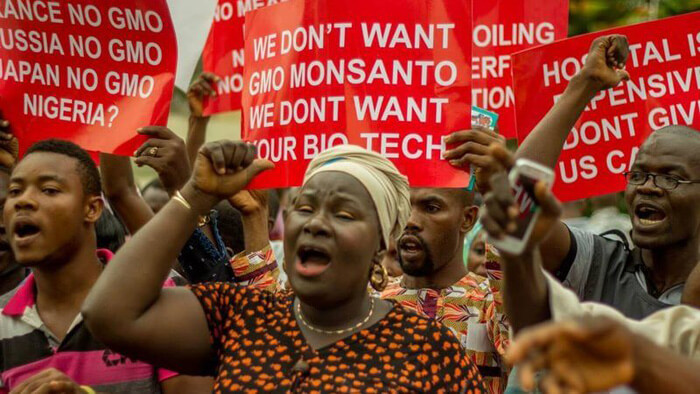 The idea that GM foods are unsafe and unhealthy without any scientific evidence has continued to spread among many Nigerians like wild fire. It is noteworthy to mention, that in the history of humankind no food has been subjected to such rigorous tests and field trials as those derived from GM crops. Yet, many people have died as a result of allergies and toxins from conventional crops. Nonetheless, in our fertile continent, South Africa is the largest producer of GM crops in Africa and is ranked ninth in the world. Staple foods such as GMO maize have been consumed for about 20 years with no effects on human health. The Food and Agricultural Organization (FAO) stated in 2004 that “No deleterious effects from consumption of foods derived from GM crops discovered in anywhere in the world”. Equally, in 2010 the EU Commission directorate for research stated: “No new risks to human health or the environment from any GM crops commercialized so far”.

Another major area of controversy on GMOs is market issues. It is widely believed that GM crops are just a ploy of the multinationals to make more money and become sole owners of seeds. Well, it’s also a well-known fact that farmers are savvy people. No farmer will buy seeds if they won’t turn a profit, and nobody is forcing farmers to buy seed from companies. Again on the issue of seed ownership, Nigeria should encourage indigenous scientific enterprises and agencies to domesticate GM seed varieties. This will discourage importation and help boost our foreign reserves. In India for example, about 30 indigenous companies have the “Bt gene” in their crop varieties.

The world`s population is currently pegged at 7.6 billion people. By 2050, it is expected to reach 9 billion with unprecedented growth in Africa. How do we cope with the population explosion?

Sadly, Africa`s agriculture is exposed to many risks, including pest and diseases, climate change and drought. This poses a great threat to food security in Africa with its burden in Sub-Saharan Africa. Agricultural biotechnology among other solutions holds a pivotal role in salvaging Africa`s “food cargo” and in breaking the walls of famine.

With these two strategic institutions in Nigeria, National Biotechnology Development Agency (NABDA) and National Biosafety Management Agency (NBMA) the ground is set for the adoption and use of GMOs in Nigeria. Ensuring food security requires the promotion of inclusive communication strategies across all stakeholders, policy makers and researchers while ensuring a synergy between all actors. An effective partnership between the private and public sector must be encouraged to enhance the adoption of GM crops.

Nigeria has been trapped within the grips of poverty and gross underdevelopment. Agricultural biotechnology can contribute towards eliminating hunger and poverty by doubling agricultural productivity and the income of rural small-scale farmers. Nigeria must ensure a rapid paradigm shift in its policies and economy by integrating science and technology. We must engage in science.