This article or excerpt is included in the GLP’s daily curated selection of ideologically diverse news, opinion and analysis of biotechnology innovation.
Here’s a somewhat boring fact you might already know about cotton: It doesn’t make a good food, for humans or animals. Glands throughout the plant produce a toxic pigment called gossypol that limits its use as feed stock.

For humans, we only use cottonseed oil, the processing of which negates the toxin. As a feedstock, cottonseed meal and crop residue is useful, but you have to be careful about rations to avoid toxicity. It’s safe for cattle, but not for hogs or poultry. You can let cattle graze a cotton field after harvest, but you don’t want to let your bull join in for a reason we’re about to get to. General signs of acute toxicity are similar among animal species and include respiratory distress, impaired body weight gain, anorexia, weakness, apathy, and death after several days.

But if managed well, cottonseed meal and cotton residue can help cattle farmers put the full product of a cotton harvest to use profitably. Cottonseed hulls have about 17 percent less protein than soybean hulls, but soybeans hulls cost about 25 percent more.

Here’s a fun fact that I’ll bet you didn’t know about gossypol: It was developed in some countries as a contraceptive for men. At the proper doses, it induces sterility, without acute toxicity. But over time the sterility becomes permanent. The long term side effects were problematic and this line of research has been abandoned.  So you can understand why cottonseeds, similar to little peanuts and chock full of fat and protein haven’t caught on the way sunflower and pumpkin seeds have a snack or the basis of a buttery spread like tahini (sesame seeds) or sunflower butter. And you can see why you wouldn’t want your bulls eating cottonseed meal. 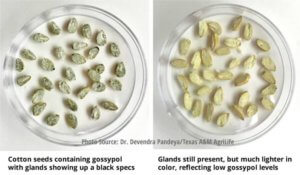 So the fact that cotton produces gossypol reduces the value of cotton as a crop. If you could use cottonseeds as food for humans the way you can for sunflowers or use it without careful rationing as a feedstock, that would be a boon to cotton farmers. In fact, for every 1 pound of cotton fiber — the product, the plant produces 1.6 pounds of seed — the byproduct. Imagine if you were a farmer being able to produce straight up 2.6 pounds of product for sale instead.

A glandless cotton plant was developed from a strain found on a Hopi Indian reservation in Arizona in the 1950’s but languished until the Rogers Delinted Cottonseed Co. of Waco, Texas started a breeding program to try to develop a commercially viable glandless cotton in 1967 in partnership with Texas A&M. Success came in the mid-1980’s. The UPI reported at the time:

The kernels would be roasted for ‘Cot-N-Nuts.’ They also can be flattened into flakes. The roasted kernels taste somewhat like sunflower seeds. They can be eaten as a snack food, ground into flour or blended to make glandless cottonseed butter similar to peanut butter, the company said.

Unfortunately, the early version of glossypol-free cotton did not catch on. Though that shouldn’t have come as a surprise. Cotton produces glossypol for a reason. It doesn’t just induce sterility in bulls and men. It produces sterility in insects that nibble on cotton. This isn’t quite the pest control strategy of producing a neurotoxin like caffeine in coffee or cacao (which also produces theobromine, the reason you don’t feed chocolate to dogs) or nicotine in tobacco, which kills those nibbling insects. But creating sterility in your predatory rivals is a pretty decent strategy to keeping infestations manageable. Cotton farmers find this useful, as you can imagine.

Then in 1995, Keerti Rathore, an Indian plant breeder with a PhD from the University of  London arrived at Texas A&M to pick up the mantle of edible cottonseed. 23 years later, he’s nearly there. Rathore’s team used RNA interference (RNAi) to silence a gene in the cotton plant to stop the plant from developing the glands that produce glossypol in the seeds, but not in the rest of the plant. In 2006 he filed and in 2011 was granted U.S. Patent #7,999,148: ‘Cotton plant with seed-specific reduction in gossypol’. The patent application characterizes the innovation in this way:.

The method generally includes selectively inducing RNA gene silencing in the seed of a transgenic cotton plant, to interfere with expression of the δ-cadinene synthase gene or the δ-cadinene-8-hydroxylase gene in the seed of the cotton plant without substantially affecting expression of that gene in the foliage, floral parts, and roots of the plant.

Once the trait had been well characterized in 2006, greenhouse work began in order to find the best plants from the many lines they have produced. Once those lines were identified, field trials began, leading up to the recent approval by the USDA’s APHIS office of the ultra-low glossypol cotton for commercialization of production. For the seeds to be sold as food or feedstock still requires approval from the FDA.

As to the potential for the project, “It’ll taste like hummus,” Rathore said. “It’s not at all unpleasant.”

It will be several years before farmers can grow it commercially, as seed supplies have to be ramped up starting next season, said Kater Hake, a vice president at Cotton Inc., which does research and marketing for growers and funded the project.

There’s a lot of protein in cottonseeds—enough to meet the daily requirements of 600 million people should all cotton in the world be replaced with edible varieties, Hake said by telephone.

As a tree nut, its nutritional value is similar to other nuts, like almonds or walnuts. Food technologists have experimented by making cottonseed milk, crackers, cookies, nut butters and chopped-nut substitutes, Hake said. The protein could also be extracted and made into a powder that can go into energy bars or flours, Rathore said.

The industry is also targeting aquaculture, according to Hake, because cottonseeds can be fed to carnivorous fish like salmon and trout that eat ground-up fish. Cotton would be a low-cost alternative that can replace up to half of all fishmeal. It’ll also help farmers, who will be able to sell the seeds, currently considered a near useless byproduct.

In all, about 10 million metric tons of protein are contained in that amount of seed.

It’s no coincidence that it was an Indian born researcher who made his way to Texas A&M to pick up the mantle of the breeding work that began there in the 1970s.

Rathore’s real goal, though, is to see it growing in places like India, where he grew up; places where a lot of people aren’t eating well. “A lot of these countries that do suffer from malnutrition are also cotton producers,” he says. “So I think that those countries may benefit much more from this technology.” China and India are the world’s two top cotton-growing countries.

For India the estimate for the 2017-18 cotton crop is 6.3 billion kg of cotton fiber. If that was grown with this new cotton, that would come with an additional 10 billion kg of edible cottonseed packed with 2.2 billion kg of protein. In none of the news reports that I’ve read has anyone really pointed out how revolutionary it could be for Indian farmers if they could produce the equivalent of a harvest of cotton and sunflower seeds simultaneously in the same field, at the same time, with the same resources. It’s a big deal.

What’s striking here is that the idea of breeding cotton for edible cottonseed wasn’t some gee whiz inspiration of the biotech era; this is a project going back 70 years. It’s always worth noting that while our current technologies are producing novel solutions, the problems have been with us for a long time. We’ve been producing cotton with cottonseed packed with fat and protein that we just couldn’t fully utilize going back 7,000 years ago to the Kachi Plain of Balochistan, Pakistan, in the sixth millennium BC.

Likewise, if you thumb through a seed catalogue for organic farmers and gardeners, the characteristics they tout for their seeds address the same issues over and over: disease resistance, frost resistance, pest resistance and germination timing. Elsewhere the needs are similarly straightforward: salt tolerance, drought tolerance, flood tolerance and greater nutrition for staple crops. Of the big agronomic breeding challenges, only herbicide tolerance is a challenge novel to contemporary times. At the grandest scale, achieving the efficiency of photosynthesis in crops like corn and sugarcane for any crop and nitrogen fixation for any crop seem to verge on science fiction for their ambition, it remains the case that those dreams merely involve moving what nature already does into a wider range of crops.

Climate change and a growing, increasingly well-fed population pose novel challenges every day. It’s a bit of a paradox that meeting those challenges so often involves solving problems that have been with us for a long, long time.