Patrick Whittle | January 29, 2019
This article or excerpt is included in the GLP’s daily curated selection of ideologically diverse news, opinion and analysis of biotechnology innovation.

In Gökhem, Sweden, the locals were powerless to stop the foreigners flooding in. Migrants from the east were bringing with them strange new customs and languages — and new genes — to swamp those that had resided there for generations.

No, this isn’t modern anti-immigration propaganda, stirring up populist indignation about Europe’s recent refugee crisis. Actually, it’s ancient history — the aftermath of a devastating plague pandemic that swept through Gökhem’s Stone Age farming community nearly 5,000 years ago. Or so the latest genetic evidence from nearby neolithic burial sites suggests — that a strain of pneumonic plague (the earliest yet discovered) caused the local population to crash and eventually disappear as new peoples migrated in from the Eurasian steppe.

Human migration is nothing new. Politically at least, that’s one take-home message from this recent Swedish research. But these old bones and their DNA also lend support to a much wider social/political theory — one that seeks to explain the ultimate reasons why we live in a world of obvious ‘haves’ (e.g., Western Europeans) and ‘have-nots’ (e.g., refugees and migrants from the Near East or Africa). However, before examining this thesis about the historical causes of modern human inequality, we need first to fill in more details about disease in stone age Europe (and elsewhere).

The dramatic decline in the indigenous prehistoric populations of remote Scandinavia — and their subsequent replacement by culturally and genetically dissimilar peoples — mirrored earlier events in other parts of Europe, where a collapse of established neolithic communities 5,000-6,000 years ago is clearly evident in the archaeological record. The significance of the Gökhem graves, however, is that they provide hard evidence of a likely cause: millennia-old genetic traces of the plague bacterium, Yersinia pestis, amongst the disinterred remains.

This deadly disease likely originated in the crowded agricultural settlements that emerged around 6,000 years ago on the edge of the Black Sea. Sped along trade routes by the newly invented horse-drawn cart, the pathogen is thought to have then scythed its way westwards through the vulnerable stone age inhabitants of Europe — thus clearing a path for the new settlers who followed in its wake.

Much later, following Europe’s global expansion from the 1400s onwards, a similar process of population collapse/replacement was repeated on an even more momentous scale. After first contact with European sailors and explorers, a tsunami of death swept over the native inhabitants of lands previously isolated from the infections that had (literally) plagued Eurasia for millennia. By some estimates, over 90 percent of the indigenous peoples of the Americas were wiped out within decades of the arrival of Europeans, who were themselves partially immune to the deadly contagions that they carried with them.

Similar tragedies occurred elsewhere, most especially in those places — Australia, say, or the Pacific Islands — whose remoteness had left the locals unexposed to the sicknesses afflicting more interconnected regions. Even as late as the 20th century, appalling epidemics could decimate isolated communities; almost a quarter of the population of Samoa, for instance, died when influenza swept through the islands in late 1918.

Yet while the fatal impact of disease can be readily understood today, another explanation for the expansion of Europeans at the expense of indigenous peoples was widely accepted in the past — one that was, inadvertently, given scientific sanction by a certain Charles Darwin. Indeed, this explanation for Europe’s domination of the world was presaged in the sub-title of Darwin’s seminal work, On the Origin of Species: ‘The preservation of favoured races in the struggle for life’. Although not Darwin’s intent, it is hardly surprising that obvious inequalities between different peoples were soon accounted for in simplistic Darwinian terms: that Europeans were the ‘fittest’ of the human races, against whom the ‘less favoured’ races were doomed to defeat in the ‘natural’ struggle for existence. The awful apogee of this line of thinking, of course, was the Nazi belief in an inevitable race-based ‘war of all against all’, in which ‘superior’ human beings would eradicate their ‘sub-human’ inferiors.

Given this odious history, all-encompassing biological explanations for human difference — and their supposed social and political consequences —  have largely disappeared from acceptable public discourse. And here we may return, at long last, to the social/political theory of human inequality alluded to above, one that apparently derives support from the recent research into plague in neolithic Europe. 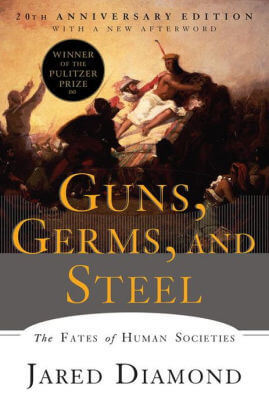 In his influential Guns, Germs & Steel (1997), UCLA biogeographer Jared Diamond provides a breathtakingly broad explanation for why some peoples have fared better than others over the course of history. Diamond’s motivation is made clear right from the start: that, unless a convincing explanation for the “glaring, persistent differences in peoples’ status” is provided, many people will assume that earlier racist biological explanations — such as those regrettably associated with Darwinism — must be correct after all. Diamond summarises his argument in a single sentence: “History followed different courses for different peoples because of differences among peoples’ environments, not because of biological differences among peoples themselves.”

And yet there is one ‘biological difference’ that is crucial to Diamond’s thesis: immunity to disease (the ‘germs’ in the title of his Pulitzer Prize winning book). According to Diamond, the presence of domesticable plant and animal species in some places (such as Mesopotamia) but not others (such as Australia) allowed large and sedentary human populations to develop. These large population centers, in turn, provided a breeding ground for diseases, to which the locals eventually evolved partial immunity. And, as occurred in the Americas — and in plague-ravaged neolithic Europe — the expansion of pestilence-resistant peoples into new territories was facilitated by the fact that many of the indigenous inhabitants had already been wiped out.

Nevertheless, these are not the ‘biological differences’ that Diamond has most in mind. Rather, Diamond is concerned with refuting the widespread belief that social inequalities between different peoples are due to commensurate differences in cognitive abilities. His thesis, therefore, is much wider than simply ‘germs’; instead, it provides a detailed environmentalist account of how and why significant technological developments (such as ‘guns and steel’) occurred more especially in Eurasia than elsewhere.

In brief, Diamond argues that, just as larger agricultural populations led to greater disease-resistance, they also allowed for greater division of labour, in turn facilitating greater technical innovation. Furthermore, in the same way that plague and immunity spread more easily across the Eurasian landmass, so too did ideas and technology (the disease-carrying Europeans who expanded across the world after the 15th century, for example, were fed by an agricultural system that arose in the Middle East and armed with gunpowder invented in China). The important point, however, according to Diamond, is that these cultural and technological advances were ultimately the result of advantageous features of Eurasia’s geography and ecology, not any advantageous traits possessed by Eurasians themselves.

Of course, such broad-brush historical speculation, however plausible it may seem, does not equate to a genuine scientific theory and further focussed research is obviously needed — in particular, research that may serve (in principle, at least) to ‘falsify’ Diamond’s wider arguments about the ultimate causes of human inequality. Diamond therefore proposes several possible means of developing the ‘guns, germs and steel’ thesis into a true ‘science of human history’. For instance, numerous ‘natural experiments of history’ have placed the same peoples in different environments, thus controlling for genetic effects on social outcomes over time. One such a natural experiment is the huge contrast in social development amongst the genetically identical Polynesians in different settings, from egalitarianism on the Chatham Islands to the strict social hierarchies of pre-contact Hawaii; other examples include the divergent outcomes for the same peoples (Haitians and Dominicans) on the same island (Hispaniola) due to the separate socio-political histories of each group.

Of course, as is often the case with questions of nature versus nurture, multiple genetic and environment effects, amplified immensely in our species by culture and history, will have been at play in determining the world as it is today. The devastation wrought by disease, for example, is clear — and that this has been occurring in hominin populations for millennia is becoming increasingly evident. What is still not fully appreciated, however, is the knock-on effects over time; for instance, the evidence from Gökhem is that the original peoples were replaced by new peoples. But we do not know how long or in what form the disappearance of these original ‘Swedes’ took — whether, for instance, they were reduced to marginalised populations, much as many indigenous peoples are today (or whether, indeed, even earlier inhabitants had suffered the same fate).

Nevertheless, while the recent Swedish study lends support to Diamond’s thesis, other research — such as the persistent findings of cognitive differences between different groups — appear far less compatible with Diamond’s argument, at least as it stands. The point, though, is that however incomplete Diamond’s theory is as yet, it adds a more multifaceted dimension to often simplistic accounts of social disparities (such as those fuelling some political arguments against modern migration).

Yet since the publication of Guns, Germs & Steel, new techniques allowing the study of ancient DNA have revolutionised our ability to unravel the knotty details of our species’ complex story. Geneticist David Reich’s Who We Are & How We Got Here (2018), for instance, provides a sweeping account of human history that is as breathtaking and ambitious as Diamond’s, though from the perspective of cutting edge genetics. How much this new understanding may help in explaining inter-population inequalities is as yet unclear, but – as both Reich and Diamond would argue – scientific facts do not dictate moral values.

These facts, though, could help in making the world fairer for all.